Elections are a symbol of hope and freedom, and the right to vote is an expression of belonging and of having a voice. We trust our electoral systems to preserve an immutable record of the voices we have raised, and the choices we have made. Yet the concept of “one person, one vote” is more than just a legal right enshrined in a system. Free and independent elections stand as recognition of our humanity.

“Our families were targeted. A lot of people were killed. Soon after there were elections. Some things we saw as little kids were very shocking. Just the picture of somebody forcing you to vote at gunpoint.”

This is how Nimit Sawhney describes India in 1984, after the assassination of the Prime Minister. To experience those times was eye-opening in the most terrible of ways, but it instilled in Nimit a reverence for the sanctity of the electoral process that informs his work today. Nimit is now the co-founder of a company called Voatz, which is pioneering the use of blockchain technology to secure modern voting platforms. 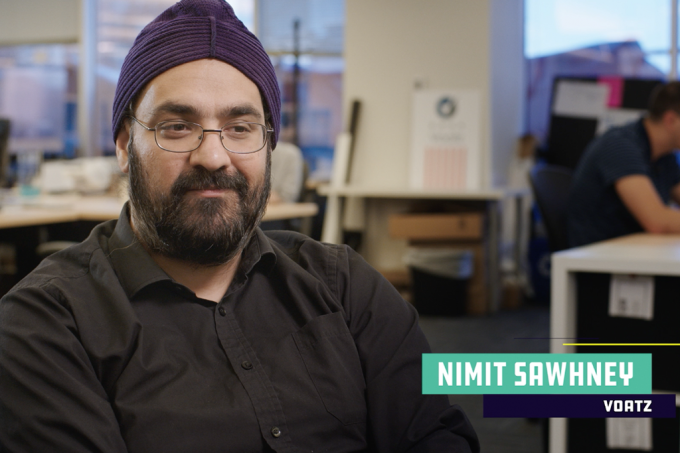 What blockchain offers to the electoral process is a combination of accuracy, transparency, and immutability. The applications are virtually limitless, and government is certainly not the only realm within which important elections take place, where security is paramount, and where blockchain can make a difference.

There is also a logistical side to what blockchain technology makes possible. Elections traditionally favor in-person participation, and absentee voting brings with it innumerable challenges. But in West Virginia, Director of Elections Donald Kersey and Secretary of State Mac Warner are concerned about enabling voting access for uniformed service members stationed overseas. So much so, that they’re willing to embrace an innovative new technology like blockchain.

“When it comes to our uniformed service members, they don’t have the same kind of access to our polling places that people here in the state do. And they don’t have scanners or fax machines or printers that you would need under traditional electronic ballot delivery processes. Which is why we were willing to break down the barriers and do something that’s completely new.” —Donald Kersey, Director of Election, West Virginia No matter the arena, voters deserve trust. They demand it. Yet across the globe, we’ve seen too many elections hacked, manipulated, and stolen. Can blockchain return trust to the electorate? That’s the question we try to answer in Episode 2 of our Built on Blockchain documentary series. Watch “One Block, One Vote” today, and you decide.

“It’s incumbent upon us all to keep changing and enhancing our concept of democracy. Regardless of your political affiliation, if more people vote, if everybody votes, that’s a fair fight.” —Nimit Sawhney, Co-Founder and CEO, Voatz