If you’ve ever tried to share a conversation you had with Alexa, you probably took out your smartphone then recorded a shaky mobile video of you talking to your Echo speaker. That may work for the occasional tweet, but businesses looking to showcase their Alexa skills may want a more professional solution. A company called Sayspring has created just that. It’s launching Voicegram, a way to record an Alexa conversation in the browser, then easily share that conversation as a video file.

The idea for Voicegram came about because Sayspring’s team saw that this was something its customers needed.

The company, which offers software that allows designers to prototype voice apps without coding, is today being used by a number of businesses, including Coca-Cola, Liberty Mutual, and Quanta Airlines, for example. Currently, Sayspring lets its customers save and share an interactive voice app prototype, but not the full conversation between a skill’s user and Alexa.

“One of the things we’ve seen a lot of people do – and we do all the time – is share the conversation,” explains Sayspring founder Mark Webster. But today, that means a recording a video of an Echo device. “The idea was to make it a lot easier to have an interaction with Alexa, and then share it,” says Webster. He says this will not only be useful for designers and developers collaborating on building voice skills, but on promoting the finished products, too.

“If you’re a developer and you’ve created an Alexa skill, how do you showcase it? How do you put it on your blog? How do you write a Medium post about it?,” Webster asks. 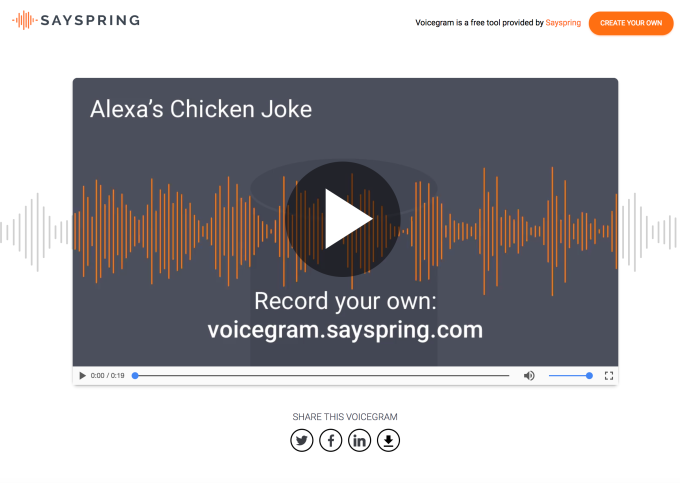 Creating a Voicegram is straightforward and simple.

From the Voicegram website, you just login with your own Amazon account information, then give the app permission to access Alexa Voice Service by clicking “Allow.” Once that’s done, you click the microphone icon to start your recording, and then click a button to stop the recording when you’ve finished.

On the next page, you can give your Voicegram a title and enter the email address where you want to receive the Voicegram when it’s complete, a process that takes just a few minutes.

The Voicegram can be posted on your website, blog, or shared out to social media, as you choose.

The solution is similar to Echosim.io, a tool for developers that simulates Alexa in the browser, also using Alexa Voice Services. The difference is that Voicegram is designed to offer more than a tool to talk to Alexa in the browser, but also a way to share that conversation with a wider audience. Voicegram viewers can also choose to re-share the Voicegram themselves using the included Twitter, Facebook or LinkedIn sharing buttons.

There’s even an option to download the video file directly.

The larger plan is to bundle Voicegram into Sayspring’s prototyping software, so users can customize the resulting Voicegram’s background, or add the client or agency’s logo, for instance. It will also offer more workflow collaboration tools at that point – like commenting or feedback mechanisms.

But for now, Sayspring just wanted to get Voicegram out there and see how people use it.