Over the past year, TechCrunch has experienced a significant uptick in its off-platform video viewership—growing 260% year-over-year.*

Braintree, an innovator in the mobile payments space, was the first brand to take full advantage of this new and growing audience through its partnership with TechCrunch Disrupt San Francisco 2016.

Braintree was the title partner for TechCrunch Disrupt SF. Among the many elements of their robust activation—custom-built video content, an onsite food truck, a hackathon API workshop, and digital media exclusivity, just to name a few—one of the most crucial elements was Braintree branding included on all Disrupt video that was posted to TechCrunch’s off-platform channels.

Whenever a Disrupt video was posted to Facebook, Twitter, Periscope, YouTube, and Instagram, a Braintree logo was featured. When and how long it was featured varied depending on the platform (different platforms have different rules and best practices). This included VOD (video on demand) as well as live video. 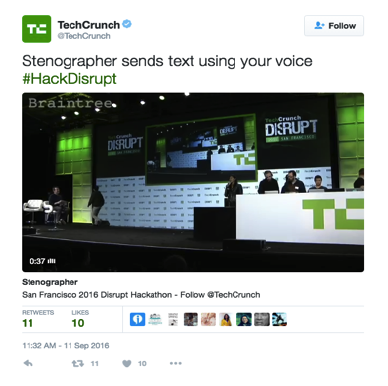 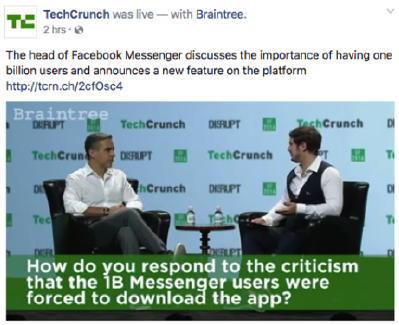 This simple yet powerful brand integration not only extended Braintree’s reach to millions more viewers, but also forever aligns Braintree with Disrupt SF 2016, as their logo is a permanent part of the video, no matter where or when it’s viewed.

At the time of this partnership, sponsor branding on social video was a relatively new offering for many platforms and publishers. Branding rules and guidelines changed often as both sides experimented with what worked best for clients without disrupting the viewer experience.

It was crucial that TechCrunch remain nimble in how we approached off-platform brand integrations, as well as maintain an open dialogue with the AOL sales team, Braintree, and Noble People, Braintree’s agency, to communicate changes and our recommendations for getting the most out of TechCrunch’s growing off-platform audience.

Thanks to the many teams involved in nurturing this strong partnership, Braintree and Noble People felt confident that TechCrunch could execute a never-been-done-before initiative. And oh did we deliver!

Over the course of five days, TechCrunch published dozens of VOD and live Disrupt videos, which generated a whopping 9.8M video videos across all platforms—A record high for Disrupt and almost 5x that of Disrupt SF 2015. Of these, 94% took place on off-platforms, Facebook being the largest contributor. And Braintree was part of it all.** 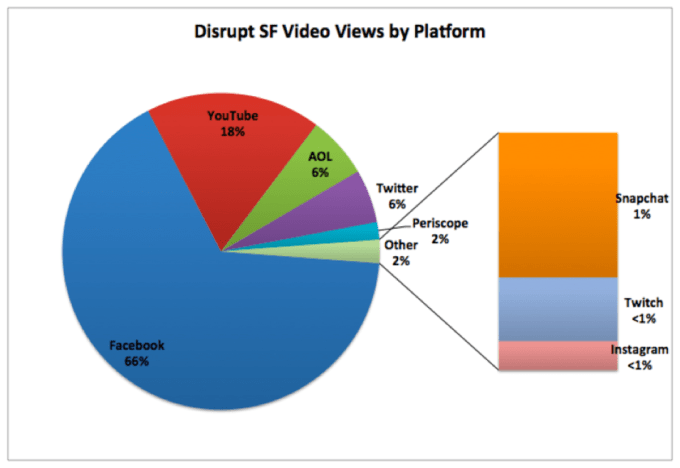 Needless to say, TechCrunch’s first venture into off-platform video branding was a great success, and thanks to Braintree’s and Noble People’s willingness to try something new with a trusted partner, they were at the forefront.

There are three upcoming Disrupts in 2017—Disrupt New York in May, Disrupt San Francisco in September, and Disrupt Berlin in December. To learn more about to get involved in either a media or event partner capacity, fill out this form to get in contact with us.