Long gone are the days when a consumer electronics company could simply announce a phone and call it a day. At this morning’s big launch event in Beijing, Xiaomi followed up its foldable news by handing the stage over to CyberOne. The bipedal humanoid robot joined Lei Jun onstage, greeting the CEO and handing him a long-stem flower.

At first glance, the robot isn’t exactly Atlas or Digit, in terms of locomotion, but it’s still a promising demo and very much not a person in a spandex suit (not that anyone would do that). It’s the latest sign of Xiaomi’s growing robotics ambitions, which began with vacuums and have since expanded to include last year’s Spot-esque CyberDog.

We’ve seen plenty of consumer brands flex some robotic muscle at events like this, including Samsung and LG, so it’s tough to know where CyberOne falls in the spectrum between serious pursuit and stage spectacle.

I was both nervous and thrilled to interact with him on stage. What did you think of his performance tonight? #CyberOne pic.twitter.com/Je1eXDYEGR

Lei Jun was quick to flex the company’s investment in the category, noting, “CyberOne’s AI and mechanical capabilities are all self-developed by Xiaomi Robotics Lab. We have invested heavily in R&D spanning various areas, including software, hardware and algorithms innovation.”

Humanoid robots rely on vision to process their surroundings. Equipped with a self-developed Mi-Sense depth vision module and combined with an AI interaction algorithm, CyberOne is capable of perceiving 3D space, as well as recognizing individuals, gestures, and expressions, allowing it to not only see but to process its environment. In order to communicate with the world, CyberOne is equipped with a self-developed MiAI environment semantics recognition engine and a MiAI vocal emotion identification engine, enabling it to recognize 85 types of environmental sounds and 45 classifications of human emotion. CyberOne is able to detect happiness, and even comfort the user in times of sadness. All of these features are integrated into CyberOne’s processing units, which are paired with a curved OLED module to display real-time interactive information. 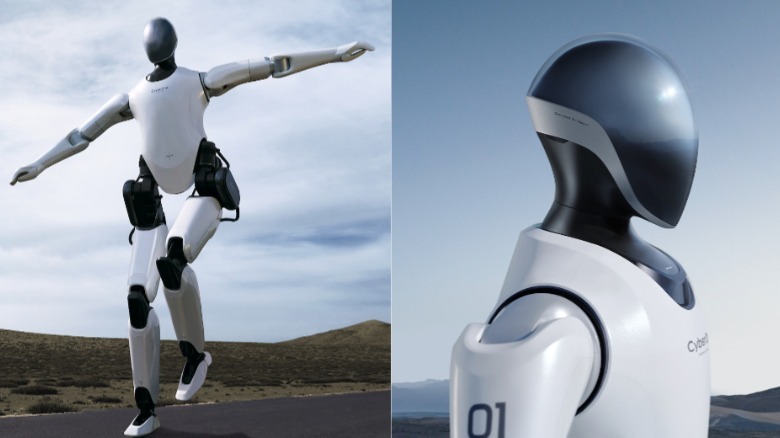 Equally broad are the promised real-world applications, ranging from manufacturing assistance to human companionship. There will be plenty of use for both of these feature sets in the future, but that’s a long walk (so to speak) from today’s demo. For the time being, it probably makes the most sense to view CyberOne as something of an analog to, say, Honda’s Asimo: a promising experiment that’s serves as a good brand ambassador for some of the work being done behind the scenes.