The newsletter monetization platform Substack announced on its blog today that it’s testing video uploads in private beta. Like existing newsletter posts, creators can decide whether they want to keep videos behind a paywall or not. Though this feature is only available to select users at the moment, the company said that it will “be rolling out video to everyone in the coming weeks.”

This feature would add another creative way for newsletter publishers to keep their subscribers engaged. For example, Substack pointed to the famed songwriter Patti Smith, who posted a video of herself performing a piano-accompanied version of her song “Peaceable Kingdom” — she appears to be sitting in her home, singing into her webcam. Other creators have participated in the private beta test by uploading cooking videos and recordings of roundtable conversations. 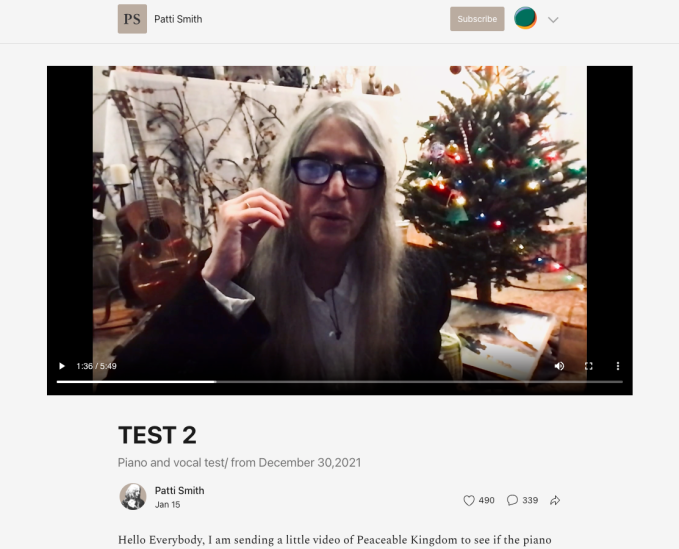 With this feature, Substack writers can record or upload videos directly on the platform, whether they’re publishing from mobile or the web. Videos can be up to 20GB, supporting 3GP, AAC, AVI, FLV, MP4, MOV and MPEG-2 file types. In email versions, the video will appear as a clickable image. Like free previews of text posts, writers can select a preview snippet of subscriber-only videos to show as a teaser.

“As with everything on Substack, you own all of the content and it’s connected to a mailing list that you fully own and control,” the company wrote.

Before the wider rollout, Substack is still taking requests for more creators to join the private beta test.

Is Substack really worth $650M?