When Christopher Male’s son was diagnosed with Autism Spectrum Disorder (ASD) in 2018, the long-time investor found himself in unfamiliar territory.

“At the time, I literally knew the word ‘autism,’ and that was about it,” he recalls.

In an effort to help his son, Male immersed himself in the topic and found what he described as an “incredibly fragmented and polarized community and marketplace, inadequate, antiquated solutions with hefty price tags and long wait lines.”

He determined there was “no scientific understanding of what was happening in the marketplace.” In part driven by capitalism but mostly driven by an eagerness to help his child and others like him, Male dove in and, earlier this year, teamed up with Brian O’Callaghan to found the Autism Impact Fund (AIF). The fund’s mission is to “revolutionize the status quo for diagnosing treating and living with autism through a venture-capital model.”  So far, AIF has invested in seven early-stage companies.

AIF brought in Rob Sarrazin from GlaxoSmithKline (GSK) to serve as its chief investment officer and managing partner. Male and Sarrazin manage the fund’s day-to-day operations.

The need is there. Autism Spectrum Disorder (ASD) impacts 1 in 54 children and millions of families around the world, according to the CDC.

“We created the Autism Impact Fund with the ambition of becoming the investment and innovation arm of the autism community,” said Male. “This is just a massive societal issue with a system that is very, very broken, and our goal is to change that system.”

For nearly a decade, Male operated his family’s investment office. He then launched his own venture fund. But he admits there has been no role in his life more important than his current one.

AIF has enlisted a high-profile group of advisors, including Uber CEO Dara Khosrowshahi; Jennifer Frist of the Frist Center for Autism & Innovation at Vanderbilt University and Bob Nelsen, co-founder and managing director of ARCH Venture Partners, among others.

While Male declined to reveal AIF’s LPs, he said they include high net worth institutions and family offices. The fund is actively fundraising so Male could not comment on those plans, other than to say things were going well.

“The market for us has been quite positive and on track, so we’re further ahead than we thought we would be,” he said.

AIF makes direct investments across a variety of sectors, such as biology, environment and behavior, and stages of financing. It is intentionally focused on for-profit companies so that its work doesn’t overlap with nonprofits.

“This is not just a group of individuals. We’re professional investors,” Male said. “We’re also bringing together the community through academics, government institutions, nonprofits and foundations.” 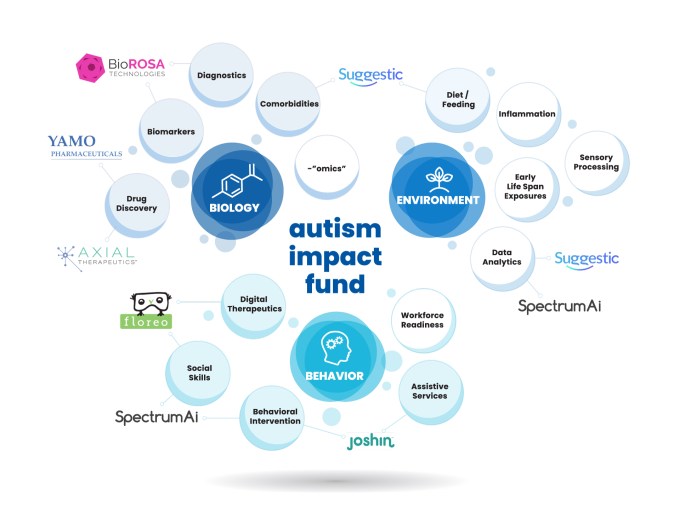 Portfolio companies include Axial, which is developing gut-restricted small molecule agents intended for the treatment of core autism symptoms; BioROSA, which is developing a biomarker for autism; Floreo, which provides a range of therapies through an AI-driven virtual reality platform; and Joshin, a digital care platform for people with special needs whose funding TechCrunch recently covered.

John Slattery and Marie Causey founded Boston area startup BioROSA, which is developing a biomarker that aims to detect ASD in children as young as 18 months, in 2018.

“That would bring down the average age of diagnosis, which is currently four plus years and is very skewed with minority and less affluent populations not doing well with that,” Male told TechCrunch.

BioROSA has raised just north of $3 million, including a round in which AIF participated in July.

“There is strong academic research that supports the thesis that this company is built on,” Slattery said. “Our goal is to allow for early detection, and transform the diagnostic standard of care.”

For families with autism, the investments made by AIF could be life-changing — and you can’t get much more meaningful than that.