In Frequency Therapeutics’ short lifetime as a company, it’s had its ups and downs. On Tuesday, during an R&D event day, the company unleashed a slew of announcements that add context to the development of a flagship hearing loss drug, and proposed some directions.

Founded in 2015, Frequency Therapeutics has focused on a regenerative medicine approach to hearing loss. The approach is centered on revamping progenitor cells that eventually become key sound-conducting hair cells in the cochlea. The irreversible disappearance or damage of these hair cells contributes to sensorineural hearing loss — the most common type of hearing loss.

On Tuesday, the company made several announcements regarding its FX-322 — its drug candidate for hearing loss. Frequency highlighted pooled data from early trials suggesting the product has lead to clinical benefits, and suggested that a Phase 2 study’s discouraging results were due to poor study design. Then, it unveiled a new hearing loss product, and a multiple sclerosis drug program.

A side note: Frequency measures success of its drug based on “speech perception” rather than an ability to simply hear sounds. Other trials on cochlear implants have used this endpoint, and Chief Scientific Officer Chris Loose, says that the company has “alignment” with the FDA on the utility of measuring hearing drugs this way.

Over time, these results have held up, said Carl LeBel, Frequency’s chief development officer. Unpublished durability data from five participants that have been followed over one to two years found that three subjects are still seeing statistically significant improvements, he told Tech Crunch.

“That, to us, suggested some subjects are able to maintain the benefit. That benefit may last a year, it may last two years. We just have to monitor more patients that show this improvement, but it really suggests a disease modifying benefit,” said LeBel.

But the good news on FX-322 has been tempered. A Phase 2a clinical trial suggested the drug had not shown any improvement in hearing loss compared to placebo.

That study was conducted on 95 participants, half of whom received four injections of the drug, while the other half received placebos. There were limited improvements in both groups and the company reported there was “no discernible benefit” of the drug in that trial.

Shares of Frequency dropped from $36 to $7 the day the news was announced, and have remained well below previous highs since. In response, some shareholders have filed a class-action lawsuit claiming leadership misrepresented FX-322 in earnings calls, press releases, SEC filings and presentations before March 23, 2021.

At this point, company leadership argues that this study was tainted by bias — because patients may have underreported their own hearing ability to gain access to the trial, said LeBel (and the study didn’t adequately control for that possibility).

“As patients were coming in to the study, there were inconsistencies between their historical speech perception scores and the scores that they were coming into at the baseline visit of the study,” LeBel told TechCrunch.

Jason Glashow, Frequency’s senior vice president of corporate affairs, clarified that the company sees this as a “design issue” with the trial.

“While there is bias in the study it’s not the fault of people who participated,” he told TechCrunch.

During the R&D day, Frequency reported pooled data from three of the Phase I studies to make the case that FX-322 was showing a pattern of response, and that the Phase 2 study was an outlier. 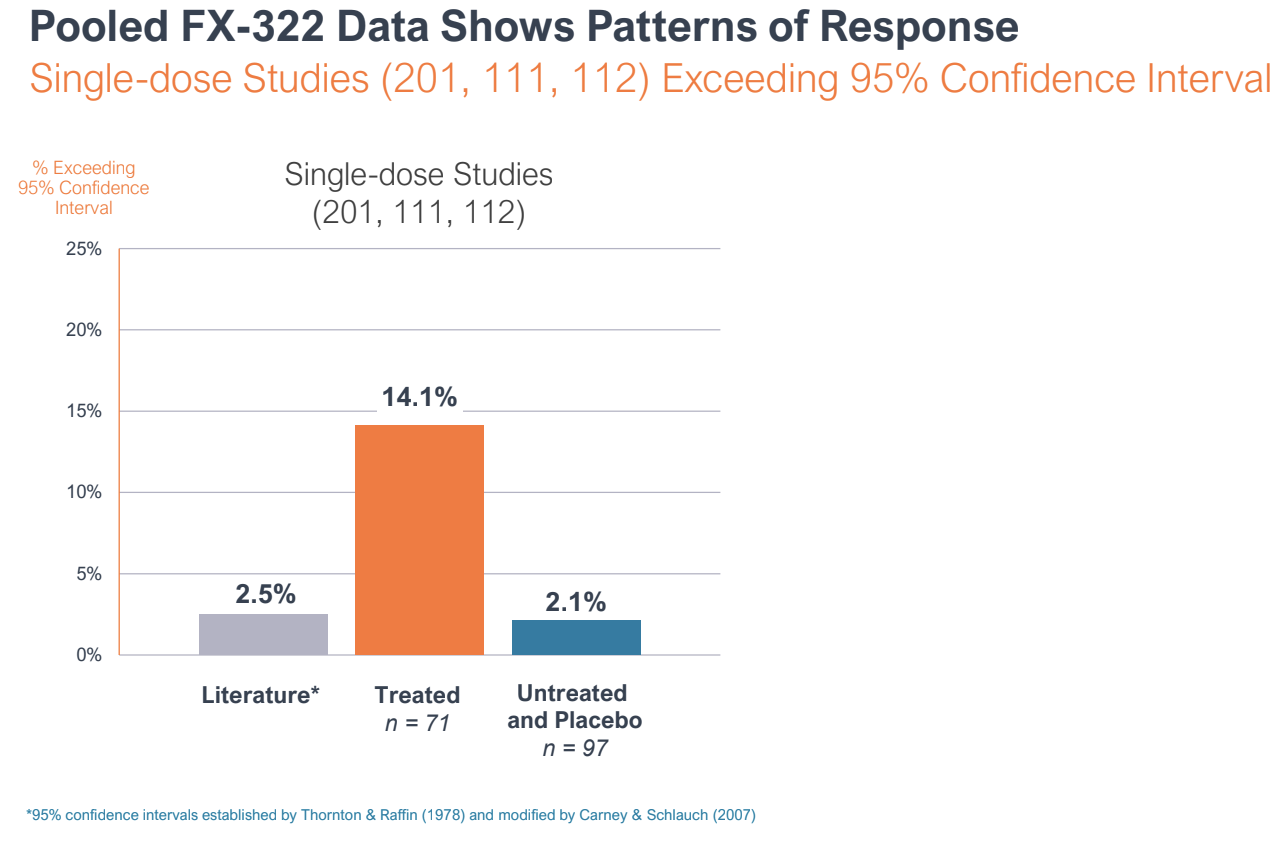 It’s unclear how this news may or may not impact the ongoing legal proceedings. But the experience has informed the construction of future studies on the FX-322 drug.

Frequency has already announced the beginning of a new Phase 2b clinical trial on FX-322. This study on 124 participants included a one-month “lead in” section to monitor participants’ hearing before baseline hearing is measured. The first patient was dosed in October 2021.

Aside from FX-322, Frequency is, for the first time, looking to bet on more than just one product to establish itself. The company also has plans to test a new product, called FX-345, a more potent version of the small molecule in FX-322. That potency, said Loose, gives this product the ability to penetrate deeper into the cochlea.

The company will be pursuing an Investigational New Drug Application IND (IND) in Q2 of next year.

Frequency is also in the process of developing a multiple sclerosis drug called FREQ-162 — another step toward one of the company’s earlier articulated goals: to focus more broadly on regenerative medicine.

According to a presentation viewed by TechCrunch, the company does have preliminary data from mouse studies suggesting the drug has been able to help drive oligodendrocyte production. Those cells produce the fatty sheath that is degraded in patients with multiple sclerosis.

However, the company wouldn’t disclose a timeline for upcoming studies.

For now, the focus remains on FX-322, and on the newly designed trials that can provide answers to some outstanding questions.