Citcon, a mobile wallet payment provider, has closed on $30 million in funding in a Series C round co-led by Norwest Venture Partners and Cota Capital.

Citcon’s mission is straightforward: to allow merchants to accept payments by mobile wallet and alternative currencies “with the same ease as they process traditional credit card payments today,” according to CEO and founder Chuck Huang.

Before starting Citcon, Huang spent four years as a lead systems architect at Visa, where he led the system architecture design and development for several products, including its mobile payment gateway and card-based rewards redemption platform.

Citcon was built on the premise that mobile payments provide a “more user-friendly, secure and safer” contactless shopping and payment experience for both consumers and merchants. And that was before the COVID-19 pandemic accelerated the surge in contactless payments.

Clearly, Citcon is doing something right. As 2021 draws to a close, Citcon’s annualized payment volume is about $1 billion, representing over 300% year-over-year growth. Revenue, too, has grown by the same percentage, according to Huang.

The startup’s payment technology is integrated with POS and e-commerce systems such as Toshiba, Oracle, Cegid, Shopify and SAP. And it’s deployed at more than 30,000 merchants’ sites and locations, including L’Oréal, Tumi, Texas Instruments, Macy’s and Panda Express.

Citcon offers something that Apple Pay and Google Pay don’t, according to Huang.

“Ours is software-based and so unlike with Apple Pay or Google Pay, you don’t need a bank or credit card attached to the wallets,” he explained. “We have a unified API for both mobile and alternative payment methods (APMs).”

Traditional payment infrastructure was not designed to accept mobile wallets so merchants had to deal with a lot of implementation, Huang said. Since Citcon does a single API integration for a merchant, it allows that merchant to accept over 100 mobile wallets around the world. 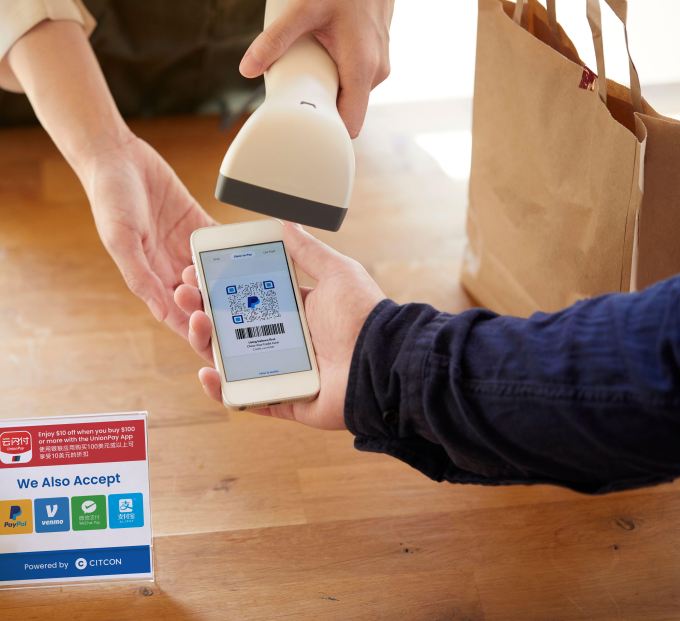 The trend of software-based wallets for payments has accelerated globally over the last couple of years, according to Huang. And Citcon is poised to capitalize on that trend.

“China is an almost cashless society and its residents use this kind of wallet extensively, but it is gaining momentum all over,” Huang told TechCrunch. For example, in the U.S. the startup is working with PayPal/Venmo to enable this software wallet for its users. It has also partnered with Klarna to create a “buy now, pay later” wallet.

Looking ahead, Citcon plans to use its new capital to add to its current headcount of 100, and expand globally. It already has offices in the U.S., Canada, Europe and Asia. It’s eyeing “rapid” overseas expansion with a particular focus on Latin America and the Asia-Pacific market.

Norwest Venture Partners’ partner Priti Youssef Choksi said her firm was first drawn to Citcon’s leadership team. She described Huang and president and COO Wei Jang as “thought leaders” in the world of payments. The pair, she noted, are both natives of China and can bring an international view into how mobile wallets can evolve within the U.S.

“This is important because there are several key themes converging around mobile payments both in the U.S. and abroad,” she wrote via email. For one, mobile wallets have eclipsed credit cards to become the most widely used form of payment globally, with active mobile wallets expected to grow from 2.8 billion in 2020 to 4.8 billion in 2025.

“In the U.S., they’re quickly gaining share given new wallets (such as crypto, buy now, pay later platforms and neobank wallets) are increasingly popular among younger consumers, and as the pandemic has pushed consumers/merchants towards contactless payments,” Choksi added.

She is also impressed by the company’s ability to have navigated compliance challenges surrounding each wallet and country in which it operates.

“This is particularly important given the regulatory scrutiny on payment flows in the U.S. and around the world,” Choksi said.

Cota Capital partner Ben Malka said his firm has been closely following trends in alternative tender-type usage, both globally and in the U.S.

“While we believe we are still in the early innings, there is a tremendous market opportunity to enable different payment types,” he said. “We were impressed with Chuck and his team. They have deep experience in the payment industry and the right acumen to build a global payments company.”