While cruising along Interstate 8 in the Lucid Air, it didn’t take long for the conversation to turn to spider graphs. Spider graphs offer a quick glimpse of how various factors like power, performance, weight and aerodynamics interact with one another.

For the engineer sitting in the passenger seat, spider graphs are top of mind.

Balancing the weight of battery packs with power and braking is a delicate science that when tipped too far in any one direction causes total chaos for the consumer. Add in design constraints as well as federal and legal guidelines and the bar to creating a successful brand-new vehicle from scratch seems to be an almost impossible task.

The Lucid Air, a luxury electric vehicle that ranges between $77,400 and $169,000 depending on the variant, has some well-honed spider graphs.

While the Air hasn’t completely knocked it out of the park on the first go, thanks to a team of automotive veterans, advanced technology and that spider graph sweet spot, the new Lucid Air offers a blend of tremendous range, luxurious fit and finish, and enough technology to keep even the most discerning customers happy.

The drive: Rocket ship with a view 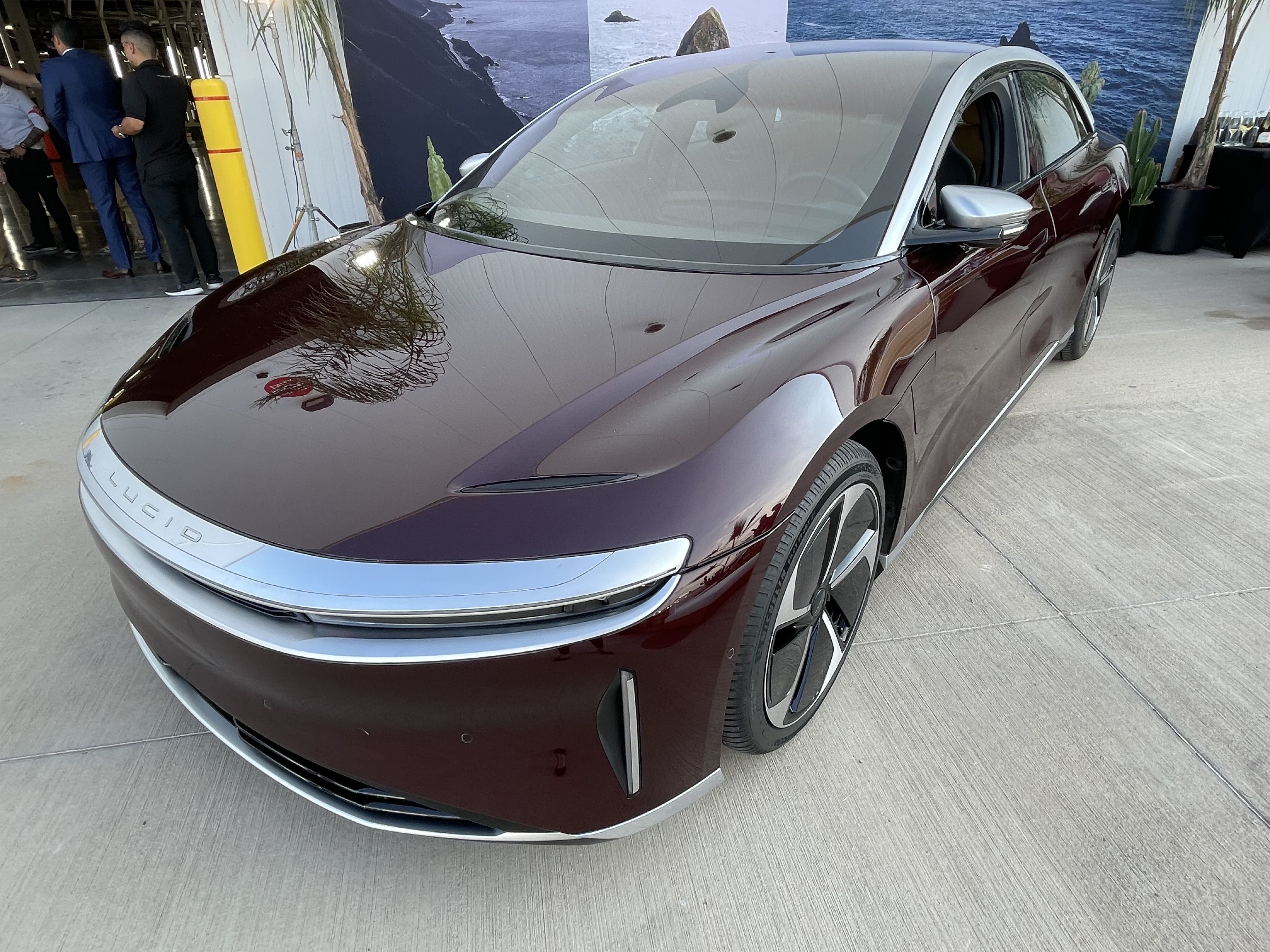 While waiting in line for a 13-minute stint behind the wheel of one of a dozen Lucid Air Dream R vehicles fresh off the production line, I’m handed a planogram pamphlet, with the words “Lucid Quick Starter” emblazoned across the front.

Think of it like a supermarket map that helps you figure out where the windshield wipers are and how to adjust the steering wheel. Customers and journalists alike mill ahead after completing a nearly three-hour tour through the battery and assembly plant in Casa Grande, Arizona, and it’s clear that what we’re about to test drive needs a little bit of demystifying.

The Lucid Air Dream R cars we’re driving and riding in are full-size sedans with five seats and interior space that rivals some midsize SUVs. Dream is the name Lucid has bestowed on the first editions of the Air that they are rolling off the line. The Air is the first production vehicle that Lucid Motors has created and it comes in two versions, Range (R) and Performance (or P). The main difference between the two is obvious by their names: Range gives you up to 520 EPA-estimated miles, while Performance gives you 1,111 horsepower and can do naught to 60 in under 2.5 seconds.

There are almost no physical buttons in the cabin outside of those used for some basic temperature and fan controls for the driver and passenger and audio controls, plus a few small buttons on the steering wheel to control things like the ADAS system. Everything else is set using the main screen in the center console — a screen Lucid has dubbed the “Pilot Panel.” It’s a large curved screen that can be stowed into the dash to reveal a small storage cubby, and it serves as the central control system for the Lucid Air. 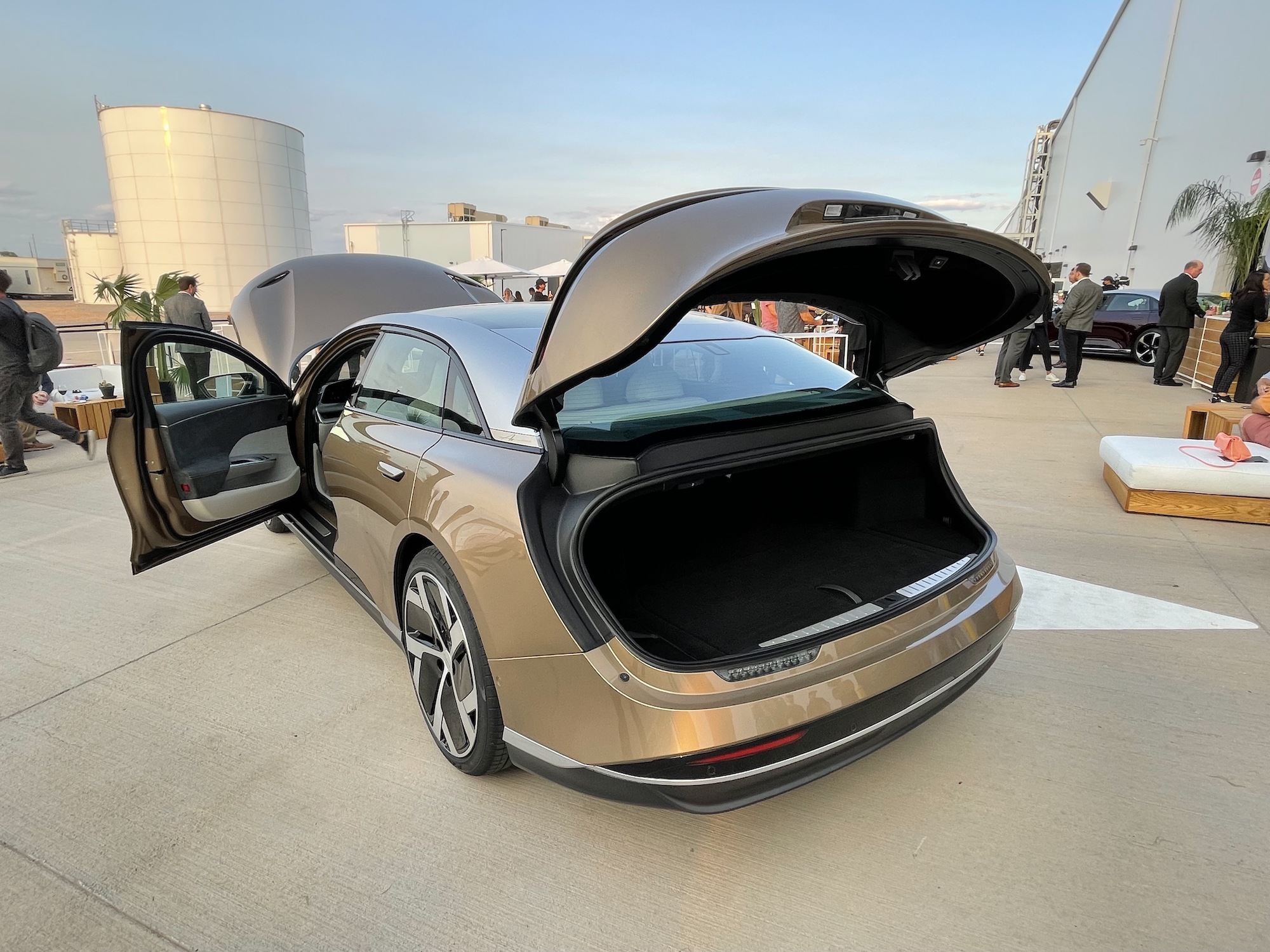 Climb in and set your seat settings the way you do in any other luxury car using toggles on the seat, but that’s where the comparison to other gasoline-powered vehicles ends. Want to change where the steering wheel is? Like a Tesla, there’s no button, joystick or lever on the column. You’ll need to do that on the Pilot Panel. How about adjusting the mirrors? Another few swipes and taps on the center screen and you’re there.

Once situated, use the stalk on the right side of the steering wheel to move into drive and if you have brake hold on, you’ll need to give the accelerator a small nudge to get the car rolling forward. The turning radius is relatively big since this is a full-size luxury sedan so it’s safe to expect to see plenty of owners practicing the art of three-point turns in tight parking lots.

The accelerator isn’t touchy in the comfort mode, which Lucid calls Smooth. In fact, it’s well balanced and feelsome, a lot like any ICE-engined vehicle out there today. Acceleration is linear, so you won’t suddenly find yourself launching to blistering speeds without consciously putting your foot in it. On sun-scorched, cracked and uneven roads the Air R rides smoothly and comfortably — maybe even a little numb in the Smooth mode.

If you want to feel a bit more connected, put the car into Swift mode using the Pilot panel, and the five-link suspension and semi-active dampers change, as does the throttle map. The ride stiffens ever so slightly, though you don’t have to worry about jostling your passengers. This is no sports car, but it’s no longer pillowy soft. Esther Unti, the senior vehicle dynamics engineer who is shepherding one of the two 13-minute drives we did said that if you drive the car in Swift or the even more sporty Sprint mode, which we weren’t permitted to try, you do (for obvious reasons) lose around 10 miles of total range.

There are two regenerative brake modes you can use in the Lucid Air: standard and high. Hold down the Swift mode button on the Pilot panel and you can bring up the settings for braking. In high mode, the Air drives like any electric vehicle in B-mode or braking mode. Take your foot off the accelerator and the car slows and sends a little bit of power back into the 113 kWh battery pack. (That pack is bigger than anything coming out of Tesla, by the way.) Like most braking modes, it takes a bit of getting used to, to modulate and not jostle your occupants, but it’s not tuned to be overly aggressive. In standard mode, the Lucid Air coasts the same way a heavy gasoline-powered vehicle does.

In front of the driver is a massive yet somehow not overwhelming 34-inch curved 5K screen that serves as the cockpit. It is surprisingly minimalist with its information. Use the buttons on the steering wheel to set the ADAS system, which Lucid calls “DreamDrive,” and the adaptive cruise system deploys its 14 cameras, six radar sensors, one lidar and one ultrasonic sensor. From what I could tell in the three-minute highway stint I did with it on, the ADAS system seems to be relatively well sorted. You can choose Highway drive — which uses lane-keeping assistance to keep you relatively centered in the lane, though the vehicle did ping-pong a little off the lines in wider lanes — or standard cruise control, which turns off the lane-keeping assistant and manages speed only.

While we weren’t able to try any of the navigation systems because they were disabled, Lucid says that you can put a destination in on the upper cockpit screen to the right of the steering wheel and then swipe the map down into the Pilot panel to display a large map.

The interior: All that space

The Lucid Air is designed around space, and inside, there’s plenty. There’s more than enough legroom in the back seat (more than 35-inches in the R version I rode in), and the giant dual-pane infrared-blocking glass roof makes it feel very lounge-like from the back seat. It’s like being in a convertible without having to worry about sunburn, ruining your new ‘do or losing your hat.

All that glass does make the interior of the car a bit boomy even on relatively smooth stretches of road. Boomy enough that on two separate 13-minute loops, I had to lean forward to hear the conversation happening in the front seat.

The interior is a balance of modern and minimalist. Muted colors and cloth and leather materials encourage the same airy and open feel, yet there are a few things inside the Air that feel a little bit less than premium. For one: The interior door handles. Lucid has rethought the typical pull and placed it inside the armrest as a small plastic-feeling lever that you easily pull toward the rear of the car to open. In both models it felt light and somewhat rough against my fingertips — almost like a 3D-printed part that was an afterthought.

It’s the same with the steering wheel controls for the ADAS system. To control the system you use a pair of silver buttons directly on the spokes of the wheel. Press once for highway mode or hold for cruise control only. A small thumb wheel under the button you use to engage cruise allows you to speed up or down when using the cruise control or ADAS. That wheel lacks a notchy heft that you’d expect from a luxury car and it too feels like a light, 3D-printed part.

All in all, these are tiny things that don’t detract from the overall luxurious and solid fit and finish of the Lucid Air. Body panels are tight and flush, with even gaps all around, and there’s a clear sense of what Lucid thinks is going to be the future of the luxury sedan.