Blue Origin successfully completed its first crewed launch Tuesday, sending four human passengers to space – including the company’s founder, Jeff Bezos. The result of billions of dollars of investment, dozens of test launches and some petty squabbling amongst ultra-rich founders, the triumph of the New Shepard, along with that of Virgin Galactic earlier this month, undoubtably heralds the dawn of a new age of space tourism.

It was quite the media spectacle. The mission took place at Launch Site One, Blue Origin’s sprawling and secretive facility that sits around thirty miles north of the small town of Van Horn, Texas. Every hotel in Van Horn and nearby towns were sold out of rooms in the days leading to launch as spectators traveled in for the event; meanwhile, a huge gaggle of local, national and online outlets (including yours truly) swarmed the Press Site as early as 2:30 AM CST. Despite some premature calls for rain in the early hours of the morning, the skies stayed clear and things mostly kept to schedule.

The four-person crew – including Bezos, his brother, Mark, 18-year old student Oliver Daemen, and aviation pioneer and Mercury 13 veteran Wally Funk – emerged from the training center and caught a Rivian R1S electric SUV to the launch pad around 45 minutes prior to launch. (Bezos drove a Rivian R1T pickup to the landing site of the rocket after its last test, a nod to Amazon’s sizeable investment in the EV startup). The crew climbed the launch tower and took a brief respite in an adjacent shelter, before climbing into the capsule, dubbed RSS First Step.

There was a brief hold at T-15 minutes, leading to the launch running slightly behind schedule. New Shepard took off at 8:11 CST. They passed the Kármán line (more on that later) at 8:15 AM; capsule separation followed, and the booster returned to the launch site autonomously and with a loud boom at 8:19 AM. The crewed capsule floated slowly to Earth via parachute, touching land at 8:22 AM for an eleven-minutes total flight time. 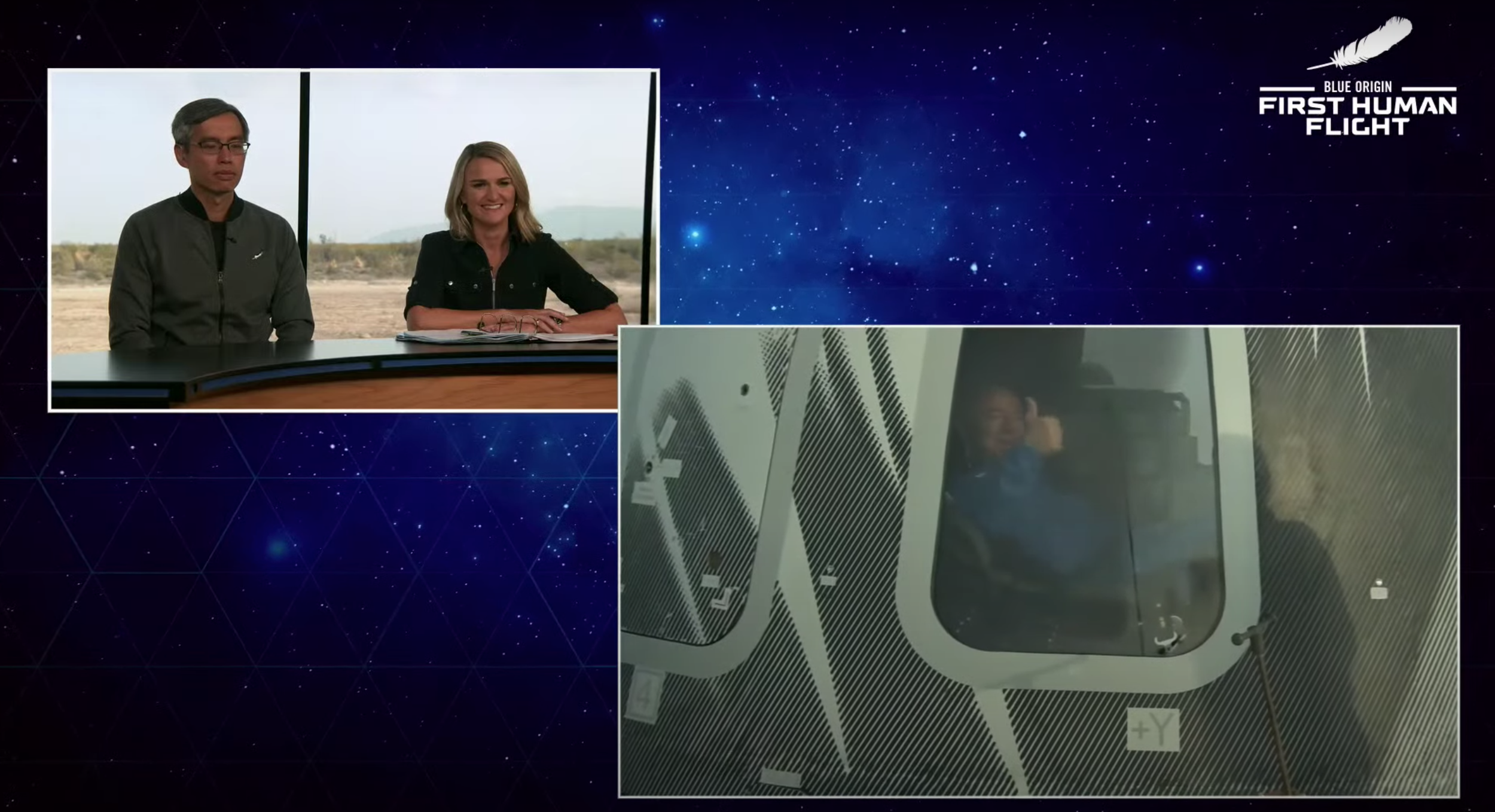 The flight was the result of fifteen tests of the reusable suborbital New Shepard rocket, including a rehearsal launch in April with a dry run of flight preparations and a mock crew embarking into the capsule, then disembarking before take-off. Blue Origin now joins rival Virgin Galactic in a very, very small group of commercial space companies to send private citizens to orbit.

Daemen was added to the crew after the anonymous auction winner, who bid $28 million for the seat, had to bow out due to a scheduling conflict. CNBC reported that Daemen’s father, CEO of the Dutch private equity firm Somerset Capital Partners, placed the second-highest bid. Daemen is the youngest person ever to go to space at 18, and Funk is the oldest ever at 82.

The route to space

Bezos founded Blue Origin in 2000, six years after he started ecommerce behemoth Amazon. The company has zeroed in on space tourism, and it sees this flight as the requisite proof of concept it needs to start flying customers. To that end, the New Shepard capsule has large, tourism-friendly windows – the largest in spaceflight history, according to the company. “These windows make up a third of the capsule, immersing you in the vastness of space and life-changing views of our blue planet,” it says on the Blue Origin website.

The launch is also the culmination of weeks of squabbling between Bezos and his billionaire spacefaring rival, Richard Branson, who was aboard his own flight to space 10 days earlier. But despite ostensibly beating Bezos to the punch, much of the fighting was over what actually counts as space – and whether VSS Unity, Virgin Galactic’s rocket-powered spaceplane, actually went there.

The kerfuffle is over what’s known as the Kármán line, a generally recognized but not strictly defined imaginary boundary of space that begins where the atmosphere becomes to thin to fly in by ordinary means. VSS Unity flew to around 51.4 miles – above the boundary recognized by NASA and the U.S. Air Force, but other authorities put the line closer to 60 miles. “From the beginning, New Shepard was designed to fly above the Kármán line so none of our astronauts have an asterisk next to their name,” Blue Origin tweeted two days before the Virgin launch. The tweet also included a little infographic throwing further shade at on Virgin flights.

From the beginning, New Shepard was designed to fly above the Kármán line so none of our astronauts have an asterisk next to their name. For 96% of the world’s population, space begins 100 km up at the internationally recognized Kármán line. pic.twitter.com/QRoufBIrUJ

This is just the beginning for Blue Origin. Director of astronaut sales Ariane Cornell said at a pre-mission briefing on July 18 that she’s been “chatting with many of [Blue Origin’s] future customers who have signed for the subsequent flights.” She added that the company intends on launching two more flights this year, with CEO Bob Smith estimating that a second crewed New Shepard flight could take place in September or October.

What does this mean for the rest of us (as in, those that don’t have a couple extra million floating around in our bank accounts)? While the so-called billionaire space race is a petty squabble, both Blue Origin and Virgin Galactic’s respective launches are the likely heralds of a new age of space travel for consumers and scientists alike. It will be limited to the wealthy at first, but as TechCrunch’s Alex Wilhelm argues, costs will go down and more humans will go to space – including scientists and researchers, maybe even me or you.

In case you missed it, you can catch the entire launch on Blue Origin’s archived livestream here: