Knowledge workers — those whose professions tend to be anchored to desks or computers — have long been the most obvious and primary focus for a lot of B2B apps and services. But as the wider world migrates to doing more and more on smartphones and other connected devices, the opportunity to build for the rest of the global workforce continues to grow. Today, one of the startups targeting smaller businesses in the area of field service is announcing a round of funding that underscores that trend.

Workiz, which has developed a platform to help small business in the home services space — locksmiths, removals companies, large appliance repairs and others — book jobs, manage teams, keep in communication with customers, bill them and also — taking a page from the world of knowledge workers — run data analytics connected to their jobs to optimize business more in the future, has closed a funding round of $13 million.

The funding round was oversubscribed — it actually grew to $13 million in the week between getting pitched this story and writing it — and it comes on the back of a year that has seen double-digit growth exceeding what the startup had expected to achieve in 2020, said CEO Adi (Didi) Azaria in an interview.

Part of the reason has been an uplift from people spending more time working at home, putting their dwellings and the things contained in them through more wear and tear, and/or realizing that they could do some home improvement and vastly upgrade their daily environments.

“If you open the fridge too many times, things get broken and you need these guys to come in,” he said, adding that the demand from customers these days are for people to be using the same tools they are to get work done. “Many field services need software because our expectations as consumers are changing. They see it as a need.”

Workiz’s CEO himself was once a locksmith, similar to co-founders Idan Kadosh and Erez Marom (who co-founded the startup with Saar Kohanovitch), but he might be better known for co-founding his previous startup, Sisense, the business analytics company now valued at over $1 billion.

Workiz is based out of San Diego and Israel, with the latter home to its R&D efforts and a number of its investors. This Series B is being led by Tel Aviv’s New Era Capital Partners, with past backers Aleph, Magenta Venture Partners (which led its Series A), Maor Investments and TMT Investments also participating in the round.

Valuation is not being disclosed but there are some signs that it’s on the up for the startup. Workiz’s services — the startup’s name incidentally is pronounced not like a cute version of work, “workies”, but like “work is” as the company’s official name is actually Workiz Easy — are live in the U.S. and Canada, and it currently has some 100,000 service professionals using the platform.

Since the startup was founded in 2015 (originally as Send a Job), more than 12 million jobs, 100 million text messages and $5 billion in job revenue have been initiated through it.

For a point of comparison, a direct competitor, Jobber, earlier this year closed a $60 million round also after hitting 100,000 service professionals on its platform.

Despite that competition — and it’s a crowded field, with others like ServiceTitan, GE’s ServiceMax, BigChange in the U.K., new approaches like Super and many others in the market — field service remains a big market, with some 20 million businesses globally focused on home services, with 5 million in the U.S. alone.

The opportunity for a startup like Workiz within that is to figure out what needs are currently not being addressed as well by existing offerings, and building them into its own solution.

One example of that, Azaria points out, has been the company’s voice service. He notes that most field service professionals before the rise of mobile apps had organized and updated customers and head offices of their whereabouts and progress through phone calls.

In some cases that is not hugely efficient, since it only alerts the person you are calling, not a whole team, and sometimes the person you are speaking with is not the person who needs the update most. But, it also remains a key way to connect with customers especially when there are delays. The phone service that the company offers integrates with other details about a job, letting the call become part of the bigger work log for everyone else to see.

Another is scheduling, which has been a complicated issue to manage especially in cases when you have small teams of users who need to work in close conjunction with each other. Workiz’s scheduling tools essentially work like a shared Google Calendar to help match people with skills, locations and jobs to get work booked and done faster. 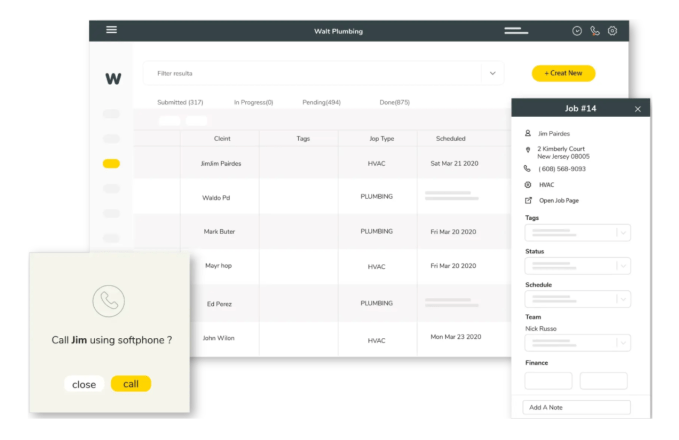 The company’s toolkit, interestingly, has features that highlight business analytics too: you can currently manage call tracking, lead tracking and a live dashboard to measure how long jobs are taking and whether scheduling is mapping accurately or not. These are next-level tools that remind me a little of Sisense and point precisely to how software and goals envisioned for the average data/knowledge worker are now being recast for those on their feet and in the field.

This also leaves the door open for the option to build in more lead generation into the platform, essentially creating a marketplace for field service professionals to connect with customers seeking people to do specific jobs, although it’s not an area the company is exploring for now at least.

“At this point we focus on SaaS and making a best-of-breed solution. We’re not in the lead generation market. We try to focus because we understand how challenging it is to be a field service engineer, with phone calls, stress and disorganization,” he said. “Most of them still use pen and paper and need tools to organise the day. Many of them can advertise or use third party companies for lead generation, although maybe in the future we might do more on that.” For now, he said, the focus will remain on tools to address their more immediate needs just to get through their workdays and helping them be more professional, to “make the service person look larger than what they are.”

“Field service management is a market ripe for disruption, with a technological approach that is both agile and competitive,” said Gideon Argov, managing partner at New Era Capital Partners, in a statement. “In Workiz, we found all the elements for success, coupled with passionate leadership that started from the field. We are delighted to join the Workiz team.” Argov is joining the board with this round.