There’s nothing small about the latest Mac mini.

Never mind the Mac mini’s tiny size or low price. This diminutive desktop is a revolution for most users, thanks to Apple’s new chipset. Called the M1, this chip platform replaces the Intel CPU long found at the heart of Apple’s desktop and portable computers, and the results are impressive.

Using the M1 Mac mini feels like using a new iPad or iPhone. Everything satisfyingly snaps into place. I keep waiting for my test machine to start lagging, and nearly a week later, it’s just as fast as the day I started using it. The new Mac mini is surprising, and most users will find it a major upgrade over existing Mac computers. It’s hard to beat regardless of the price.

For casual users, those who live in a web browser or Apple’s apps, the Mac mini is a no-brainer option. This is the desktop I would buy for myself. Even for power users, those who run bespoke applications, the Mac mini should be seriously considered. Most mainstream applications excel on the new Mini — especially apps with a creative tilt toward photography or video.

The Mac mini has long been a forgotten friend among the Mac lineup. Hardly updated and never promoted, it sat on the bench for years, watching as Apple’s portables received updates and refreshes as the world became more mobile. But here we are in the midst of a never-ending pandemic. With coffee shops closed and business travel limited, the COVID-19 crisis could lead to the rediscovery of the desktop computer.

The M1-powered Mac mini is a winner.

There are several things you should know. One, the new Mac mini runs the M1 SoC, which is fundamentally different from its Intel predecessor. Instead of a CPU, it’s an SoC — System on a Chip, which comes with advantages and concessions. The chipset is built around an ARM design with more integrated components than its CPU counterparts. In many ways, it’s more similar to the system powering phones and tablets than the chips used in traditional computers. Because of this design, components that used to be discrete are now integrated directly into the chip.

Second, Apple provided a 6K 32-inch Pro Display XDR with my test Mac mini (these will be returned to Apple). I’m also running a 24-inch display over HDMI. According to the Mac mini’s product page, the system is limited to two monitors. I was able to hook up a third monitor through 3rd party software but it was unstable and should not be considered a capability.

Lastly, you should know TechCrunch also reviewed the new 13-inch MacBook Air and 13-inch MacBook Pro. We benchmarked these systems with similar conditions to demonstrate the differences between the units.

In our tests, we found Apple’s M1 system on a chip (SoC) to outperform its rivals, regardless of price. With the M1 at its core, the Mac mini is faster in most regards than every Apple computer available except for the ultra-expensive Mac Pro — and sometimes the Mini is faster than the Mac Pro, too. What’s more, this performance increase is noticeable throughout the system and not just limited to raw computing tasks in purpose-built applications. The system is snappy, responsive and feels like the start of a new era of computing.

Snappy hardly describes the experience of the new Mac mini. This system flies. Users will instantly notice the increase in speed, too, from startup time to launching apps. In the past, even on powerful machines, macOS has always felt heavy compared to iOS, but not anymore. With the M1 chip, macOS (Big Sur) is light and free and a joy to use.

Even better, the ARM-based M1 chip allows Macs to run iOS applications, and they run as smoothly on the Mac as they do on an iPad.

There’s likely a hesitation around embracing a new Intel-less Mac. Will your legacy applications run on these machines? Will they run well? I can’t answer every variable. I installed and ran dozens of applications during my few days with the system and never experienced a roadblock. Even with older programs, everything ran as advertised, and in most cases, ran better on this M1-powered Mac mini than on my few-months-old 15-inch MacBook Pro. I didn’t find one application unable to run on the new platform.

The largest speed increases are most noticeable when using native apps for the M1 processor. With Apple’s Final Cut Pro, the application loads seemingly instantly — two seconds from button press to it being open and ready to go.

With the M1 chip, it’s less painful to edit 8K footage in the native Final Cut Pro app than it was to edit 4K footage on an Intel Mac. Exporting the files still takes time, though, and this is one of the few tasks where Intel’s platform outperforms the M1.

Even when using legacy software, the system preformed with ease. Edits in Photoshop seemed more fluid. Lightroom loaded photo albums quicker and without hesitation. Editing video in Premiere was easier and less painful as I scrubbed through 6K footage. Even unzipping files was much quicker.

This is a silly demonstration, but watch the GIF above. Applications open instantly — all of them at the same time. If Apple put a beachball in this system, I haven’t found it yet. 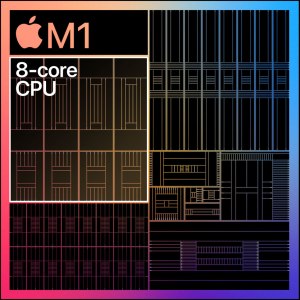 The M1 chip is based on an ARM design, which required Apple to rework macOS to run on this new computing platform. While it looks mostly the same, the macOS is now purpose-built for Apple’s own silicon. To take full advantage of the redesigned chip, applications need to be re-coded into an Arm-friendly design. And yet, we found something surprising: Even the apps that are not re-coded yet are still impressively fast thanks to Apple’s Rosetta 2 that enables software encoded for Intel’s platform to run on the new Apple platform and take advantage of the M1’s power.

For most uses, this holistic approach of building the hardware and software results in major advantages. Common system-level tasks like launching apps, waking from sleep and unzipping files are lightning-fast. Other items like rendering video and editing photos are just as fast, too. Right now, at launch, all of Apple’s apps — from Music to Photos to Safari — are re-encoded for the M1. Like those from Adobe, other apps are not yet native, but the older versions run fine, and in most cases, run better on the M1 than an Intel platform.

The M1 platform lacks a dedicated graphics processing unit. It’s built-into the core of the chip. Thanks to a memory dedicated to machine learning, this lack of a discrete GPU is hardly noticeable for professional users. Still, those who do intensive graphics work (like professional gfx visual artists) should hesitate. Even then, this conclusion could change once the applications become native to the new ARM architecture.

The M1 also lacks the ability to use an eGPU — an external graphics card — but most users should not fret. It could be a problem for pros who found the Intel-based Mac minis paired with a powerful eGPUs as a viable, low-cost alternative to the Mac Pro. However, based on our testing, the GPU performance in these M1 systems are impressive and could be good enough for most, even in creative media editing applications.

In addition to common workflows, I ran through some industry benchmarks to see how the system responds and came away impressed. We took it one step further, too, and charted the performance between Apple’s top-of-the-line systems and the new 13-inch MacBook Air and 13-inch MacBook Pro.

Benchmarks often oversimplify results, but in this case, they seem necessary. This puts systems on common ground. By looking at multiple tests, the results draw a common conclusion. The M1 is really good.

In our testing, all three machines performed similarly. The Air started to fall short in the longer tests, and that’s likely due to its passive cooling that does not feature a fan. In the MacBook Pro and Mini, the SoC is cooled by a fan, while a heatsink is used in the Air.

What does this mean for you? For most users, the Air’s performance is sufficient as it only slows down during long, intensive tasks. For browsing the web, editing photos and watching videos, the Air is perfect.

There’s one downside to the new Mac mini over its Intel sibling. The M1 Mac mini only sports two Thunderbolt 3 inputs. For some users, this could be a deal-breaker, though it’s not for me. There are countless ways to expand the Thunderbolt capability of the Mac mini, and to me, the performance of the machine outweighs the port limitation.

The M1 Mac mini also lacks a 10GB Ethernet option, limiting its use as a server for some users. This is also likely an M1 limitation, and something I would expect would be addressed in future chipset revisions.

Multiple monitor support is a major downside to the M1 Mac mini. It only supports two monitors: one through Thunderbolt and one over HDMI. I was able to get a third monitor running at low resolution through third-party software, but it was unstable and performed poorly. To some, including me, multiple monitor support is a major issue and two monitors are often not enough.

Apple, when promoting the M1-powered computers, laid out some wild claims about the chipset. We found most of the claims to be factual. We ran a handful of benchmarks on the M1 systems, comparing them against the most recent Macs, including the Mac Pro.

Benchmarks paint with a broad stroke and often miss nuances. That’s the case here. While the first few benchmarks demonstrate the speed of the M1, the final test fails to capture a critical aspect of Final Cut Pro. Sure, it’s slower to export than an Intel-based system, but using the M1-native version of Final Cut Pro is much smoother than what’s available on older systems. I was able to easily manipulate, scrub and edit 8K footage without even a hiccup. Rendering takes longer, but editing is seemingly easier. 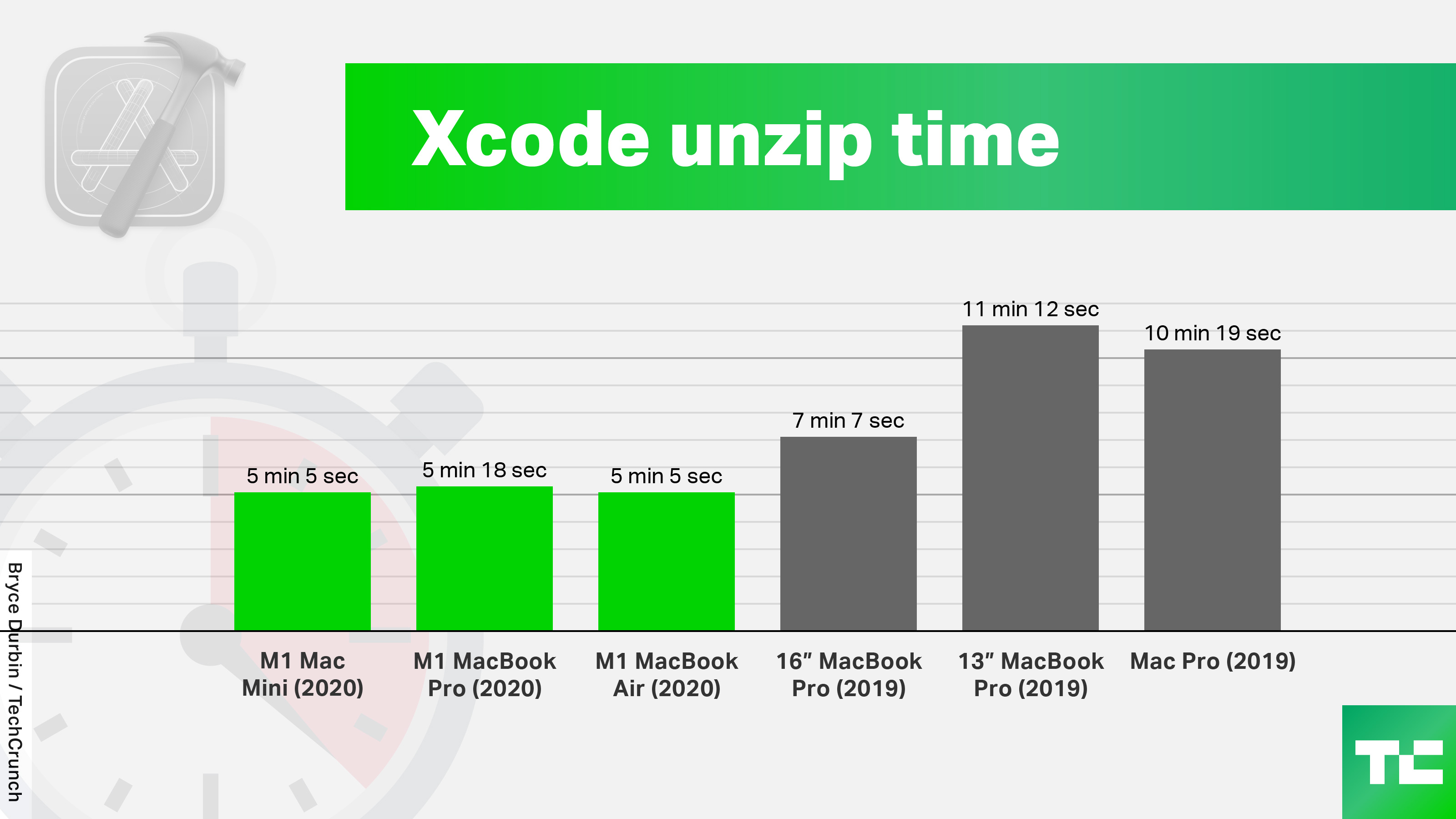 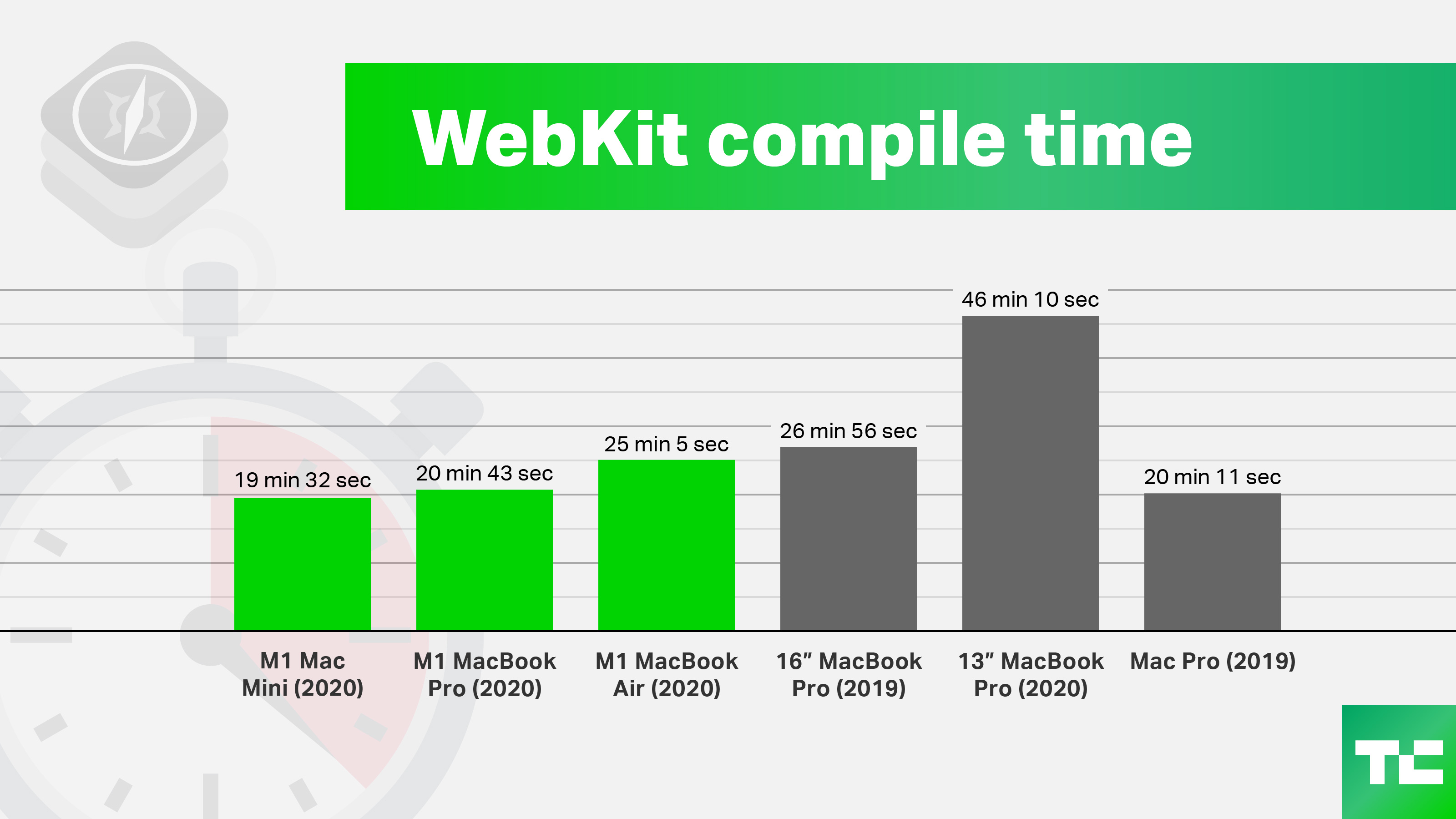 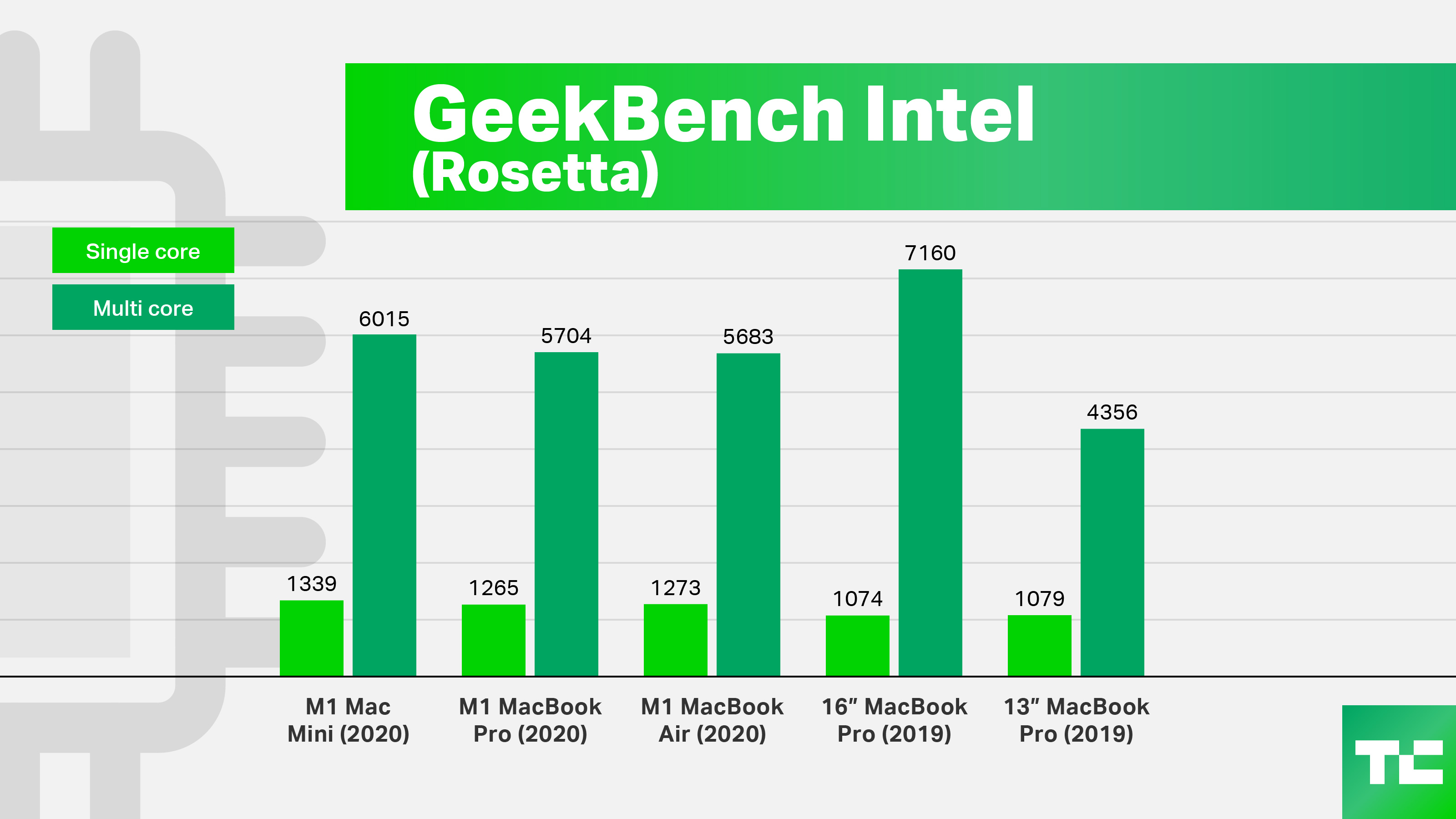 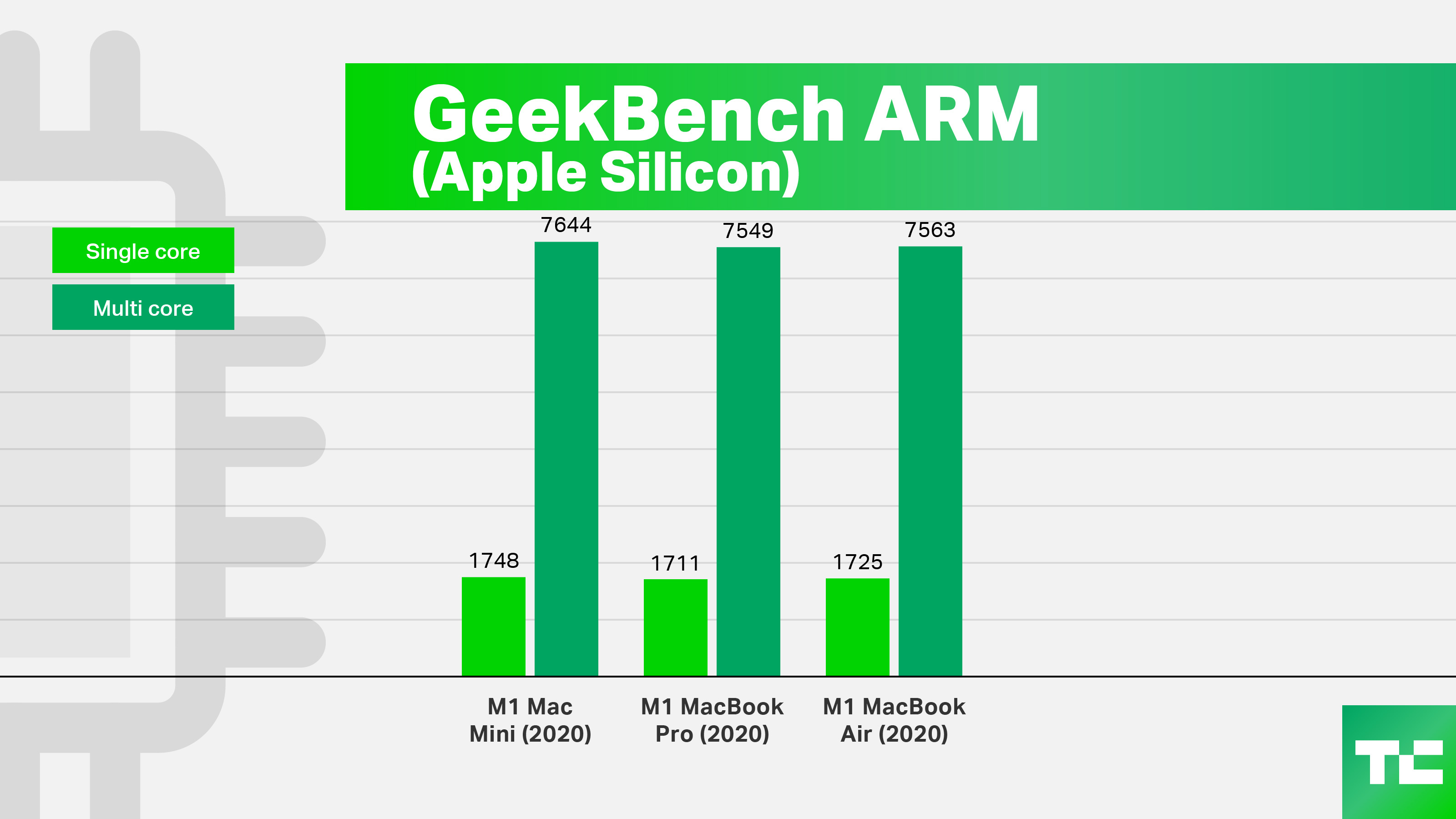 With Geekbench, we ran two tests: One, using Rosetta 2 to demonstrate the system’s power when running legacy applications. Then we ran Geekbench in an M1 native mode to test Apple’s silicon. Higher is better. 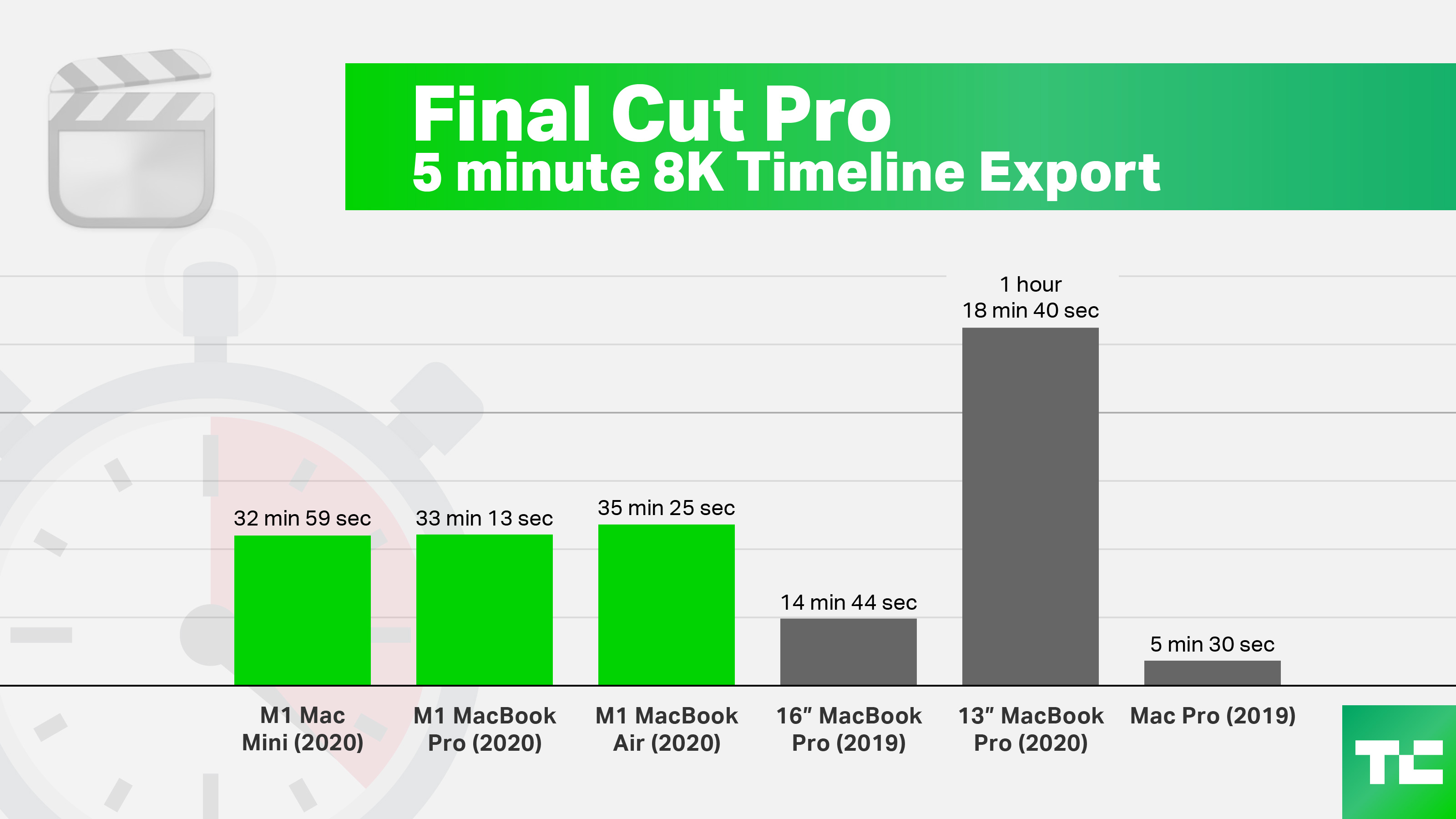 For Final Cut Pro, we timed the rendering of an 8K video (80GB). Lower is better.

The new Mac mini is a fantastic machine and feels like the start of a quiet revival. In another era, Apple was known for its solid, fairly-priced desktops, which is a great description for this Mac mini.

As a longtime fan of the Mac mini, I’m thrilled to see it once again as a great option for those of us who live at a desk .

With the M1 chipset, Apple is moving onto a new chapter in its long history of personal computers. This chip redefines the computing paradigm by offering stellar performance in a small, power-efficient package. In the Mac mini, the M1 shines as a stable workhorse that provides a new experience to Mac desktops. In the new MacBook Air and MacBook Pro, the M1 is just as solid while offering substantially better battery life than previous offerings. Read those reviews here and here.