TikTok announced this morning it will expand the set of resources provided in its in-app election guide in the U.S. to include direct access to sites that help users get information about polling locations and hours, those that help people having voting difficulties and those offering other details how the voting process works, and more. TikTok also said it’s working with the Associated Press (AP) to provide access to an interactive map showing live results for both federal and state elections, as well as ballot initiatives, in the updated guide.

This map will be updated with live results starting on Election Day, so TikTok users can check it at any time from within the app to get the most current information.

In addition to the AP, the expanded election guide will include FAQs from the National Association of Secretaries of State about the voting process itself. This section helps to explain details that may be new to TikTok’s younger user base — many of whom voted for the first time in this election. This information, which is summarized in the app, includes how election results are compiled and what to expect during the counting process. 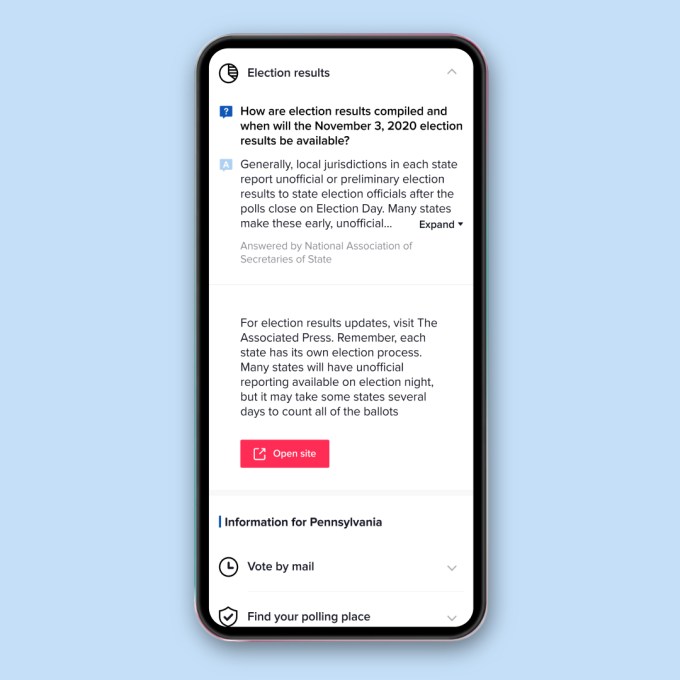 TikTok will also link out to the U.S. Election Assistance Commission (EAC) website for information about polling locations and hours.

And it will link to the Election Protection Hotline number, which provides assistance with voting difficulties (in English, Spanish, Asian languages and Arabic, as well as a video call option for American Sign Language). 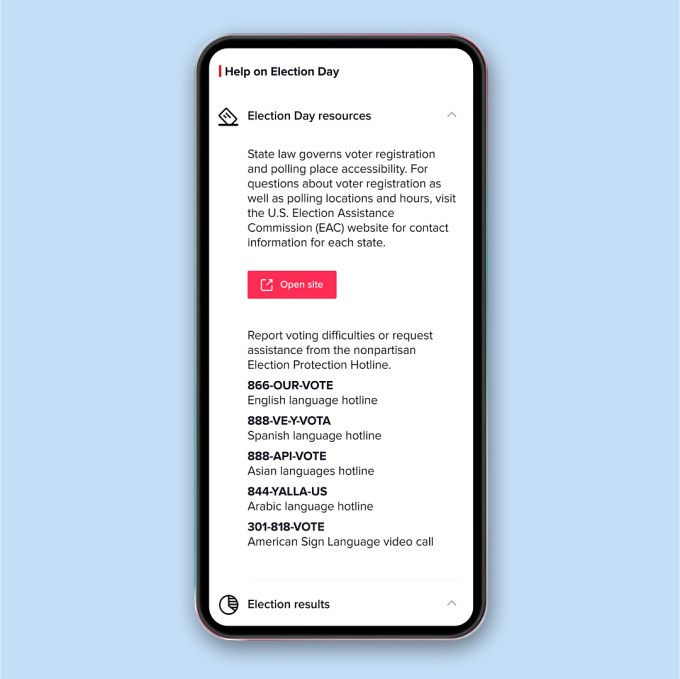 The election guide was first introduced in the TikTok app last month to help connect TikTok’s 100 million U.S. users to partner organizations that offered information about the candidates, how to vote, media literacy and more. At launch, the guide included information from the National Association of Secretaries of State, BallotReady, SignVote and several others.

The information is organized in an easy-to-read format, but TikTok itself is not creating the content — it’s pulled from partners and cited accordingly. In other cases, TikTok offers a short snippet of information with a link to the partner site to “learn more.”

TikTok users are today pointed to the guide by way of a banner that appears across all election-related videos. They also can choose to visit it directly from TikTok’s Discover Page, where it has a permanent home during election season.

With the update, if users encounter videos about the elections — for example, if a video discusses the current results — the user could tap the link to see the AP’s live election map. This could be useful because TikTok’s in-feed videos aren’t always the most recent. 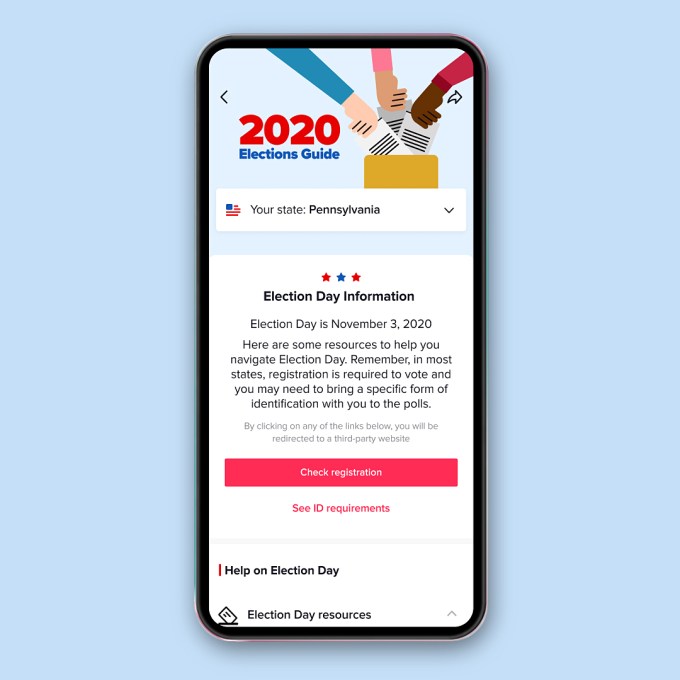 It also claimed to be working with experts, including the U.S. Department of Homeland Security, to protect against foreign influence on its platform. And it banned deepfakes.

Like other social media platforms, TikTok said it isn’t accepting political ads. However, unlike Facebook and Google, which only committed to temporary pauses on these ads before and after election day, TikTok announced its decision in October 2019, explaining that the nature of political ads didn’t fit with the experience its users expect on its platform.

Ahead of today’s news about the expanded election guide, TikTok also launched an Election Safety Center to increase transparency about how its policies apply to a range of election-related content, including when and why content is removed.

While it’s common for a large tech platform to offer election-related resources to its user base — Facebook, Google, Snapchat and Twitter all do the same — TikTok’s position is unique. The app is currently trying to fight off the Trump administration’s ban of its app in the U.S., and its long-term fate in the country is still unknown.

Despite these issues, TikTok has not slowed on developing new features, adding resources, or expanding its platform in other ways. Just yesterday, for example, TikTok announced a partnership with Shopify over social commerce initiatives.

TikTok’s new election guide resources will roll out on November 3 in the U.S.