Starting today, Twitter users in the U.S. will see two large notices at the top of their feeds that aim to “preemptively debunk” misinformation related to voting. The striking messages are designed to push back against the deluge of false claims about the 2020 election.

One notice warns users that they “might encounter misleading information” about mail-in voting while the other attempts to head off online election-related chaos by cautioning that the results of the U.S. election may be delayed.

Delayed results are a very possible outcome in an election that will see more ballots than ever cast through the mail. States have differing rules about when mailed ballots can begin to be tallied, making it possible that official results may indeed take time to trickle in — a situation that it’s wise to normalize in advance. 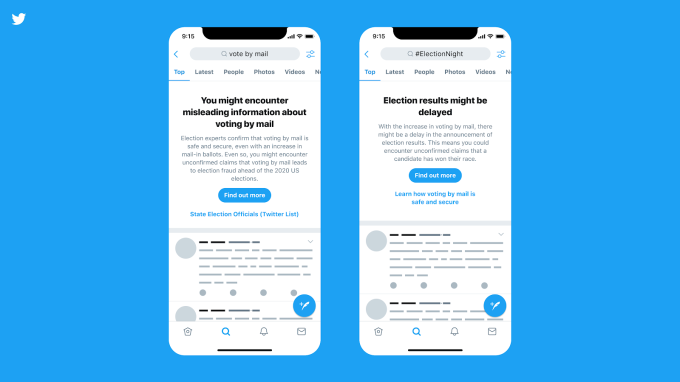 The prompts will point users to Twitter Moments that collect authoritative information on both topics. The notices will also pop up in searches of relevant terms and hashtags.

Social media companies have scrambled to ready their platforms for the unique challenges of a deeply contentious U.S. election in the midst of a worsening national health crisis. While those efforts have been mixed — some weak, some more robust — serving proactive, attention-grabbing notices to everyone is a solid step up from the easy-to-miss misinformation “labels” that get tacked onto false claims across Twitter and Facebook.