Cooler Screens, which uses interactive digital displays to replace the glass doors in store cooler aisles, is announcing that it has raised more than $80 million in Series C funding.

Cooler Screens is led by co-founder and CEO Arsen Avakian, who previously was founder and CEO of Argo Tea. Avakian told me that before starting Argo, he worked at a number of technology companies, including i2 Technologies.

“The joke was, I went from IT to tea, and now I’m back to IT,” he said. He also suggested the startup draws on all of his past experience — while Cooler Screens is a tech company, it also requires an understanding of how to build a consumer brand.

The idea of replacing simple glass doors with electronic displays might seem unnecessary or even annoying, but Avakian said his first priority is “winning consumers’ hearts.”

After all, we’re used to doing as much research as we want before buying a product online, but very little of that information is available in the brick-and-mortar shopping experience. Avakian said Cooler Screens is changing that: “You could ask the screens, ‘Show me all the vegan items’ or ‘How many calories are in this product?’ ”

And it’s already available in some stores. After installing screens in 50 Walgreens locations in the Chicago area (where Cooler Screens is based), the startup announced plans to expand to 2,500 Walgreens stores across the United States. Other partners include Kroger and GetGo.

Avakian said he pitches stores on a partnership for “sophisticated digital merchandising and contextual advertising technology.” 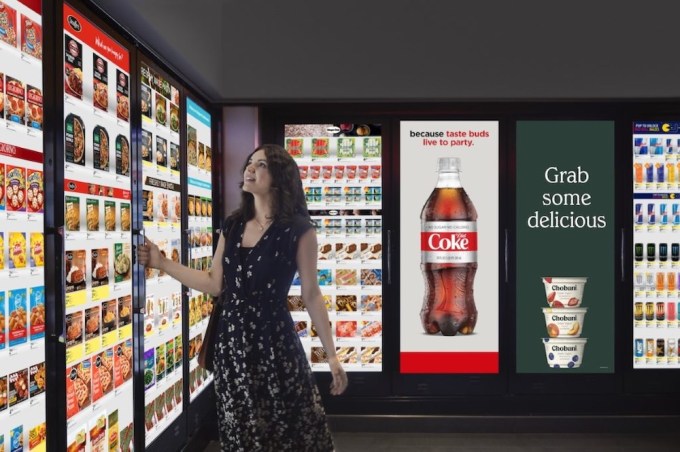 He added, “We can digitize your stores, and as we do that, we’re willing to put our money where our mouth is and show you that the consumers will love us: The NPS scores will be through the [roof]. If we prove all of that to you, we’d love to start bringing into this marketplace the CPG brands that are relevant to consumers in your stores, and now we become the last mile of advertising.”

Avakian said that unlike most forms of digital advertising, Cooler Screens doesn’t gather any personal information about the viewer. Instead, its appeal to advertisers is the fact that it gives them a way to reach consumers “in a safe environment, where they’re in the mindset for shopping.”

Avakian said that since March, the startup has grown from 40 brands advertising on the platform to nearly 150.

Noting that stores like Walgreens and Kroger have been essential for many shoppers during the pandemic, Avakian said, “It’s obvious to everyone that brick-and-mortar retail is here to stay. It just needs to reinvent itself.”