With FastAF, consumers can now order directly from those Darkstores for same-day delivery. FastAF currently offers 1,200 items from 170 brands. Fast AF has partnered with DoorDash to handle deliveries and a different company for returns. To return an item, customers can head into the FastAF app to request a return and then someone will come pick it up from you and take it back to the Darkstore fulfillment center. 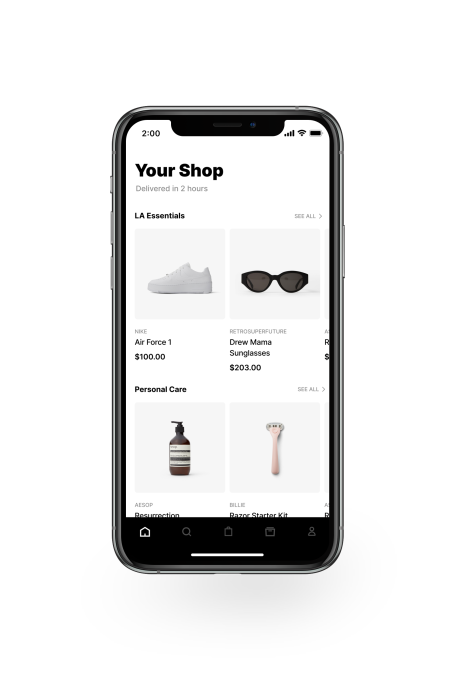 While all of the products available on FastAF will come from a Darkstore, not all of the retailers featured in FastAF are Darkstore customers.

“We wanted to have a very good consumer experience out of the gate and use the demand to inform whether we should officially partner with those brands,” founder and CEO Lee Hnetinka told TechCrunch. “The way we’ve chosen the categories and the products are really around what’s relevant in the times right now and what’s essential.”

FastAF features items like masks, hand sanitizer and soap, but also sneakers, sunglasses and other products. FastAF sells the products at MSRP but charges consumers fees related to delivery and fulfillment. Initially, FastAF will waive that delivery fee and is considering rolling out a free delivery option for orders over a certain amount.

Hnetinka, you may remember, founded WunWun back in 2012 to provide on-demand delivery for stores and businesses. The company, which was a strong competitor to Postmates, ultimately shut down in 2015 and then sold its assets to Alfred.

“For WunWun, we were powering offline online,” Hnetinka told me. “We had runners that went to local stores and brought you things in as fast as 30 minutes. With Darkstore, we’re powering online offline. The next wave of that has always been a consumer facing app to enable all of the brands on these e-commerce companies to deliver products quickly. We felt there was no place to get the brands you have a high affinity towards from. These are the types of brands you weren’t able to get fast, previously.”

FastAF is currently only available in Los Angeles, but the plan is to launch in New York later this year. San Francisco is on the road map, but Hnetinka did not share an exact timeline.

Darkstore, the company behind FastAF, has raised more than $30 million in funding. Its most recent funding came last September as part of a $21 million Series B round led by EQT Ventures.