Tesla has lowered the price of another vehicle. This time it’s the Model Y, an electric SUV the company started shipping in March. The long-range all-wheel drive version of the car is now listed with a purchase price of $49,990, or $3,000 less than what it was before. The car’s new pricing was first reported by Electrek over the weekend. 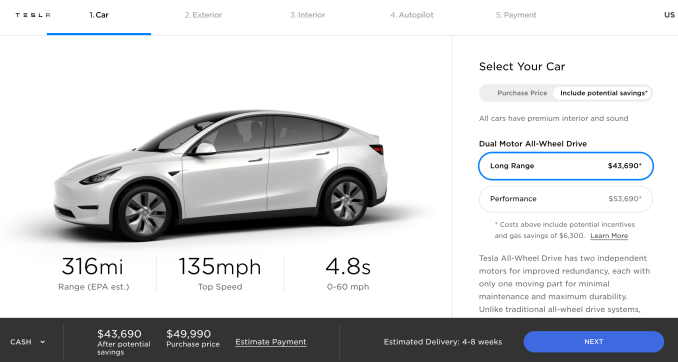 In May, Tesla cut prices for several of its electric cars, including high-end vehicles like the Model S sedan and the Model X SUV. The new pricing comes as U.S. automakers try to attract buyers despite the economic fallout of the COVID-19 pandemic.

The traditional big three U.S. automakers — Ford, GM and Fiat Chrysler Automobiles — are offering 0% financing rates, in addition to deferred or longer-term payment options, while other automakers have also announced incentives and payment plans to appeal to new buyers and keep existing owners from defaulting on loans.

At the beginning of this month, Tesla said it delivered 90,650 vehicles in the second quarter, a 4.8% decline due to the pandemic and suspension of production at its main U.S. factory for several weeks — but it’s still better than analysts’ expectations. Most of the deliveries, or 80,050, were Model 3 and Model Y, while the remaining 10,600 were its higher-end Model S and Model X.