Forecast, a new project from Facebook’s internal R&D group, NPE Team, is launching today to build a community around predictions. The iOS app will allow users to ask questions and then use in-app points to make predictions about what might happen in the future. Users can also create, discuss and view these crowdsourced predictions.

At launch, only invited participants in the U.S. and Canada will be allowed to make predictions and engage in conversations while the app is in beta testing. But these predictions and related discussions will be publicly accessible on the Forecast website, and made shareable.

Before today, Facebook tested the product internally with a small set of employees. Their initial forecasts will form the initial core content in the app at launch.

Starting now, Facebook will invite members of the health, research and academic communities to make predictions about the COVID-19 pandemic and its impact on the world. 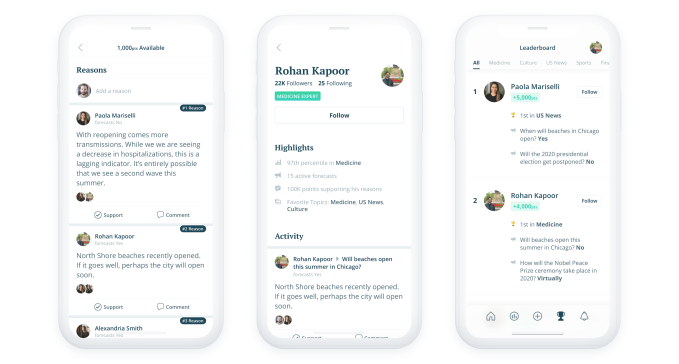 At a time when Facebook and other major tech platforms are under fire for their role in aiding the spread of misinformation, fake news, propaganda, conspiracy theories and other non-factual content presented as truth, an app focused on making “guesses” about the future seems ill-advised — however educated those guesses may be. This is particularly concerning because much of the app’s content will focus on guesses about COVID-19.

Forecast’s predictions may help show what people are thinking, but COVID-19 isn’t a game. To understand the world, scientists form a hypothesis, which is essentially an expanded form of an educated guess. But they don’t then crowdsource voting to determine if a hypothesis is true — they test, experiment, gather supporting data, try to prove and disprove the hypothesis and ultimately aim to publish their findings and have them peer-reviewed.

The Forecast app turns the hypothesis into the end result, in a way. The app lets users make a forecast and explain their reasoning — in other words, form a hypothesis. But instead of doing the work to test the forecast, through the application of the scientific method, Forecast will track the votes a given question receives.

For example: “When will the first COVID-19 vaccine candidate begin phase 3 trials?” or “When will most U.S. residents be treated with a COVID-19 vaccine?” In non-COVID questions, you may come across something like “Will the US Presidential Election be fully or partially postponed?”

Questions will be reviewed by the Forecast team and edited for clarity, if needed. Users will be notified if their question is published.

At some point, the question will be determined as “settled,” based on an elapsed time period or because an event has occurred. For instance, if users were guessing when a vaccine would be released, and then it’s actually released, the questions around that topics would be “settled.”

Forecast’s polls are given aesthetically pleasing charts and graphs, which can be shared outside the app. That means users could start posting these guesses and the crowdsourced responses to sites like Facebook, where the line between fact and fiction has already blurred. That could further complicate people’s understanding of what is already a complex topic: the COVID-19 pandemic.

Facebook users who see these shared “forecasts” may believe they have some basis in science and research, when instead, they are the result of a social polling app.

Of course, there is some fun in betting on world events and seeing if they turn out to be true, and there is even some value in organizing a wider community’s collective “best guesses” about a future event to gain an understanding of what people are thinking at a given time. Crowdsourced predictions have their place, as well. But spreading out specific, COVID-19 predictions to Facebook seems like an idea that’s fraught with potential problems and complications.

And Facebook’s goal here is only to test its own hypothesis — that a standalone, community-based predictions app that rewards a participatory audience with social credit will surface insightful voices and thoughtful discussions.

In the end, however, it seems like Facebook is looking for some angle that could prompt thought leaders to engage in meaningful discussions about subjects they know best on a Facebook platform. These sorts of discussions are difficult to have in Facebook’s comments section around a post — as comments, more often than not, are a place people go to troll, argue, threaten and otherwise derail a conversation. Forecast organizes these experts around a topic and allows them to debate. As a self-contained space with a vetted crowd of participants, that could be interesting. Making the data broadly shareable is an issue, however.

Facebook says the questions in Forecast will be moderated for clarity using Forecast’s own moderation guidelines and Facebook’s Community Standards. That means questions can’t mention death, or sexual or violent assault of any individual, including public figures. (This isn’t meant to be some sort of new internet Death Clock, for example.) Hate speech isn’t allowed. Questions around illegal content or those involving personal information also aren’t permitted, along with other guidelines detailed here.

The Forecast app is live on the iOS App Store here.