For the last few years, Microsoft has given Windows enthusiasts the ability to opt in to early release “rings,” with the choice to pick between “fast” and “slow” rings, as well as a relatively stable “release preview” option. Today, the company announced a major change to this program as it is moving to release channels, similar to what you’re probably familiar with from most browser manufacturers.

“We are transitioning and converting our current ring model, based on the frequency of builds, to a new channel model that pivots on the quality of builds and better supports parallel coding efforts,” writes Microsoft principal program manager lead Amanda Langowski in a blog post today.

She notes that the result of the ring-based system was that in the middle of 2019, for example, Windows Insiders were running builds from three different releases, depending on which ring they chose. 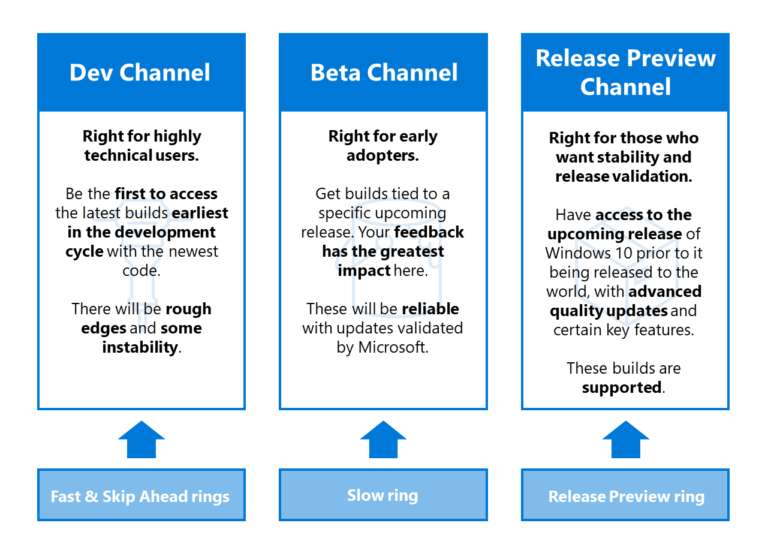 “As we continue to evolve the way we release Windows 10 and the diversity of Insiders we serve is greater than ever, it is critical that Insiders have a flighting option that is tailored to their needs,” she adds. “We believe the best way to do this is to shift focus from frequency to quality.”

So starting later this month, the “fast” ring will become the Dev Channel, the “slow” ring the Beta Channel and the “release preview” will now be known as the Release Preview Channel.

The Dev Channel is meant for users who want to get very early access to new features, which isn’t all that different from fast rings, but what’s important here is that this channel isn’t tied to any specific release. New features in this channel will make their way into releases once they are ready, whether that’s as part of a major update or a servicing release. Because of its unstable nature, Microsoft says this release is mostly meant for highly technical users.

As for the Beta Channel, the main difference here is that it is really the beta version of a specific release and meant for early adopters. And the Release Preview is exactly what you would think, and meant to test relatively stable builds before they get shipped to the wider Windows 10 user base (and with that, IT admins can also test those releases ahead of their release to a company’s employees, too).

If you’re part of the Windows Insider program, those changes will be automatic and start with builds that are set to launch later this month.