Amid increasing antitrust scrutiny by U.S. regulators, Apple announced an update on its App Store ecosystem. While the company normally shares some App Store metrics during its WWDC keynote, it’s today detailing the results of a new study that claims the App Store ecosystem facilitated half a trillion ($519 billion) in billings and sales globally in 2019. This is a new and broader figure than has been previously reported, as it includes all transactions the App Store facilitates, not just those on which Apple takes a commission.

The study, which was conducted by economists at the Analysis Group, is the first to attempt to comprehensively analyze the App Store ecosystem, which is now home to nearly 2 million apps. First launched in 2008, the App Store is visited by half a billion people every week across 175 countries. Collectively, users have download apps hundreds of billions of times to their devices. The Apple Developer ecosystem, meanwhile, supports 23 million developers. 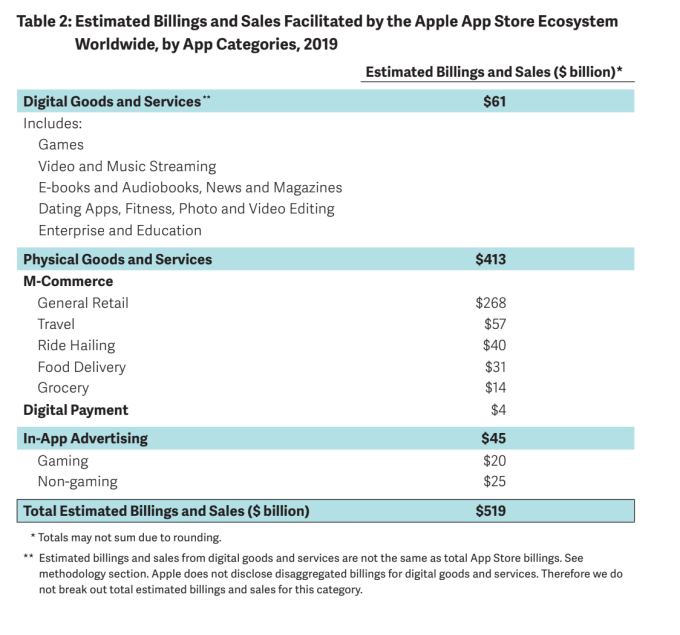 The new study examines the wider world of transactions on the App Store. While Apple earlier announced it has made $155 billion in direct payments to developers to date, the study attempts to position those payments as a “small fraction” of the total when sales from other sources — like physical goods and services — are also included.

In other words, the study is taking into consideration the number of retail sales flowing through the App Store, like when you shop the Target or Best Buy iOS app, for example. Or when you book an Uber or order food from DoorDash or Grubhub.

The study notes that because Apple only receives commissions from the billings associated with digital goods and services, “more than 85% of the $519 billion total accrues solely to third-party developers and businesses of all sizes,” it says.

Here’s how the $519 billion breaks down, specifically.

The study estimates sales from Physical Goods and Services accounted for the largest share, at $413 billion. Within this category, M-commerce apps generated the vast majority of sales, and Retail was the largest at $268 billion. This Retail category includes brick-and-mortar stores like Target as well as virtual marketplaces like Etsy, but excludes grocery delivery services.

Other top M-commerce apps included Travel apps like Expedia and United, coming in at $57 billion. Ride-hailing apps like Uber and Lyft comprised $40 billion in sales. And Food Delivery apps, like Grubhub and DoorDash, made up $31 billion. Grocery Delivery accounted for just $14 billion — but remember that this study is focused on pre-COVID-era data from 2019.

Meanwhile, the billings from the Digital Goods and Services section reached $61 billion in 2019. This includes music and video streaming services, fitness, education, e-books, audiobooks, news, magazines and dating apps. The Games category was the largest within digital goods and services, but the study didn’t detail how much of the $61 billion was attributed to games versus the other apps. The lack of sub-category data is an interesting omission given that Apple sells games, a music streaming service, a video streaming service, audiobooks and e-books, and a subscription news service.

In-app Advertising Sales accounted for another $45 billion and 44% of that figure ($20 billion) was from advertising in games. Non-game apps that generated substantial in-app advertising sales are often free, like Twitter and Pinterest, while some offer subscriptions, like MLB.com or The New York Times, the study said.

The timing of the study’s release is not coincidental.

Along with Amazon, Google parent Alphabet and Facebook, U.S. House antitrust investigators have been pressing Apple to testify as part of the Judiciary Committee’s tech competition probe, Axios recently reported. Amazon is the only one of the four to have publicly confirmed its plans to participate.

For its part, Apple has been accused of running an anti-competitive app marketplace — one where its own services compete against rivals. Those competitors then have to pay Apple commissions for transactions the App Store facilitates. Apple also doesn’t allow other apps that sell apps, like the Epic Games Store. And it uses its favored status to wipe out competitors by launching similar products that can more deeply integrate with its OS — as it plans to do with its upcoming lost item finder, AirTags, which will work better than the current market leader, Tile, due to its first-party status.

In that light, it’s easy to see how this study is attempting to shift the narrative from one about how much Apple profits off developers — developers who are often now also competitors — to one that characterizes the App Store as one where business transactions flow freely. It paints a picture of industries that generate billions without Apple’s hand in the pot, so to speak.

But this ignores all the workarounds businesses have had to take to avoid Apple’s cut.

For example, Amazon, for years, has directed users to the web to purchase e-books, audiobooks and, until recently, videos. (The latter is only now allowing in-app transactions due to a special deal that was cut.) A number of top developers, including Netflix and Spotify, dropped in-app sign-ups from their apps in order to avoid the so-called “Apple tax.” Those that do the same will sometimes see a decline in subscribers, as a result.

The study characterizes these workarounds as developers’ “choice.” 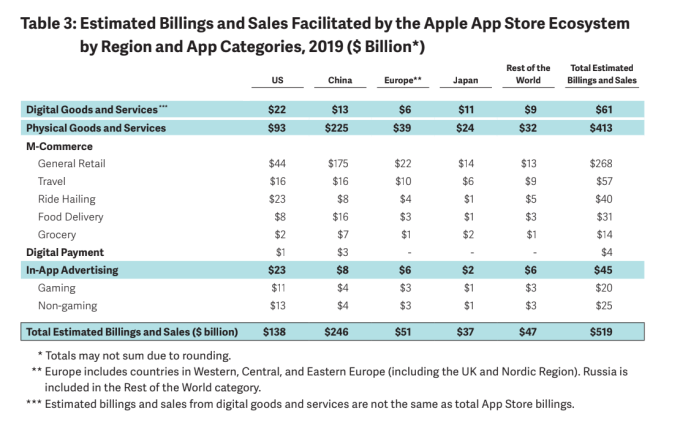 The study is also notable for its examination of the geographic makeup of that $519 billion figure. It says the U.S. accounts for $138 billion compared with China’s $246 billion, for example. That’s followed by Europe ($51 billion), Japan ($37 billion) and then the rest of the world ($47 billion).

Of course, this study on the 2019 App Store arrives in the middle of the coronavirus pandemic, which will lead to a wildly different set of numbers for 2020 and beyond.

“The App Store…is the world’s safest and most vibrant app marketplace,” touted Apple in a release. “It helps creators, dreamers, and learners of all ages and backgrounds connect with the tools and information they need to build a brighter future and a better world,” it said.

Correction: An earlier version of this post said grocery delivery was $4 billion instead of $14 billion. The typo has been corrected. The chart was accurate.