A new startup called twine wants to help people feel less isolated and alone. Though the project has been in the works for around six months, it’s launching at a time when people are struggling with being cut off from family, friends, neighbors, co-workers and others due to the COVID-19 outbreak and the resulting government lockdowns and self-quarantines. Described simply as a “Zoom for meeting new people,” twine is a group video chat experience where people are encouraged to have meaningful discussions that spark new friendships.

In twine, users are matched with four other partners who they’ll then have 1-to-1 conversations with for eight minutes apiece. The full gathering lasts for a total of 40 minutes, including the virtual guide portion where the ground rules are set. 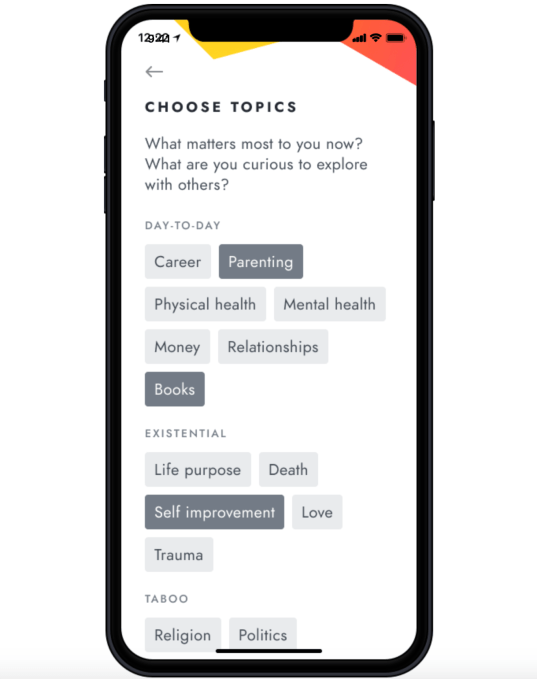 Participants choose from a library of more than 250 “deep” questions, then get matched with partners who want to explore the same topics. They then RSVP for twine’s digital gatherings in their time zone and check in when it’s time to start.

The overall experience is meant to help people find connections by skipping the small talk and going straight to what matters. But the focus is on friendships, not dating. Afterward, users are encouraged to set reminders to get back in touch and meet again in future gatherings.

There’s a hint of Chatroulette to this idea, given that users could be matched to people who are only there to disrupt the experience, in theory at least. But the company aims to reduce the potential for this sort of shock trolling by permanently banning members who are flagged for making others uncomfortable in any sort of way. We also noticed the app asks for your email, phone and ZIP code during its onboarding process, so it’s not entirely an anonymous experience. 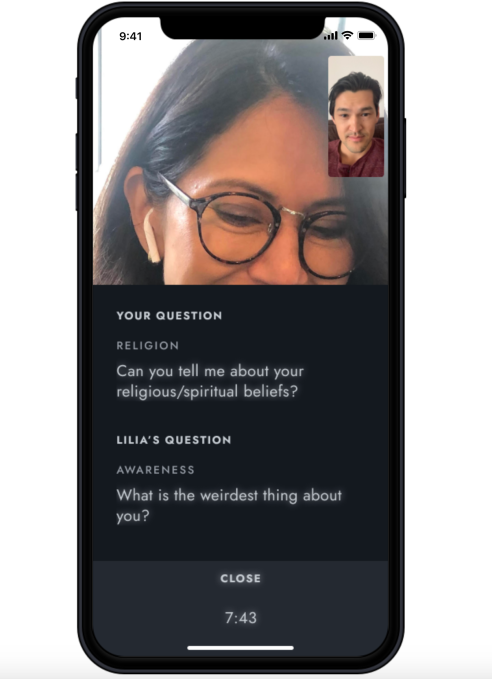 In addition, twine requires users to rate each conversation when it ends, and members have to be pre-approved before joining a chat. The company says it’s looking to move toward “real ID only” in the future to further reduce the potential for trolling.

That said, there’s still a bit of a risk in chatting openly with strangers about highly personal topics. Twine’s guidelines say that conversations are not to be discussed with others, but this is not a doctor-patient relationship with legal protections for confidentiality. It’s just a group chat app with people who may or may not be there to follow the rules.

That said, the internet is currently experiencing a rebirth of sorts, due to COVID-19. People are coming online to look for connections. Social media is actually becoming social. This is an ideal environment to test something as optimistic as twine, which at its core believes people are largely good and will use the technology appropriately.

The idea for twine comes from serial entrepreneurs Lawrence Coburn and Diana Rau. Coburn spent the last nine years as founder and CEO of mobile events technology provider DoubleDutch, which was acquired by Cvent in 2019. Rau, meanwhile, was co-founder and CEO of Veterati, a digital mentoring platform for veterans that had also leveraged 1-to-1 conversations as part of its community-building experience.

The founders already knew each other from the Georgetown entrepreneurship ecosystem. And Coburn was an advisor to Veterati, and Rau had worked at DoubeDutch, as well. 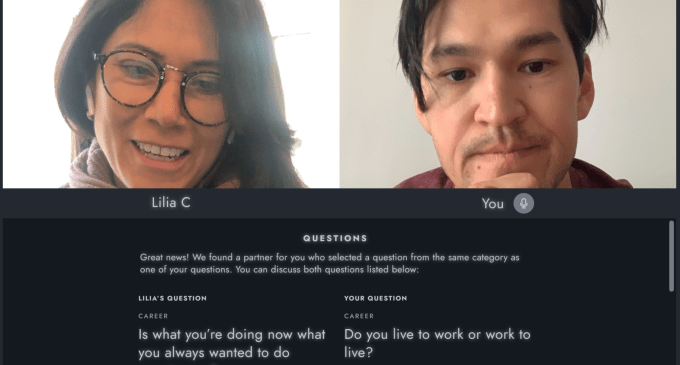 Coburn describes his vision for twine as something in between a new social network and a substitute for those who are spiritual, but not religious, in terms of helping people who want to “be better humans.” Rau says she wanted to work on twine to help end loneliness by giving people a place to explore humanity on a one-on-one basis.

The app was originally intended to connect people who would meet up in real-life gatherings, but the coronavirus outbreak shifted those plans and accelerated launch plans.

“Launching a new company during the best of times is really, really hard. During a global pandemic? Yikes!,” wrote Coburn, in a blog post about the launch. “But as the new reality settles in, it has become clear to me that the world needs twine or something like it more than ever. The macro forces that inspired Diana and I to start twine – loneliness, polarization, isolation – will only be exacerbated by social distancing. A societal loneliness that was already classified as an epidemic pre coronavirus, is about to get way, way worse,” he added.

The startup is backed by $1.4 million in seed funding, closed on March 12, led by DoubleDutch investor, Hinge Capital. Other investors from DoubleDutch have also returned to fund twine, including FJ Labs, Brand Foundry and Bragiel Brothers. Angels in the round include April Underwood (Slack), Jay Hoffmann (Rocketmiles), Scott Heiferman (Meetup) and Vishal Kapur (Screenhero).

In the future, twine aims to be subscription-based and launch real-life gatherings, as originally planned, when it’s safe to do so.

The app is currently in private beta on iOS and web. Currently, it has a waitlist of around 1,000 users, mainly from New York City and San Francisco, but twine will be available worldwide.