The flood of status symbol content into Instagram Stories has run dry. No one is going out and doing anything cool right now, and if they are, they should be shamed for it. Beyond sharing video chat happy hour screenshots and quarantine dinner concoctions, our piece-by-piece biographies have ground to a halt. Oddly, what remains feels more social than social networks have in a long time.

A house-arrest Houseparty, via StoicLeys

With no source material, we’re doing it live. Coronavirus has absolved our desire to share the recent past. The drab days stuck inside blur into each other. The near future is so uncertain that there’s little impetus to make plans. Why schedule an event or get excited for a trip just to get your heartbroken if shelter-in-place orders are extended? We’re left firmly fixed in the present.

What is social media when there’s nothing to brag about? Many of us are discovering it’s a lot more fun. We had turned social media into a sport but spent the whole time staring at the scoreboard rather than embracing the joy of play.

But thankfully, there are no Like counts on Zoom.

Nothing permanent remains. That’s freed us from the external validation that too often rules our decision making. It’s stopped being about how this looks and started being about how this feels. Does it put me at peace, make me laugh, or abate the loneliness? Then do it. There’s no more FOMO because there’s nothing to miss by staying home to read, take a bath, or play board games. You do you.

Being social animals, what feels most natural is to connect. Not asynchronously through feeds of what we just did. But by coexisting concurrently. Professional enterprise technology for agenda-driven video calls has been subverted for meandering, motive-less togetherness. We’re doing what many of us spent our childhoods doing in basements and parking lots: just hanging out.

For evidence, just look at group video chat app Houseparty, where teens aimlessly chill with everyone’s face on screen at once. In Italy, which has tragically been on lock down since COVID-19’s rapid spread in the country, Houseparty wasn’t even in the top 1500 apps a month ago. Today it’s the #1 social app, and the #2 app overall second only to Zoom which is topping the charts in tons of countries.

Houseparty topped all the charts on Monday, when Sensor Tower tells TechCrunch the app’s download rate was 323X higher than its average in February. As of yesterday it was #1 in Portugal (up 371X) and Spain (up 592X), as well as Peru, Argentina, Chile, Austria, Belgium, and the U.K. I despite being absent from the chart a week earlier. Apptopia tells me Houseparty saw 25 downloads in Spain on March 1st and 40,000 yesterday. 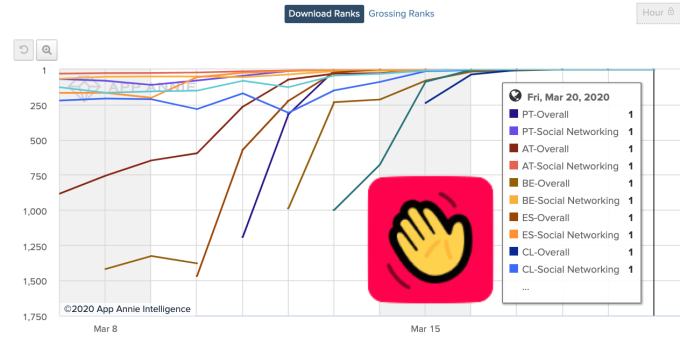 Houseparty rockets to #1 in many countries

A year ago Houseparty was nearly dead, languishing at #245 on the US charts before being acquired by Fortnite-maker Epic in June. Our sudden need for unmediated connection has brought Houseparty roaring back to life, even if Epic has neglected to update it since July.

“Houseparty was designed to connect people in the most human way possible when they are physically apart” the startup’s co-founder Ben Rubin tells me. “This is a time of isolation and uncertainty for us all. I’m grateful that we created a product that gives a sense of human connection to millions people during this critical moment.”

Around the world, apps for direct connection are spiking. Google Hangouts rules in Sweden. Discord for chat while gaming is #1 in France. Slack clone Microsoft Teams is king in the Netherlands. After binging through Netflix, all that’s left to entertain us is each other.

If we’re all stuck at home, it doesn’t matter where that home is. We’ve been released from the confines of which friends are within a 20 minute drive or hour-long train. Just like students are saying they all go to Zoom University since every school’s classes moved online, we all now live in Zoom Town. All commutes have been reduced to how long it takes to generate an invite URL.

Nestled in San Francisco, even pals across the Bay in Berkeley felt far away before. But this week I had hour-long video calls with my favorite people who typically feel out of reach in Chicago and New York. I spent time with babies I hadn’t met in person. And I kept in closer touch with my parents on the other coast, which is more vital and urgent than ever before. 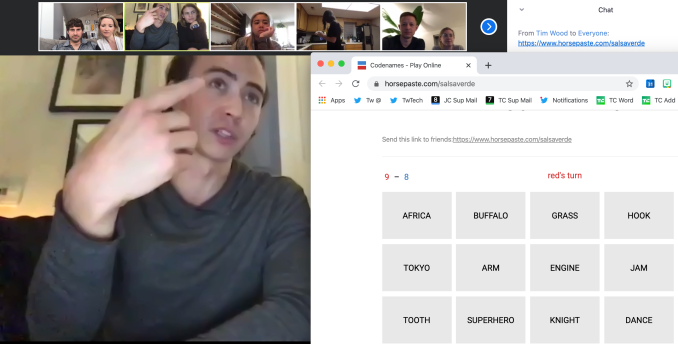 Typically, our time is occupied by acquaintances of circumstance. The co-workers who share our office. The friends who happen to live in the neighborhood. But now we’re each building a virtual family completely of our choosing. The calculus has shifted from who is convenient or who invites us to the most exciting place, to who makes us feel most human. Even celebrities are getting into it. Rather than pristine portraits and flashy music videos, they’re appearing raw, with crappy lighting, on Facebook and Instagram Live. John Legend played piano for 100,000 people while his wife Chrissy Teigen sat on screen in a towel looking salty like she’s heard “All Of Me” far too many times. That’s more authentic than anything you’ll get on TV.

And without the traditional norms of who we are and aren’t supposed to call, there’s an opportunity to contact those we cared about in a different moment of our lives. The old college roommate, the high school buddy, the mentor who gave you you’re shot. If we have the emotional capacity in these trying times, there’s good to be done. Who do you know who’s single, lives alone, or resides in a city without a dense support network?

Reforging those connections not only surfaces prized memories we may have forgotten, but could help keep someone sane. For those who relied on work and play for social interaction, shelter-in-place is essentially solitary confinement. There’s a looming mental health crisis if we don’t check in on the isolated.

The crisis language of memes

It can be hard to muster the energy to seize these connections, though. We’re all drenched in angst about the health impacts of the virus and financial impacts of the response. I certainly spent a few mornings sleeping in just to make the days feel shorter. When all small talk leads to rehashing our fears, sometimes you don’t have anything to say.

Luckily we don’t have to say anything to communicate. We can share memes instead. 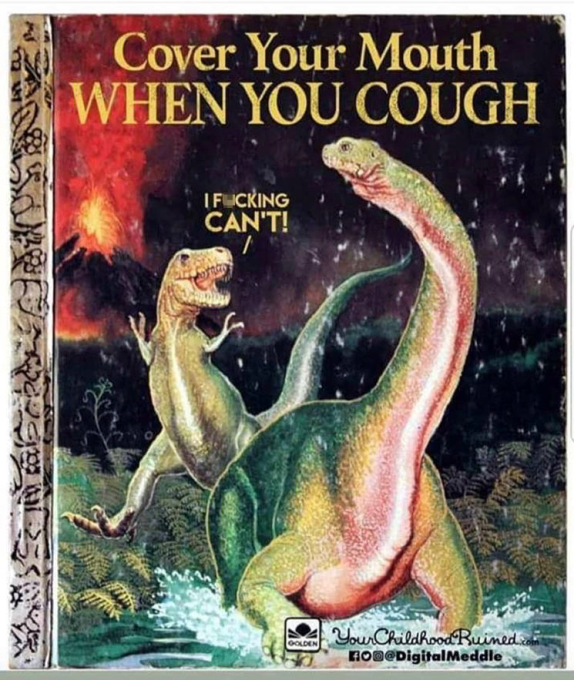 My father-in-law sent me this. That’s when you know memes have become the universal language

The internet’s response to COVID-19 has been an international outpour of gallow’s humor. From group chats to Instagram joke accounts to Reddit threads to Facebook groups like quarter-million member “Zoom Memes For Quaranteens”, we’re joining up to weather the crisis.

A nervous laugh is better than no laugh at all. Memes allow us to convert our creeping dread and stir craziness into something borderline productive. We can assume an anonymous voice, resharing what some unspecified other made without the vulnerability of self-attribution. We can dive into the creation of memes ourselves, killing time under house arrest in hopes of generating smiles for our generation. And with the feeds and Stories emptied, consuming memes offers a new medium of solidarity. We’re all in this hellscape together so we may as well make fun of it. 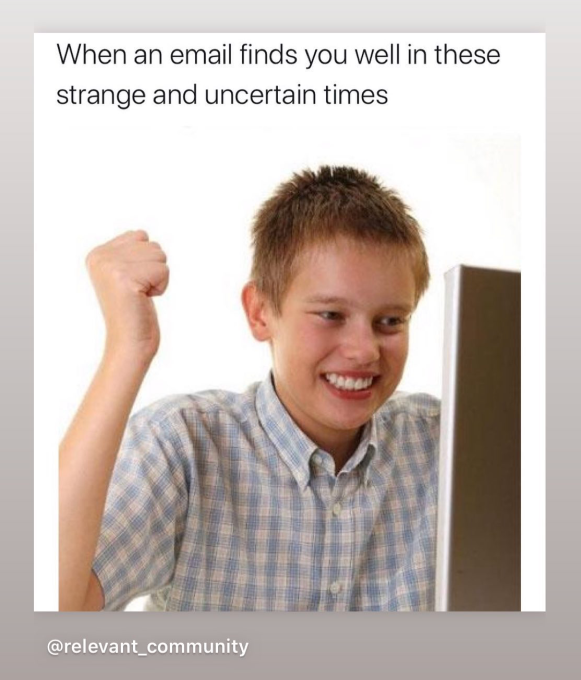 The web’s mental immune system has kicked into gear amidst the outbreak. Rather than wallowing in captivity, we’ve developed digital antibodies that are evolving to fight the solitude. We’re spicing up video chats with board games like Codenames. One-off livestreams have turned into wholly online music festivals to bring the sounds of New Orleans or Berlin to the world. Trolls and pranksters are finding ways to get their lulz too, Zoombombing webinars. And after a half-decade of techlash, our industry’s leaders are launching peer-to-peer social safety nets and ways to help small businesses survive until we can be patrons in person again.

Rather than scrounging for experiences to share, we’re inventing them from scratch with the only thing we’re left with us in quarantine: ourselves. When the infection waves pass, I hope this swell of creativity and in-the-moment togetherness stays strong. The best part of the internet isn’t showing off, it’s showing up.