Tens of millions of merchants and users in India are struggling to make online transactions and use several popular services after the nation’s central bank seized control of Yes Bank, the fourth largest lender in the country.

The emergency takeover of the private sector bank has taken off several financial startups that rely on it to facilitate services such as processing QR codes, point-of-sale terminals as well as transactions through popular UPI infrastructure.

Leading payments app PhonePe, owned by e-commerce giant Walmart, has been inaccessible to tens of millions of its users since Thursday evening (local time). The startup said in a statement that it was working to restore its services and has solved some of the issues for its merchant partners.

“We sincerely regret the long outage. Our partner bank Yes Bank was placed under moratorium by RBI. Entire team’s been working all night to get services back up as soon as possible,” said Sameer Nigam, co-founder and chief executive officer of PhonePe, which is used by more than 175 million users.

In a tweet, Nigam said the startup had multiple redundancies in place, but “never imagined [that] the bank itself would go totally dark like this. Lesson learnt in the hardest possible way. But we’ll come out stronger and more robust.”

Updated at 10.19AM PT: PhonePe says it has resolved the issue. Rahul Chari, co-founder and CTO, tweeted, “Exhausted but exhilarated that we are back fully! After a gruelling 24 hours UPI is fully restored on PhonePe. Many to thank, but we are all just happy to have resumed PhonePe services for our loyal users and merchants!”

BharatPe, a startup that helps merchants accept digital payments, was also facing outage, some merchants said. Its problems were limited, however, as it also uses ICICI Bank, another large private sector bank in the country.

Udaan, a Bangalore-headquartered business-to-business e-commerce platform, said it had asked buyers and sellers on its platform to not use the startup’s QR code service, which is powered by Yes Bank.

Tens of thousands of users in India have reported issues accessing an additional dozen of popular services.

1. Welfare payments to rural economy affected. 31% of AEPS transactions was by a Yes bank Partner company PayNearby. MicroATMs will fail.

2. Moratorium affects 100s of Small Co-ops depending Yes bank as a sponsor bank for NEFT/RTGS/IMPS

New Delhi took over Yes Bank midnight on Thursday, after the Reserve Bank of India said it had no alternative but to implement measures to replace the private sector firm’s board and temporarily restrict withdrawals and suspend all other transactions for 30 days. Yes Bank has struggled for months to raise capital to improve its financials.

According to payments body NPCI, Yes Bank is the technology banking partner for a range of firms including ticketing platforms Cleartrip, MakeMyTrip, and RedBus, food-delivery startup Swiggy, movie ticketing businesses BookMyShow and PVR, Microsoft’s chat service Kaizala, as well as several other Flipkart properties including the marquee service, fashion platforms Jabong, and Myntra. 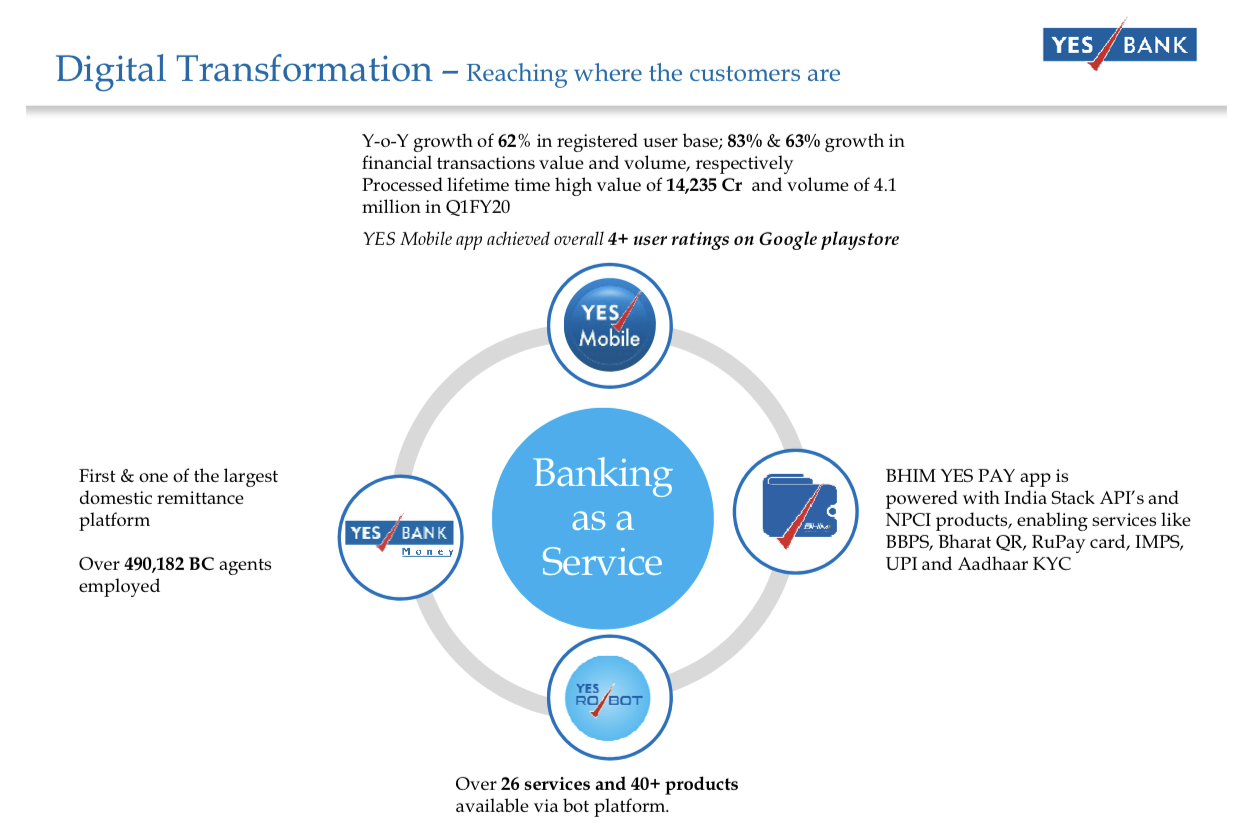 A slide from Yes Bank’s recent presentation to investors

Some of these aforementioned services are only partially impacted as they work with a range of partners to support many payment options for their users.

Most impacted are those people who bank with Yes or are attempting to use UPI payments option, an infrastructure built by a collation of banks in India and used by more than 100 million users. Yes Bank’s tentacles are far reaching in UPI.

Yes Bank’s own internet banking service has been down since midnight Thursday, too.