Amazon may have a market cap of more than $1 trillion, but Finbarr Taylor, CEO of Y Combinator-backed startup Shogun, said the e-commerce giant is “kind of dropping the ball.”

Specifically, he argued that the experience of shopping on Amazon — not what happens after you buy something, but browsing the website itself — is pretty bad, full of sponsored results and fake products.

“What we’re seeing happen is that all this vast wave of direct-to-consumer brands is nibbling around edges of Amazon and beating them on buying experience,” Taylor said.

Shogun was designed to support those brands. Taylor and his co-founder Nick Raushenbush created the first product in 2015, and they treated it as a side project at first. But Taylor said that by May 2017, “It ate up all of our free time and it was obviously much bigger than we expected,” so they quit their jobs (Taylor was working as a software engineer at Y Combinator) and devoted themselves to it full-time.

The company now has 11,000 customers, including MVMT, K-Swiss and Leesa. And today, Shogun is announcing that it has raised a $10 million Series A, led by Initialized Capital, with participation from VMG Partners and YC. (The startup has now raised a total of $12 million.)

The company’s first product, Page Builder, offers a drag-and-drop interface to make it easier for e-commerce brands to build their storefronts on Shopify, BigCommerce, Salesforce and Magento. 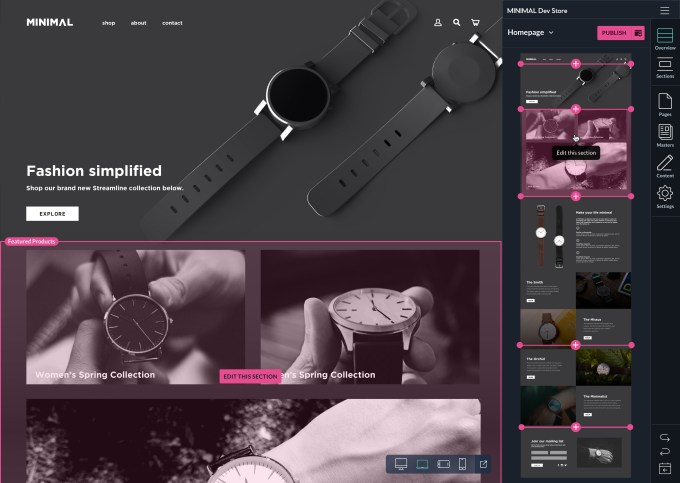 And there’s a new product, Shogun Frontend, which allows brands to create a web storefront that’s entirely customized while still using one of the big commerce platforms as their back end.

Taylor pitched this as part of a broader trend toward “headless commerce,” where the e-commerce front end and back end are handled separately. He suggested that this is a “mutually beneficial” split, as Shopify and its competitors are going “super deep” on building the infrastructure needed to operate a store online, while Shogun focuses on the actual experience of the customer visiting that store.

Meanwhile, website builders like Squarespace and Weebly (owned by Square) have introduced e-commerce features, but Taylor suggested that they’re still “not really a professional choice” for most e-commerce businesses.

As one of the key features of Shogun Frontend, Taylor pointed to the fact that it creates progressive web apps that should be as fast and smooth as a native app.

Brett Gibson, general partner at Initialized Capital and a Shogun board member, made a similar point in a statement:

For DTC brands competing against goliaths like Amazon, Shogun Frontend now gives them features and capabilities once only reserved for enterprise companies. And when it comes to speed, Shogun Frontend’s sub-second load time is the critical difference between retaining or losing a customer.

Taylor added that the company will be “continuing to invest in Page Builder too,” but he suggested that Frontend is “more of an enterprise offering” that can help Shogun’s biggest customers “future proof themselves.”