Vedantu, a Bangalore-based startup that operates a learning app aimed at students aged between 12 to 18, has secured an additional $24 million as part of its Series C financing round. With the infusion of cash, Vedantu looks to serve more students and make its brand a household name.

The fresh infusion to its Series C, which Vedantu first unveiled in August last year, was led by global VC firm GGV Capital. Some existing investors also participated in the round. The $24 million extension broadens the five-year-old startup’s Series C round to $66 million and its total raise to date to $82 million.

Vedantu offers live and interactive courses for students in grades 6 though 12. Students who have enrolled for the interactive sessions are required to answer questions every few minutes by tapping on their smartphone screen or on the desktop. They also can raise their doubts at the end of the session.

Some of these sessions are free for students, but a selection of it requires a subscription, Vamsi Krishna, co-founder and CEO of the startup, told TechCrunch in an interview.

The app has amassed over 75,000 paying subscribers, a figure that Krishna expects to surpass 100,000 this year. The cost of these subscriptions can vary from Rs 100 ($1.4) for students looking for sessions around a particular topic, to Rs 50,000 ($700) for long-term courses that focus on training students for undergraduate-level courses. More than 25 million users come to Vedantu’s app or website each month to consume free lessons.

India has the largest school-age population in the world and households in the nation are willing to invest in their children’s education to advance their lives. About a million students look to pursue undergraduate courses each year, for instance.

But the quality of education and its affordability are two major challenges that millions of students, especially those living in smaller cities and towns, have to confront. An offline coaching centre can have as many as 100 students sitting in the room, with most not getting a chance to engage with the teacher. But for some, it also means there aren’t many teachers left to teach them. 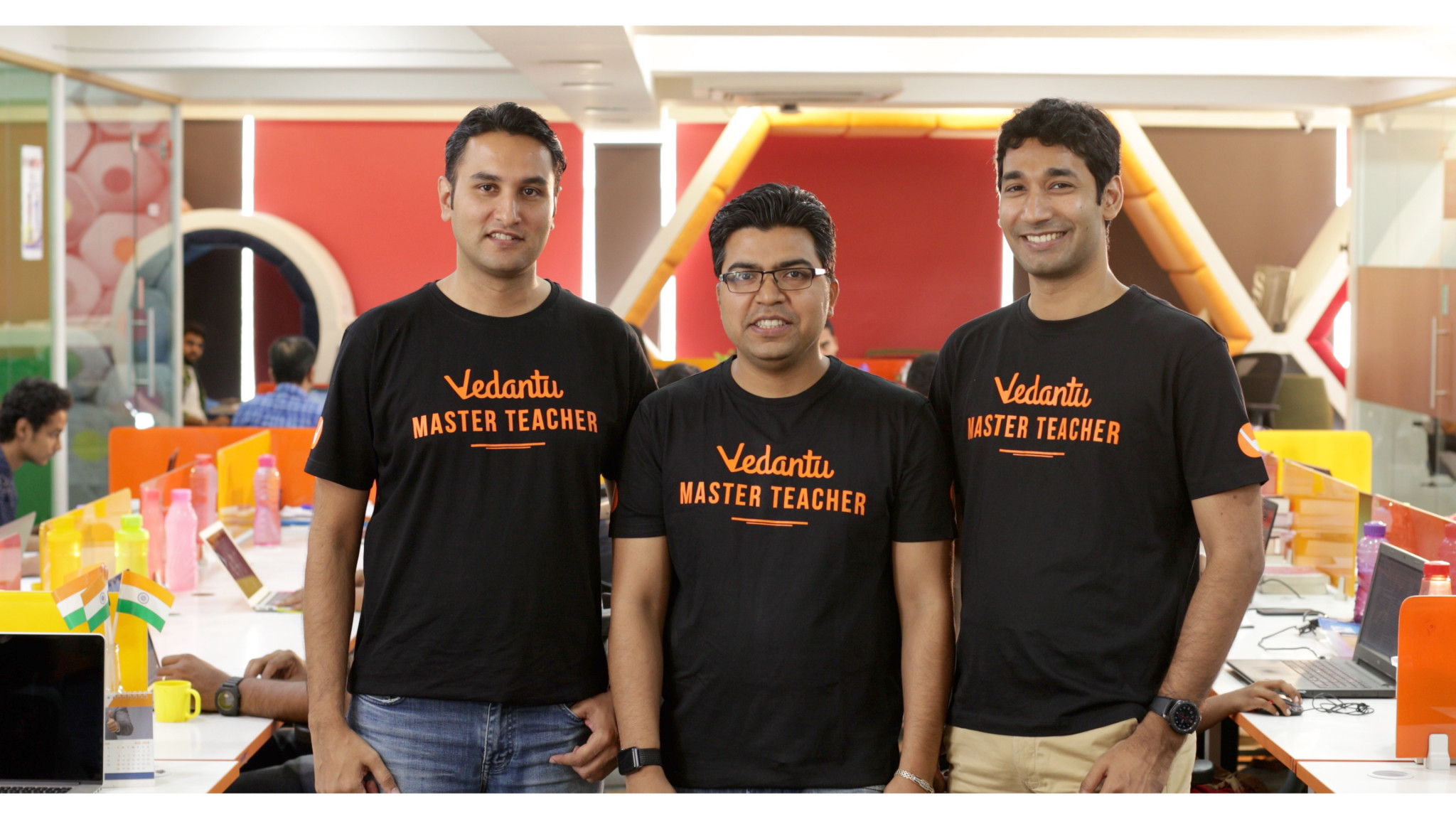 From right to left: Vamsi Krishna, CEO and co-founder; Anand Prakash, co-founder; and Pulkit Jain, co-founder and head of product

In recent years, a wave of tech startups including Byju’s, which was valued at $8 billion in its most recent fund raise last week, have emerged to tackle these challenges as low-cost Android handsets flood the Indian market and mobile data prices become incredibly affordable.

Vedantu allows students to interact with their teachers through the microphone and camera on their smartphone or desktop and also through a chat box on the app. These teachers also have assistants who work with students.

Since it’s a virtual class, Vedantu is also able to accommodate more students in a session. A paid session may have as many as 600 students while the free lessons could have 2,000, said Krishna, who is a teacher himself. Until early 2014, he  also ran Lakshya Institute, which helped students prepare for undergraduate-level courses, before selling a majority stake to Mumbai-based K-12 tutoring and test preparation firm MT Educare.

Running a tech platform has also enabled Vedantu to offer its subscription service at a more affordable price than a typical offline coaching equivalent that can cost users anything between a few hundred dollars to a few thousand.

To ensure that students are paying attention and identify their weaknesses, Vedantu says it has built a patented system called WAVE that evaluates about 70 parameters, including whether the student is looking at the screen. More than 90 percent of its students engage with the session, said Krishna.

Hans Tung, Managing Partner at GGV Capital, who is joining the board of Vedantu as part of the investment, said he thinks Vedantu has reached the inflection point with its WAVE product. WAVE enables teachers to deliver “superior results as it can offer personalized education to many students at once,” he said. “We are excited to partner with Vamsi and the Vedantu team and share GGV’s global expertise and network to help them scale and shape learning outcomes for millions of students in India and beyond.”

Krishna said the startup has grown phenomenally in recent years, so it is beginning to spend some money to better market its brand. In December, the startup ran some commercials on TV channels. In addition to that, Vedantu has also started to add courses to serve even younger students. The new courses are in pilot stage and would be broadly launched in a few months, he said.