Instagram will now show you who you interact with least frequently in case you want to unfollow them. In an effort to help you keep your feed clean and relevant, today Instagram is launching “following categories” that divides the list of who you follow into batches, including “most seen in feed” and “least interacted with.” That way if someone annoying or boring is overwhelming your feed, or there’s someone whose content you’ve proven to not be interested in, you can easily remove them. Time to axe those courtesy and pity follows. 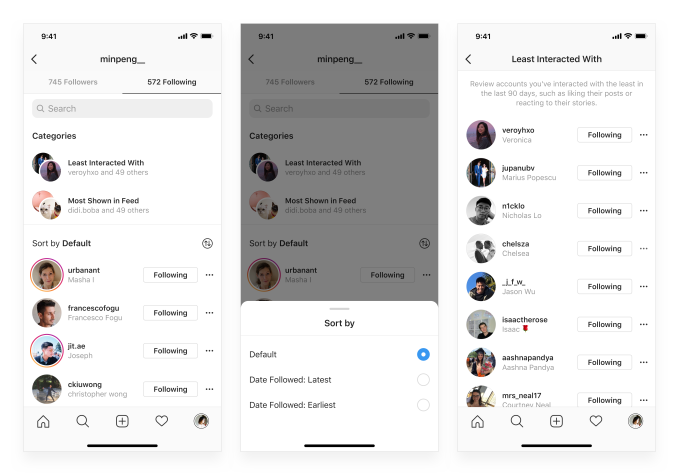 “Instagram is really about bringing you closer to the people and things you care about — but we know that over time, your interests and relationships can evolve and change,” a spokesperson tells me. “Whether you graduate, move to a new city, or become obsessed with a new interest and find a community, we want to make it easier to manage the accounts you follow on Instagram so that they best represent your current connections and interests.”

To access the feature, go to your profile, then “following,” then you’ll see the categories you can explore. You’re also able to sort who you follow by earliest to latest and vice versa, in case you want to clear out your earliest adds or make sure you actually care about the latest people you followed.

By increasing the density of high-quality posts in your feed and Stories by getting you to unfollow irrelevant accounts, Instagram could boost ad views. You’ll come across fewer lame posts that might make you close the app so you instead keep scrolling and fast-forwarding while racking up ad impressions. Instagram reportedly hit $20 billion in 2019 revenue according to Bloomberg, and soon it may start running ads in IGTV while splitting revenue with creators.

I’ve been asking Twitter to build unfollow suggestions since 2013, but Instagram beat them to it. Even with filtered feeds, the algorithms can get things wrong and show too much of people you don’t care about.

Following back or adding someone who asks has become part of the modern-day social contract. It can be rude and cause drama to refuse, so people just bloat their following list. Manually sorting through, trying to remember who people are and if you see them too often or constantly ignore them can be a slow and emotionally draining chore. With Instagram now 10 years old, Twitter 14 and Facebook 16, we’ve had a long time to accidentally screw up our social graph.

Perhaps unfollow suggestions took this long because no app wants to overtly shame specific people. But Instagram’s approach via clear, quantifiable categories is just vague enough that you probably won’t screenshot them and show the friends it said to nix. With that sensitivity, Instagram has pulled off the rare feat of improving the user experience while simultaneously benefiting its revenue engine.