Try as they might, even the most advanced roboticists on Earth struggle to recreate the effortless elegance and efficiency with which birds fly through the air. The “PigeonBot” from Stanford researchers takes a step toward changing that by investigating and demonstrating the unique qualities of feathered flight.

On a superficial level, PigeonBot looks a bit, shall we say, like a school project. But a lot of thought went into this rather haphazard-looking contraption. Turns out the way birds fly is really not very well understood, as the relationship between the dynamic wing shape and positions of individual feathers are super complex.

Mechanical engineering professor David Lentink challenged some of his graduate students to “dissect the biomechanics of the avian wing morphing mechanism and embody these insights in a morphing biohybrid robot that features real flight feathers,” taking as their model the common pigeon — the resilience of which Lentink admires.

As he explains in an interview with the journal Science:

The first Ph.D.student, Amanda Stowers, analyzed the skeletal motion and determined we only needed to emulate the wrist and finger motion in our robot to actuate all 20 primary and 20 secondary flight feathers. The second student, Laura Matloff,uncovered how the feathers moved via a simple linear response to skeletal movement. The robotic insight here is that a bird wing is a gigantic underactuated system in which a bird doesn’t have to constantly actuate each feather individually. Instead, all the feathers follow wrist and finger motion automatically via the elastic ligament that connects the feathers to the skeleton. It’s an ingenious system that greatly simplifies feather position control.

In addition to finding that the individual control of feathers is more automatic than manual, the team found that tiny microstructures on the feathers form a sort of one-way Velcro-type material that keeps them forming a continuous surface rather than a bunch of disconnected ones. These and other findings were published in Science, while the robot itself, devised by “the third student,” Eric Chang, is described in Science Robotics.

Using 40 actual pigeon feathers and a super-light frame, Chang and the team made a simple flying machine that doesn’t derive lift from its feathers — it has a propeller on the front — but uses them to steer and maneuver using the same type of flexion and morphing as the birds themselves do when gliding.

Studying the biology of the wing itself, then observing and adjusting the PigeonBot systems, the team found that the bird (and bot) used its “wrist” when the wing was partly retracted, and “fingers” when extended, to control flight. But it’s done in a highly elegant fashion that minimizes the thought and the mechanisms required. 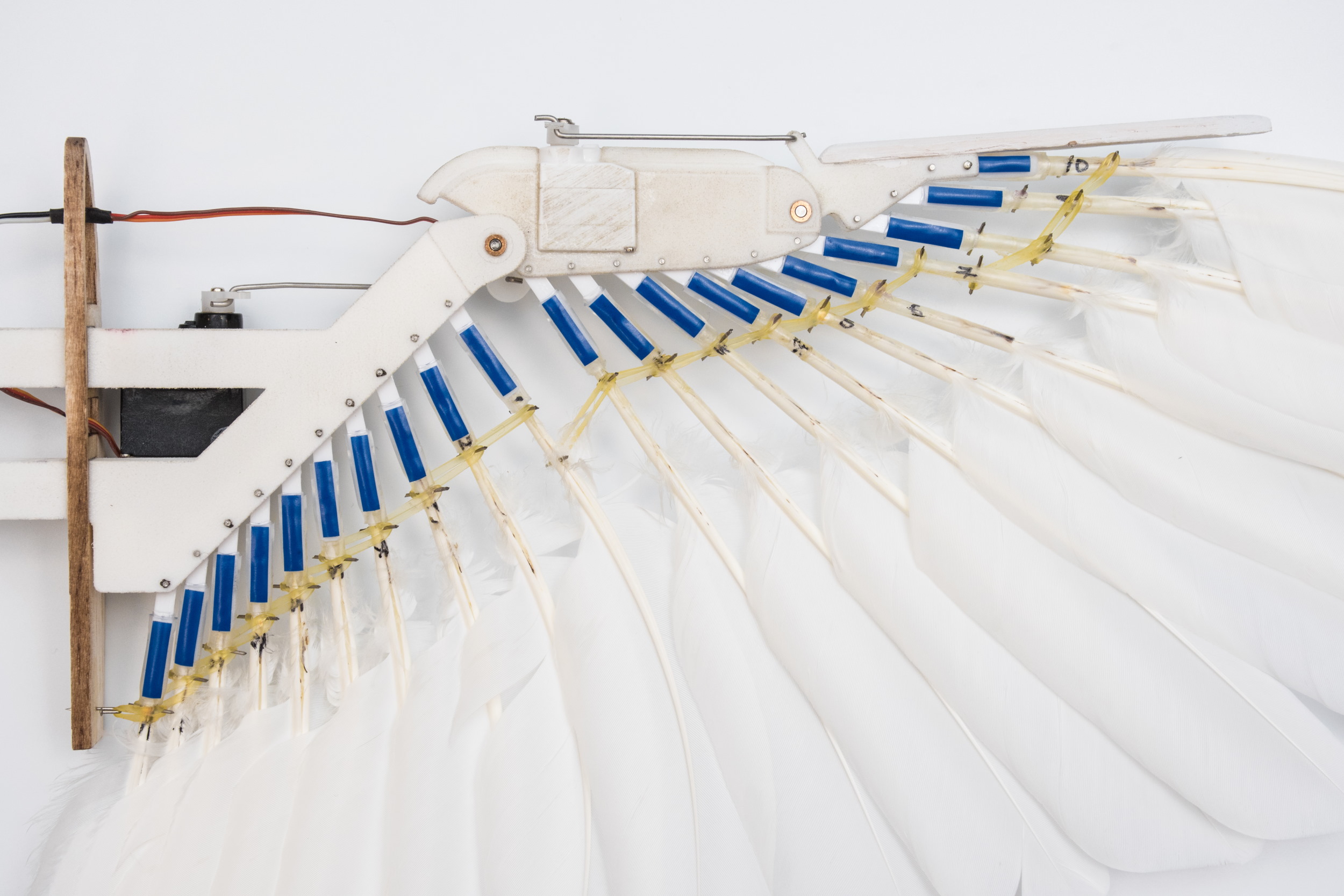 PigeonBot’s wing. You can see that the feathers are joined by elastic connections so moving one moves others.

It’s the kind of thing that could inform improved wing design for aircraft, which currently rely in many ways on principles established more than a century ago. Passenger jets, of course, don’t need to dive or roll on short notice, but drones and other small craft might find the ability extremely useful.

“The underactuated morphing wing principles presented here may inspire more economical and simpler morphing wing designs for aircraft and robots with more degrees of freedom than previously considered,” write the researchers in the Science Robotics paper.

Up next for the team is observation of more bird species to see if these techniques are shared with others. Lentink is working on a tail to match the wings, and separately on a new bio-inspired robot inspired by falcons, which could potentially have legs and claws as well. “I have many ideas,” he admitted.

Bat Bot is the biomimetic flying soft robot we deserve