India welcomed Jeff Bezos this week with an antitrust probe. On top of that, thousands of small merchants who typically compete with one another are beginning to gather across the country to hold a protest against the alleged predatory practices by the e-commerce giant. But Amazon founder and chief executive’s love for one of the company’s most important overseas markets remains untainted.

At a conference in New Delhi on Wednesday, Bezos and Amit Agarwal, the head of Amazon India, announced that the American giant is pumping $1 billion into India operations to help small and medium-sized businesses in the country come online. This is in addition to about $5.5 billion the company has previously invested in the country.

Bezos said that Amazon is also eyeing making exports of locally produced goods from India — in line with New Delhi’s Make in India program that encourages companies to manufacture locally in the nation — to be of $10 billion in size on Amazon platform by 2025.

“Over the next five years, Amazon will invest an incremental $1 billion to digitize micro and small businesses in cities, towns, and villages across India, helping them reach more customers than ever before,” said Bezos in a statement.

“This initiative will use Amazon’s global footprint to create $10 billion in India exports by 2025. Our hope is that this investment will bring millions more people into the future prosperity of India and at the same time expose the world to the ‘Make in India’ products that represent India’s rich, diverse culture,” he added.

Nearly half a billion people in India came online for the first time in the last decade. But most small businesses such as mom-and-pop stores that dot tens of thousands of cities, towns, and villages of India are still offline. Google, Facebook, and Microsoft have also launched tools in recent years to help these businesses build presence on the web and accept digital payments.

Amazon opened its conference, titled Amazon SMBhav (Hindi for possible), with videos of poor merchants and craftsmen in India who have expanded their businesses after signing up on the e-commerce platform.

An Amazon executive said the company has amassed over 500,000 sellers in India and thousands of merchants have boosted their business by beginning to sell on 12 Amazon marketplaces across the globe.

But just 10 miles from the conference venue, dozens of merchants had a different Amazon story to tell. 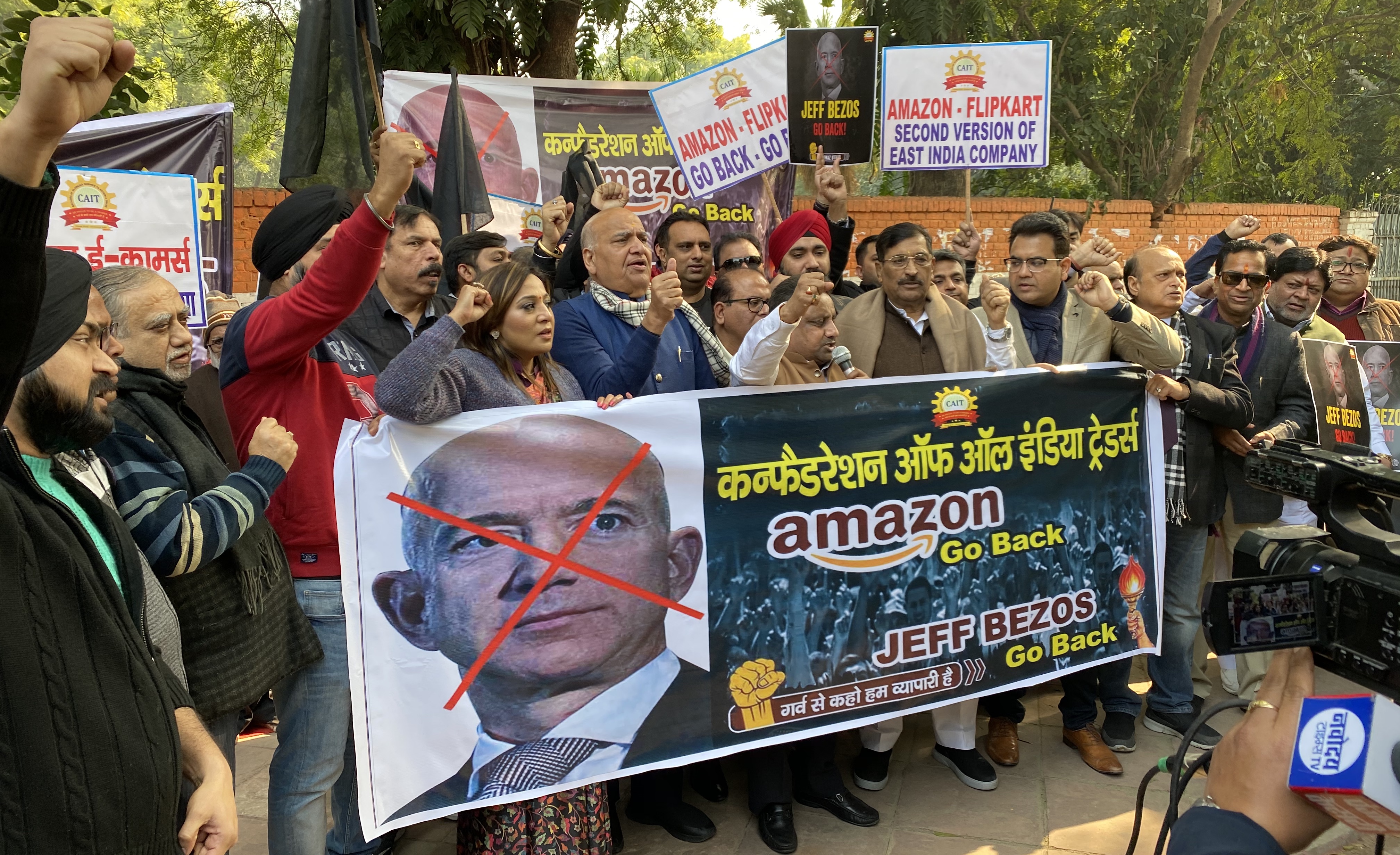 Confederation of All India Traders (CAIT), a trade group that represents more than 60 million merchants in the country, said it was organizing protests in 300 cities in India. A representative of the trade group said they want to publicize the alleged predatory pricing and other anti-competitive practices employed by Amazon and Flipkart .

Bezos and Agarwal did not address the protests or the antitrust probe.

At stake is one of the world’s largest untapped markets. India’s e-commerce market is projected to grow to $150 billion in the next three years, according to a report by Nasscom and PwC India.

On Monday, India’s Competition Commission opened an antitrust probe into Amazon and Walmart -owned Flipkart to find whether the two e-commerce giants have exclusive arrangements with smartphone vendors and are giving preferential treatment to some sellers.

The probe is the latest regulatory setback for Amazon and Flipkart, which sold majority stake to Walmart for $16 billion in 2018, in India. Last year, U.S. senators criticized New Delhi after it restricted foreign companies from selling inventory from their own subsidiaries. The move forced Amazon and Flipkart to abruptly pull hundreds of thousands of goods from their marketplaces.

A CAIT spokesperson told TechCrunch that its member merchants were pleased with India’s antitrust watchdog’s move. The new round of protests today are one of several the trade group has organized in recent years. Last month, thousands of protestors expressed similar concerns against the e-commerce players.

“Amazon, Jeff Bezos, Flipkart, go back!” some protesters chanted today. Sumit Agarwal, National Secretary of CAIT, told TechCrunch in an interview that “deep discounting” on products on Amazon is impeding the growth of small merchants and a government intervention is urgently needed.

According to industry estimates, e-commerce accounts for about 3% of retail sales in the country.