What if politicians could only display Twitter replies from their supporters while stopping everyone else from adding their analysis to the conversation? That’s the risk of Twitter’s upcoming Conversation Participants tool it’s about to start testing that lets you choose if you want replies from everyone, only those your follow or mention or no one.

For most, the reply limiter could help repel trolls and harassment. Unfortunately, it still puts the burden of safety on the victims rather than the villains. Instead of routing out abusers, Twitter wants us to retreat and wall off our tweets from everyone we don’t know. That could reduce the spontaneous yet civil reply chains between strangers that are part of what makes Twitter so powerful.

But in the hands of politicians hoping to avoid scrutiny, the tools could make it appear that their tweets and policies are uniformly supported. By only allowing their sycophants to add replies below their posts, anyone reading along will be exposed to a uniformity of opinion that clashes with Twitter’s position as a marketplace of ideas.

We’ve reached out to Twitter for comment on this issue and whether anyone such as politicians would be prevented from using the new reply-limiting tools. Twitter plans to test the reply-selection tool in Q1, monitor usage, and make modifications if necessary before rolling it out. The company provided this statement:

“We want to help people feel safe participating in the conversation on Twitter by giving them more control over the conversations they start. We’ll be experimenting with different options for who can reply to Tweets in early 2020.” 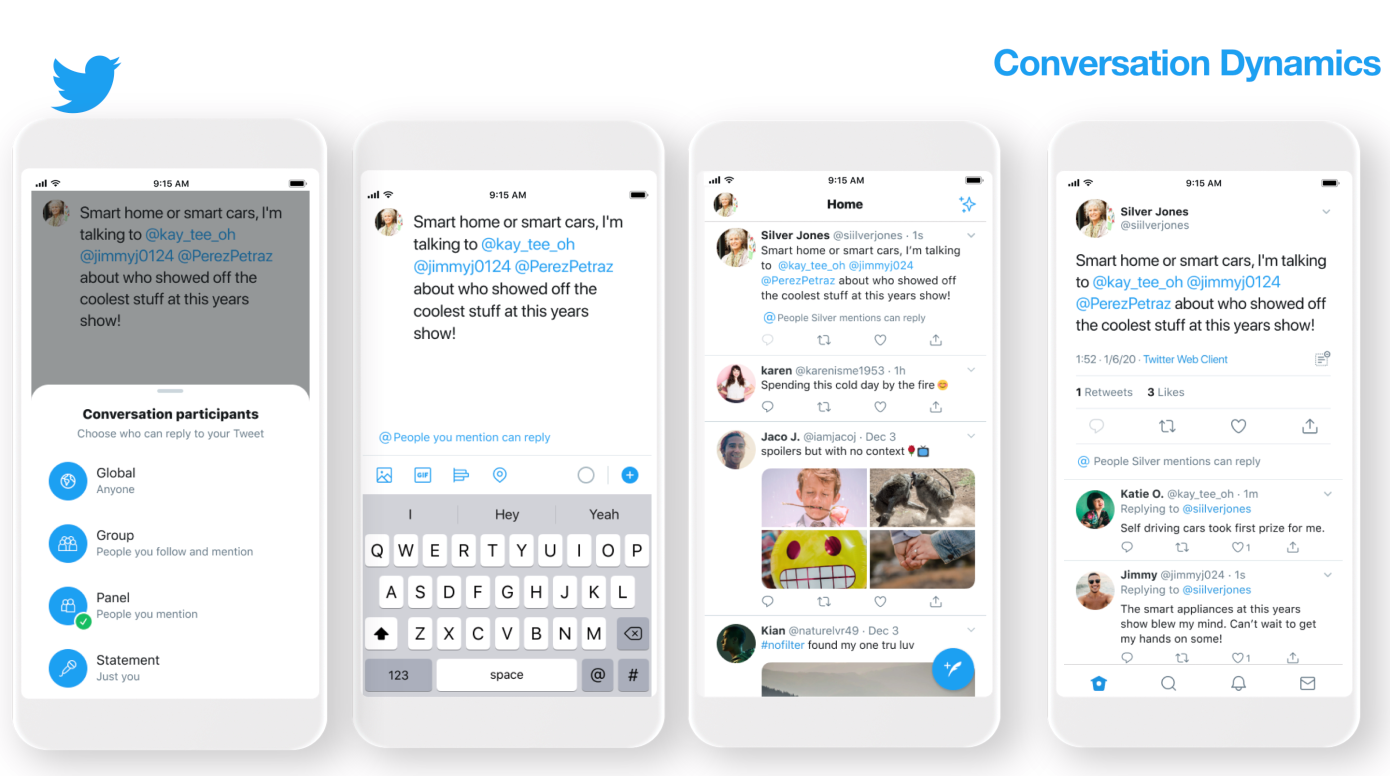 Here’s how the new Conversation Participants feature works, according to the preview shared by Twitter’s Suzanne Xie at CES today, though it could change during testing. When users go to tweet, they’ll have the option of selecting who can reply, unlike now when everyone can leave replies but authors can hide certain ones that viewers can opt to reveal. Conversation Participants offers four options:

–Global: Replies from anyone

–Panel: Replies from only those you mention in this tweet

Now imagine President Trump opts to make all of his tweets Group-only. Only those who support him and he therefore follows — like his sons, Fox News’ Sean Hannity and his campaign team — could reply. Gone would be the reels of critics fact-checking his statements or arguing against his policies. His tweets would be safeguarded from reproach, establishing an echo chamber filter bubble for his acolytes.

It’s true that some of these responses from the public might constitute abuse or harassment. But those should be dealt with specifically through strong policy and consistent enforcement of adequate punishments when rules are broken. By instead focusing on stopping replies from huge swaths of the community, the secondary effects have the potential to prop up politicians that consistently lie and undam the flow of misinformation.

There’s also the practical matter that this won’t stop abuse, it will merely move it. Civil discussion will be harder to find for the rest of the public, but harassers will still reach their targets. Users blocked from replying to specific tweets can just tweet directly at the author. They can also continue to mention the author separately or screenshot their tweets and then discuss them.

It’s possible that U.S. law prevents politicians discriminating against citizens with different viewpoints by restricting their access to the politician’s comments on a public forum. Judges ruled this makes it illegal for Trump to block people on social media. But with this new tool, because anyone could still see the tweets, reply to the author separately and not be followed by the author likely doesn’t count as discrimination like blocking does, use of the Conversation Participants tool could be permissible. Someone could sue to push the issue to the courts, though, and judges might be wise to deem this unconstitutional.

Again, this is why Twitter needs to refocus on cleaning up its community rather than only letting people build tiny, temporary shelters from the abuse. It could consider blocking replies and mentions from brand new accounts without sufficient engagement or a linked phone number, as I suggested in 2017. It could also create a new mid-point punishment of a “time-out” from sending replies for harassment that it (sometimes questionably) deems below the threshold of an account suspension.

The combination of Twitter’s decade of weakness in the face of trolls with a new political landscape of normalized misinformation threaten to overwhelm its attempts to get a handle on safety.