Impossible Foods made huge waves in the food industry when it came up with a way of isolating and using “heme” molecules from plants to mimic the blood found in animal meat (also comprised of heme), bringing a new depth of flavor to its vegetarian burger.

This week at CES, the company is presenting the next act in its mission to get the average consumer to switch to more sustainable, plant-based proteins: it unveiled its version of pork — specifically ground pork, which will be sold as a basic building block for cooking as well as in sausage form. It’s a critical step, given that pork is the most-eaten animal product in the world.

Impossible has set up shop in CES’s outdoor area, situated near a line of food trucks, and it will be cooking food for whoever wants to come by. (I tasted a selection of items made from the new product — a steamed bun, a meatball, some noodles and a lettuce wrap — and the resemblance is uncanny, and not bad at all.) And after today, the new product will be making its way to select Burger King restaurants in the U.S. before appearing elsewhere.

It may sound a little far-fetched to see a food startup exhibiting and launching new products at a consumer electronics show, attended by 200,000 visitors who will likely be outnumbered by the number of TVs, computers, phones and other electronic devices on display. Indeed, Impossible is the only food exhibitor this year. 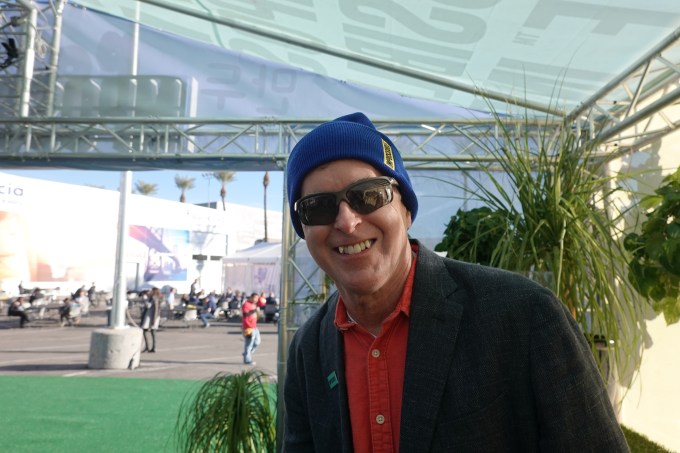 But if you ask Pat Brown, the CEO and founder of Impossible Foods (pictured right, at the sunny CES stand in the cold wearing a hat), the company is in precisely the right place.

“To me it’s very natural to be at CES,” he said in an interview this week at the show. “The food system is the most important technology on earth. It is absolutely a technology, and an incredibly important one, even if it doesn’t get recognised as such. The use of animals as a food technology is the most destructive on earth. And when Impossible was founded, it was to address that issue. We recognised it as a technology problem.”

That is also how Impossible has positioned itself as a startup. Its emergence (it was founded 2011) dovetailed with an interesting shift in the world of tech. The number of startups were booming, fueled by VC money and a boom in smartphones and broadband. At the same time, we were starting to see a new kind of startup emerging built on technology but disrupting a wide range of areas not traditionally associated with technology. Technology VCs, looking for more opportunities (and needing to invest increasingly larger funds), were opening themselves up to consider more of the latter opportunities.

Impossible has seized the moment. It has raised around $777 million to date from a list of investors more commonly associated with tech companies — they include Khosla, Temasek, Horizons Ventures, GV and a host of celebrities — and Impossible is now estimated to be valued at around $4 billion. Brown told me it is currently more than doubling revenues annually.

With his roots in academia, the idea of Brown (who has also done groundbreaking work in HIV research) founding and running a business is perhaps as left-field a development as a food company making the leap from commodity or packaged goods business to tech. Before Impossible, Brown said that he had “zero interest” in becoming an entrepreneur: the bug that has bitten so many others at Stanford (where he was working prior to founding Impossible) had not bitten him.

“I had an awesome job where I followed my curiosity, working on problems that I found interesting and important with great colleagues,” he said.

That changed when he began to realise the scale of the problem resulting from the meat industry, which has led to a well-catalogued list of health, economic and environmental impacts (including increased greenhouse gas emissions and the removal of natural ecosystems to make way for farming land. “It is the most important and consequential issue for the future of the world, and so the solution has to be market-based,” he said. “The only way we can replace themes that are this destructive is by coming up with a better technology and competing.”

Pork is a necessary step in that strategy to compete. America, it seems, is all about beef and chicken when it comes to eating animals. But pigs and pork take the cake when you consider meat consumption globally, accounting for 38% of all meat production, with 47 pigs killed on average every second of every day. Asia, and specifically China, figure strongly in that demand. Consumption of pork in China has increased 140% since 1990, Impossible notes.

Pigs’ collective footprint in the world is also huge: there are 1.44 billion of them, and their collective biomass totals 175 billion kg, twice as much as the biomass of all wild terrestrial vertebrates, Impossible says.

Whether Impossible’s version of pork will be enough or just an incremental step is another question. Ground meat is not the same as creating structured proteins that mimic the whole-cuts that are common (probably more common) when it comes to how pork is typically cooked (ditto for chicken and beef and other meats).

That might likely require more capital and time to develop.

For now, Impossible is focused on building out its business on its own steam: It’s not entertaining any thoughts of selling up, or even of licensing out its IP for isolating and using soy leghemoglobin — the essential “blood” that sets its veggie proteins apart from other things on the market. (I think of licensing out that IP as the equivalent of how a tech company might white label or create APIs for third parties to integrate its cool stuff into their services.)

That means there will be inevitable questions down the line about how Impossible will capitalise to meet demand for its products. Brown said that for now there are no plans for IPOs or to raise more externally, but pointed out that it would have no problem doing either.

Indeed, the company has built up an impressive bench of executives and other talent to meet those future scenarios. Earlier this year, Impossible hired Dennis Woodside — the former Dropbox, Google and Motorola star– as its first president. And its CFO, David Lee, joined from Zynga back in 2015, with a stint also in the mass-market food industry, having been at Del Monte prior to that.

Lee told me that the company has essentially been running itself as a public company internally in preparation for a time when it might follow in the footsteps of its biggest competitor, Beyond Meat, and go public.

“From a tech standpoint I’m absolutely confident that we can outperform what we get from animals in affordability, nutrition and deliciousness,” said Brown. “This entire industry is most destructive by far and has major responsibility in terms of climate and biodiversity, but it is going to be history and we are going to replace it.”