At its annual Dreamforce mega-conference in San Francisco, Salesforce today introduced the next steps in its Einstein Voice project, which it first announced last year. Einstein Voice is the company’s AI voice assistant. You can think of it as Salesforce’s Alexa or Google Assistant, but with a more focused mission.

During a briefing ahead of the event, Salesforce Chief Product Officer Bret Taylor showed off an Einstein and Alexa enabled Einstein speaker (Salesforce chairman and co-CEO Marc Benioff was supposed to be at the meeting, too, but for unknown reasons, he didn’t show) — and yes, it looked like Salesforce’s Einstein cartoon figure and its voluminous white hair lit up when it responded to queries. The company isn’t planning on making these devices available to the public, but it does show off the work the company has done with Amazon to integrate the service (though is by no means an Amazon -exclusive since the company is also working to bring Einstein to Google devices). 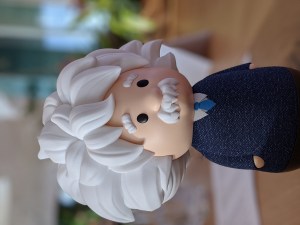 The theory here, as Taylor explained, is that having access to Salesforce data through voice will enable salespeople to quickly enter data into Salesforce when they are on the go and to ask the system questions about their data. The company argues that while voice assistants have found a place in the home, there are a lot of upsides to bringing it to businesses as well. That means a system has to account for the security needs of enterprises, too, as well as the fact that there is a wide range of different user personas it has to account for.

“We’re really excited about the idea of voice in businesses — the idea that every business can have an AI guide to their business decisions,” Taylor said. “I view it as part of this progression of technology. Computers and software started in the terminal with a keyboard, thanks to Xerox Parc moved to a mouse and graphic user interface, and then thanks to Steve Jobs, moved to a touchscreen, which I think is probably the dominant form factor for computers nowadays. And voice is really that next step.”

This next step, Taylor argues, will allow companies to rethink how people interact with software and data. With voice, Einstein, which is Salesforce’s catch-all name for its AI products, has a “seat at the table,” he noted because you can simply as the system a question if you need additional data during a conversation. But the real mission here is to bring these tools to every business — not just to Salesforce’s executive meetings.

To enable this, Salesforce is launching a tool that will allow anybody within a company to quickly build basic Einstein skills to pull up data from Salesforce. These skills focus on data input and relatively basic queries, for now. During a demo ahead of the event, the team showed off how easy it would be to enable a manager to ask about the current sales performance of his team, for example. By now means, though, is this tool as rich as products like Google’s DialogFlow or Microsoft’s Azure Bot Service. It’s nowhere near as flexible yet, but the team notes that it’s still early days and that it is working on enabling the ability to have more complex dialogs with Einstein in the future, for example.

To be honest, it’s hard not to look at this as a bit of a gimmick. There are probably real use cases here, that every company will have to define for itself. Maybe there are salespeople who indeed want to use a voice interface to update their CRM system after a customer meeting, for example. Or they may want to ask about the value of an account while they are in the car. In many ways, though, this feels like a technology looking for a problem, despite Salesforce’s protestations that customers are asking for this.

Some of the other uses cases here, which the company didn’t really highlight all that much in its briefing, seem far more compelling. It’s using Einstein Voice to coach call center agents by analyzing calls to pull out insights and trends from sales call transcripts. It’s also launching Service Cloud Voice, which integrates telephony inside the company’s Service Cloud. Using a built-in transcription service, Einstein can listen to the call in real time and proactively provide sales teams and call center agents with relevant information. Those use cases may not be quite as exciting, but in the end, they may generate for more value for companies than having yet another voice assistant for which they have to build their own skills, using what is, at least for the time being, a rather limited tool.