Clumio, a 100-people startup that offers a SaaS-like service for enterprise backup, today announced that it has raised a $135 million Series C round, led by existing investor Sutter Hill Ventures and new investor Altimeter Captial. The announcement comes shortly after the company’s disclosure in August that it had quietly raised a total of $51 million in Series A and B rounds in 2017 and 2018. The company says it plans to use this new funding to “accelerate its vision to deliver a globally consolidated data protection service in and for the public cloud.”

Given the amount of money invested in the company, chances are Clumio is getting close to a $1 billion valuation, but the company is not disclosing its valuation at this point.

The overall mission of Clumio is to build a platform on public clouds that gives enterprises a single data protection service that can handle backups of their data in on-premises, cloud and SaaS applications. When it came out of stealth, the company’s focus was on VMware on premises. Since then, the team has expanded this to include VMware running on public clouds. 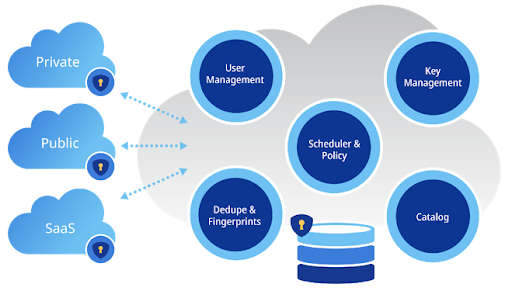 “When somebody moves to the cloud, they don’t want to be in the business of managing software or infrastructure and all that, because the whole reason to move to the cloud was essentially to get away from the mundane,” explained Clumio CEO and co-founder Poojan Kumar.

The next step in this process, as the company also announced today, is to make it easier for enterprises to protect the cloud-native applications they are building now. The company today launched this service for AWS and will likely expand it to other clouds like Microsoft Azure, soon.

The market for enterprise backup is only going to expand in the coming years. We’ve now reached a point, after all, where it’s not unheard of to talk about enterprises that run thousands of different applications. For them, Clumio wants to become the one-stop-shop for all things data protection — and its investors are obviously buying into the company’s vision and momentum.

“When there’s a foundational change, like the move to the cloud, which is as foundational a change, at least, as the move from mainframe to open systems in the 80s and 90s,” said Mike Speiser, Managing Director at Sutter Hill Ventures. “When there’s a change like that, you have to re-envision, you have to refactor and think of the world — the new world — in a new way and start from scratch. If you don’t, what’s gonna end up happening is people make decisions that are short term decisions that seem like they will work but end up being architectural dead ends. And those companies never ever end up winning. They just never end up winning and that’s the opportunity right now on this big transition across many markets, including the backup market for Clumio.”

Speiser also noted that SaaS allows for a dramatically larger market opportunity for companies like Clumio. “What SaaS is doing, is it’s not only allowing us to go after the traditional Silicon Valley, high end, direct selling, expensive markets that were previously buying high-end systems and data centers. But what we’re seeing — and we’re seeing this with Snowflake and […] we will see it with Clumio — is there’s an opportunity to go after a much broader market opportunity.”

Starting next year, Clumio will expand that market by adding support for data protection for a first SaaS app, with more to follow, as well as support for backup in more regions and clouds. Right now, the service’s public cloud tool focuses on AWS — and only in the United States. Next year, it plans to support international regions as well.

Kumar stressed that he wants to build Clumio for the long run, with an IPO as part of that roadmap. His investors probably wouldn’t mind that, either.