Apple announced this morning a significant $2.5 billion commitment toward easing the California housing availability and affordability crisis. The investment includes a $1 billion commitment to an affordable housing investment fund, $1 billion toward a first-time homebuyer mortgage assistance fund and $300 million in Apple-owned land, which will be made available for affordable housing.

Another $200 million will go to support new, lower-income housing in the Bay Area, including by way of a $150 million Bay Area housing fund, with partners like Housing Trust Silicon Valley. This will consist of long-term forgivable loans and grants. Another $50 million will be directed toward vulnerable populations, specifically to address homelessness in the Silicon Valley area.

Apple says it also will look into similar efforts across both Northern and Southern California that are designed to prevent homelessness.

The company says the full commitment in the state — which is being done in partnership with Governor Gavin Newsom, the state of California and community-based organizations — will take approximately two years to be fully utilized, and will depend on the availability of projects. The capital returned to Apple will also be reinvested in future projects over the next five years.

The investment comes at a time when the housing crunch in California has forced people from their homes, Apple explained in its announcement. 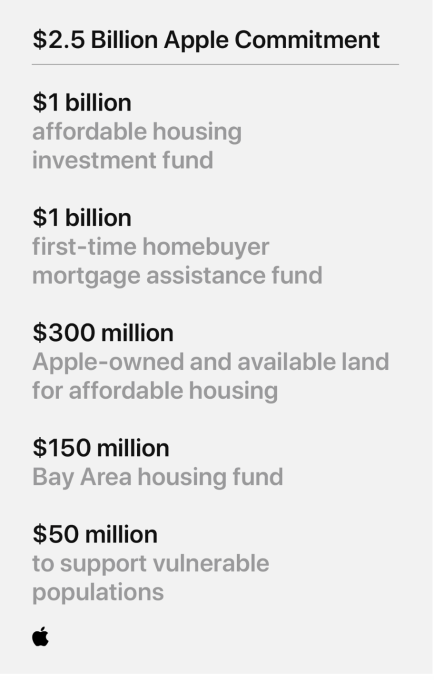 “Community members like teachers, firefighters, first responders and service workers are increasingly having to make the difficult choice to leave behind the community they have long called home. Nearly 30,000 people left San Francisco between April and June of this year and homeownership in the Bay Area is at a seven-year low,” Apple said.

The housing crisis didn’t develop overnight, nor is the tech industry’s growth the only reason there’s now an issue.

Like most complexities, the crisis arose from a combination of factors, including also the area’s local laws, zoning regulations, protests against building vertically, NIMBY-ism, rental control’s impact on the market, the restricted housing supply and much more.  But tech has played a big role here, having led to a disparity between the wealthy tech workers and everyone else, as well as contributing to rapid population growth that’s outpaced the growth in the housing supply.

Today, many area residents can’t afford to live in the cities where they work, commuting an hour or more from more affordable neighborhoods.

“Before the world knew the name Silicon Valley, and long before we carried technology in our pockets, Apple called this region home, and we feel a profound civic responsibility to ensure it remains a vibrant place where people can live, have a family and contribute to the community,” said Tim Cook, Apple’s CEO, in a statement. “Affordable housing means stability and dignity, opportunity and pride. When these things fall out of reach for too many, we know the course we are on is unsustainable, and Apple is committed to being part of the solution.”

The fact that the tech giants have to step in to address the problems — which do, in fact, impact their own businesses as they need to be able to hire more than just the high-paid engineers — is concerning. While some would applaud the sizable investments as proof of tech’s ability to be a good neighbor to their local communities, others would say we should just be taxing these companies more so the money is available to solve the problems upfront — instead of it going into loans that actually earn these companies more. Nor should they be invested into million or billion-dollar programs that give these tech companies an incredible amount of influence in local politics. (Update: This is Bernie Sanders’ position on the matter: that Apple and other large companies should just pay their fair share, instead of housing profits offshore.)

But it also could be that the crisis has gotten so out of control, it can no longer be solved at the local level.

“This unparalleled financial commitment to affordable housing, and the innovative strategies at the heart of this initiative, are proof that Apple is serious about solving this issue. I hope other companies follow their lead,” said Newsom. “The sky-high cost of housing — both for homeowners and renters — is the defining quality-of-life concern for millions of families across this state, one that can only be fixed by building more housing. This partnership with Apple will allow the state of California to do just that.”