Slowly but surely, smart speakers are taking over. As Amazon builds Alexa into everything from tiny clocks to microwaves and Google wraps Assistant into just about anything it can, it feels like it’ll be no time before the rooms that don’t have some sort of voice-powered device are the exception.

But most people and businesses probably have no idea how to get their content prepped and ready to play friendly with these speakers. That’s the driving force behind Soundcheck, a company opening its doors this morning.

Soundcheck helps to take your content and package it in a format these smart speakers and voice assistant devices more readily understand.

Soundcheck’s primary focus initially is on WordPress-powered sites — not a small target, considering that estimates suggest WordPress powers over 30% of the internet. They’ve built a plugin that lets you take information on your WordPress site and, in a tap or two, wrap up the most important pieces in Google’s “speakable” data format — effectively acting as a highlighter, saying, “Hey voice speakers and the search algorithms that power them! This bit of information is meant for you, and answers that question about Topic X.” 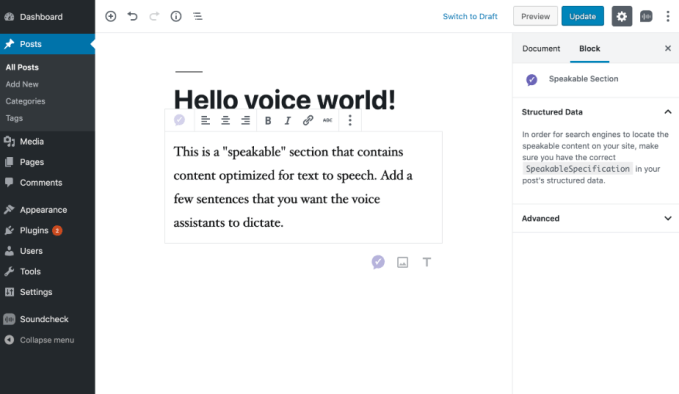 Getting data into this format usually means writing custom markup for each page in question, which is something that not everyone (like, say, a small business owner using WordPress mostly for the whole simplified WYSIWYG aspect) is prepped to do. Soundcheck boils down the process to a button press, handles the data validation and provides a preview of how that content might sound when read aloud by a voice assistant.

Soundcheck will be free for users who just want the basic plugin, with support for their 50 latest WordPress posts. If you need support for more posts, or you want to do fancier things like custom API integrations and tying into dedicated Amazon Alexa/Google Assistant apps, they’ll charge somewhere between $20-$79 a month. The company tells me it’s also building out an analytics tool to help publishers better understand where and when its data is being accessed by voice. They also say that support for other content platforms beyond WordPress is on the roadmap.

Soundcheck was founded by Daniel Tyreus and Narendra Rocherolle — the latter of whom also co-founded Webshots, the ultra early photo sharing site that sold to Excite@Home for $82.5 million in 1999. The duo originally set out to build Peck, a service founded in 2016 that aimed to figure out the best way to pull in information on a subject and pack it down into its most concise form. They found that one of the toughest parts of that equation was getting data packaged up and ready for smart speakers like Alexa and Google Home — so they pivoted to focus on that.

The team has raised $1.5 million to date, backed by True Ventures, Resolute Ventures, Twitter co-founder Biz Stone and Flickr co-founder Caterina Fake — along with Automattic, the very team behind WordPress.