In a move to boost family subscriptions to its app, Spotify this morning announced the launch of a dedicated Kids application which allows children three and up to listen to their own music, both online and offline, as well as explore playlists and recommendations picked by experts, and more. The music selection is also filtered so songs won’t have explicit content.

The launch is a first in the online music streaming space, where kids on parents’ music plans typically sign in through the same app — just with a different login. But Spotify believes children deserve their own space, where the music they listen to is available in an ad-free environment, where they won’t accidentally encounter lyrics that parents disapprove of, and where content is hand-curated by editors.

Spotify Kids, essentially, is a set of hand-picked playlists across categories. 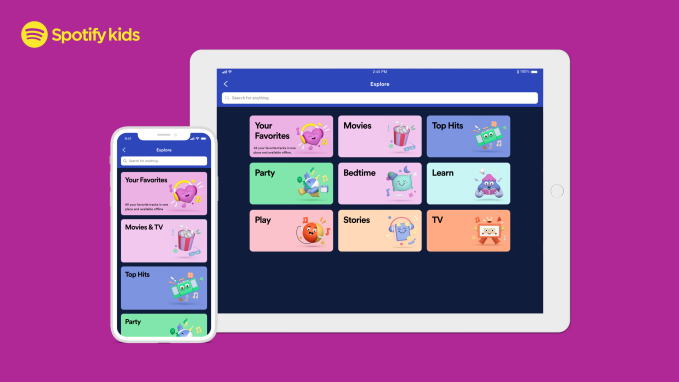 The playlists are all programmed by human editors, not algorithms, and are chosen by way of a set of guidelines about what’s appropriate for children.

The editors, Spotify says, have backgrounds from some of the most well-known brands in the children’s entertainment business, including Nickelodeon, Disney, Discovery Kids, Universal Pictures, Public Service (Sweden), and BookBeat (a family and kids-oriented audio streaming service).

The new app isn’t just for the preschool set. Instead, it can grow with the kids as they get older — but still aren’t ready for the parents’ application yet. 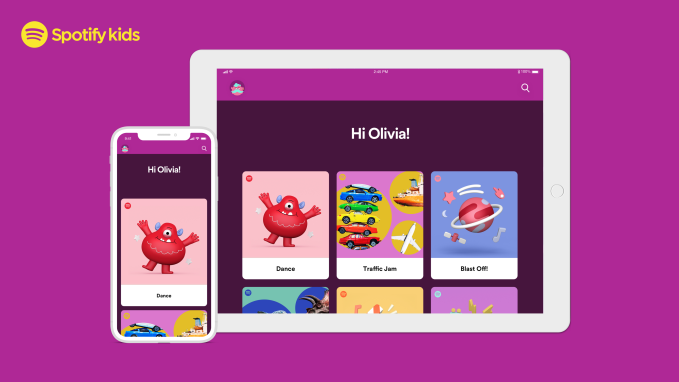 In the younger kids’ version, children can listen to things like singalongs, lullabies, and soundtracks aimed at little kids. Older users have access to tracks and playlists of their own, including some popular tracks, that are appropriate and relevant for their age group. Parents will select their child’s age group upon launch.

In time, Spotify will expand the app with more content — including stories, audiobooks, and podcasts — and build enhanced parental settings and controls that allow parents to customize the Kids app further.

The new app also looks nothing like the main app — it’s colorful and bright, and has a look and feel that varies by the kids’ age group. For example, the younger kids see artwork that’s softer and character-based, while older kids have a more detailed experience.

“Spotify is committed to giving billions of fans the opportunity to enjoy and be inspired by music and stories and we’re proud that this commitment now includes the next generation of audio listeners,” said Spotify’s Chief Premium Business Officer Alex Norström. “We are excited to be expanding the Spotify Premium Family experience with a dedicated app just for our youngest fans. Spotify Kids is a personalized world bursting with sound, shape and color, where our young listeners can begin a lifelong love of music and stories.”

The launch of the Kids app follows Spotify’s surprise earnings success this week, where it beat Wall St. estimates with net income of 241 million euros ($267.34 million), or 36 cents per share. Analysts had expected a loss of 29 cents per share.

The company also added 5 million new subscribers in the quarter to reach 113 million paying premium subscribers — up 26 million from the year-ago quarter.

Today, a Spotify Premium plan costs slightly more than a regular Premium account ($14.99 vs. $9.99 in the U.S., respectively). But many parents often just share their account with the whole family — often ruining their recommendations and special features, like Spotify Wrapped, along the way. A Kids app is a good incentive to convince customers to upgrade, as it’s not only solving those problems but also giving kids a safer, more curated experience within the larger music ecosystem.

There’s another incentive for Spotify to separate out Kids’ listening into its own space: targeted advertising. While the Premium experience has typically been ad-free, a new product lets artists buy a full-screen ad about their new music release and show it to interested users, based on listening history — even if they’re Premium subscribers.

This isn’t the first move Spotify has made in recent months to better cater to families. The company this summer launched a dedicated streaming hub in partnership with Disney, where families could find favorite songs, playlists and soundtracks. It also added parental controls to Premium Family accounts soon after, and launched a special “family mix” with songs everyone can agree on.

Spotify Kids is initially available in beta, while Spotify works to refine the experience based on additional insights gained from use as well as parents‘ feedback. It requires a Premium Family plan to use.

The app is immediately available today in Ireland on iOS and Android, but is rolling out to all markets, the company says.