Reviewing Apple Watch Series 5 is not hard. It is so largely similar to last year’s Series 4. It carries with it all the things that made its predecessor great — the large display, haptics-enhanced Digital Crown and fall detection — and marches forward with one defining feature: the always-on display. Back-to-back years of seminal moments for the Watch is an impressive feat.

From an accessibility perspective, everything that was (and remains) great about Series 4 is there in Series 5. It is the best Apple Watch to date, and it is certainly the most accessible smartwatch on the market, period. But there are a few caveats.

The longer I wear Apple Watch Series 5, a 44mm space-gray aluminum review unit from Apple, the more torn I feel about the device’s always-on display.

The issue is brightness. The always-on display right now isn’t bright enough for me to quickly glance down at my wrist to see the time. As someone who requires maximum brightness on all my devices in order to see well, this is problematic. Other reviewers have mentioned how nice it is to just casually look down at the watch to see the time, as you would on a mechanical watch. My peers must have substantially better eyesight than I do, because I literally cannot do that. In my usage, I have found I’m still flicking my wrist like I have any previous Apple Watch to see the time. When you do so, the Apple Watch’s screen fully illuminates (to max brightness, per my display settings), and that’s how I can tell time.

The whole point of buying Series 5 is for the always-on display. I could turn it off, but that defeats the purpose.

It makes no difference whether I’m using an analog or digital watch face. The exception is when using the new Numerals Duo face with the “filled” styling. The digits are so large that I have no trouble seeing the time. This face would be a good solution for my woes if not for the fact it doesn’t support complications. Otherwise, Numerals Duo is a great workaround for the always-on display’s lack of light.

At a technical level, I understand why watchOS dims the display. Nonetheless, it’s unfortunate there is no way to adjust the brightness while in “always on” mode. Perhaps Apple will add such a feature in the future; it would make sense as an accessibility setting. As it stands today, as good as the always-on display is in general, I can’t say it makes much sense for me. I’m effectively using Series 5 the same way I use my Series 4. Because of this, Series 5 loses some of its appeal. The whole point of buying Series 5 is for the always-on display. I could turn it off, but that defeats the purpose, and I may as well stick with last year’s model.

On the flip side, if and when the always-on display improves for me, another benefit is it will save me from having to raise my arm so often. I wear my watch on my right wrist, which is notable because the right side of my body is partially paralyzed due to cerebral palsy. As such, raising my wrist to tell time or check a notification can sometimes be painful and fatiguing. The always-on display mitigates this because, by virtue of its persistence, you don’t necessarily have to contort your arm to look at your watch — thereby alleviating pain and fatigue for me and others. 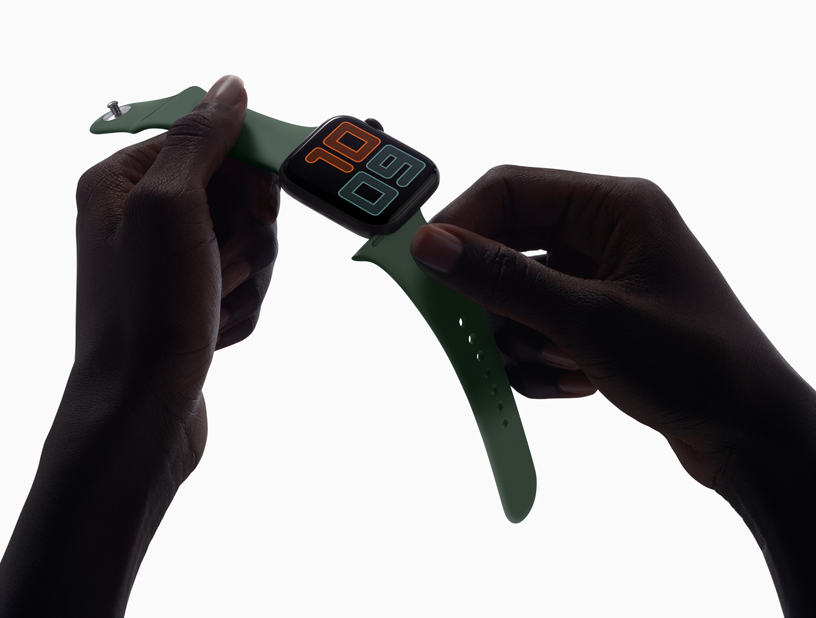 From the original Apple Watch (colloquially known as “Series 0”) through Series 3, Apple packaged the watch as an “all-in-one” product. Which is to say, the band was fastened to the watch. You could grab it and go — take the watch out of the box and immediately see how it looks on you, even before pairing it with your iPhone.

With last year’s Series 4, Apple changed how they package Apple Watch, whereby the band and watch were separate entities. In order to wear it, you first need to attach the band to the watch. In my review, I called out this change as regressive despite recognizing why it made sense operationally. The revised layout continues in Series 5, which is disappointing.

Everything should be as accessible as possible.

The issues this setup raises are the same ones I expounded upon last year. To wit, it’s easy to see how some people could get flustered with the watch and band being piecemeal; it can be challenging in terms of cognitive load and fine-motor skills. Even as a seasoned product reviewer, I freely admit to again feeling a tad disjointed as I was piecing together my review unit.

Like the always-on display’s dimmed state, I totally get why Apple chose to overhaul how they package Apple Watch. It makes complete sense in context of the new Apple Watch Studio, where you can mix and match finishes and bands. This is a prime example of why reporting on accessibility and assistive technology matters so much: esoteric details like how a product is packaged can really matter to a person with disabilities. Part of the reason Apple products are so revered is precisely because of the elegant simplicity of its packaging. The unboxing is supposed to be one of the best parts of a new Apple Watch or iPhone or iMac — especially for disabled people, the initial experience leaves a lasting impression if you have to fiddle as if it were a jigsaw puzzle. I can manage, but many cannot. And it’s important to bear in mind. Everything should be as accessible as possible.

There is no doubt Apple Watch Series 5 is great. It retains the title of Best, Most Accessible Apple Watch Yet, but with an asterisk. I don’t have a burning desire to upgrade — although admittedly, the titanium’s siren song has been calling me ever since last month’s event. The problem I have with the display can be easily remedied with a software update; if Apple shipped a brightness slider tomorrow, I’d order one pronto. Today, though, always-on isn’t always bright — and that sucks.

In the end, I still heartily recommend Apple Watch Series 5 to everyone. My low vision makes the always-on display difficult to see as-is, and I surely can’t be the only one. But that doesn’t take away from the fact that the watch is still the best, most accessible smartwatch by a country mile. I’m confident the always-on display will be iterated and refined over time. In the meantime, Series 4 and watchOS 6 is a pretty bad-ass combination for me.