Instagram is removing its Following tab, a feature that became better known as a stalking tool than one to aid with new account discovery, as the company had intended. Today, Instagram says that its Explore tab is the go-to place to find new people, places and hashtags to follow. Meanwhile, the Following tab is now only used by a small number of people on a regular basis.

Combined, those factors were the key reasons behind its shutdown, we understand.

But the Following tab wasn’t just unhelpful and therefore ignored by Instagram users — a number of people forgot, or never even knew, it existed in the first place. There are numerous stories of people’s illicit or private activities being outed because of what they were liking and following on Instagram.

The tab was fairly notorious for the transparency it brought to our online lives. It was often a place where “micro-cheating” activity was caught, for example. That is, it could reveal when a person in a committed relationship was spending just a little too much time liking someone else’s posts, engaging with an ex’s content or networking with series of potential “backup partners” on a regular basis. 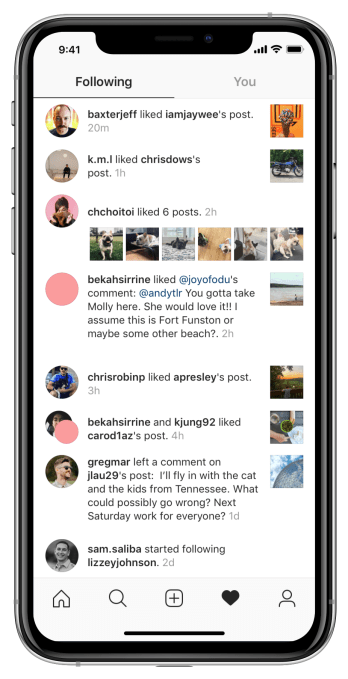 It also could easily reveal when someone’s main use case for Instagram was to like and follow IG “models” — something that didn’t seem like the kind of activity most would want to be offered in a trackable format. (And information that was particularly awkward to see when the person in question was not a close friend, but rather a work colleague of some sort.)

The tab was known to have impacted or even ended friendships, too — like in the case where someone wouldn’t respond to their friend’s texts, or claim they were “busy.” Meanwhile, they were consistently active on Instagram, and very obviously lying.

Gossip followers also liked the tab, as it would reveal who celebs were following — sometimes an indication of a new relationship, either personal or professional in nature.

Overall, the tab generally became known as a creepy tool, and not one that offered any significant benefit to users in terms of being a legitimate discovery mechanism.

Though Instagram is only announcing this change today, many users had already lost access to the tab. Back in August, for example, a big thread on Reddit saw users complaining their Following tab had disappeared. They assumed it was a bug, however.

After the tab’s removal, you’ll only see your own activity, as before, when you click the Heart button.

The company says the Following tab is being removed starting today, but it will take the rest of the week for the rollout to complete.