As Facebook prepares to launch a “news tab” this month featuring news stories curated by humans to complement the headlines that appear in your social feed generated by your friends’ shares, paid promotions and algorithms, a new report paints a damning picture of how social media is viewed as a news platform today. 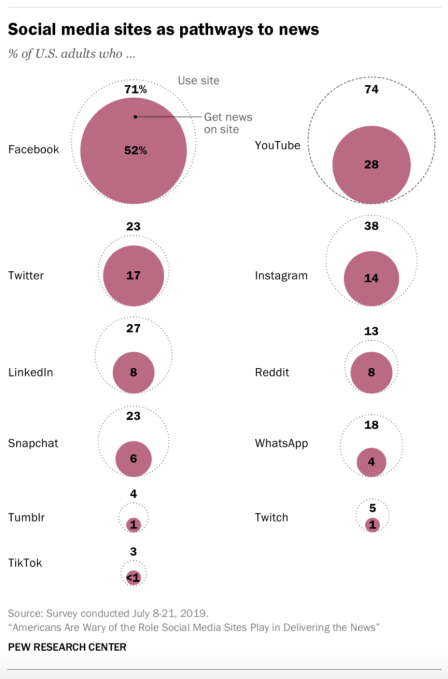 A survey from the Pew Research Center found that more than half of the U.S. adults surveyed by the group this past July — some 52% — already get their news from Facebook, making it the most popular social platform for news sourcing, with YouTube and Twitter the second- and third-most popular at 28% and 17%, respectively, and a variety of other platforms like Instagram, LinkedIn, Reddit and Snapchat also making smaller but notable appearances.

Overall, a full 88% of all those surveyed believed that social media has “at least some control” over the news people see.

But sentiments about that control are poor.

A majority — 62% — of respondents believe social media has “too much control” over the mix of news we see on their platforms, and 55% said they believed that this results in a worse mix of news. A full 53% identified one-sided news and 51% named inaccurate news as “very big problems” on social media.

The findings are unsettling: They underscore an already huge amount of power that the likes of Facebook have when it comes to news consumption, but they also underscore how people seem to have already determined that the effect of that has been bad.

The findings also come on the heels of disturbing stories about how much those platforms get manipulated by bad actors. The stories of how political groups and state actors hiding their identities have promoted misleading stories on social platforms stretch back years at this point, but even as the platforms work to try to identify and take down these accounts, other misuse that is less hidden continues to arise.

Just last month, it was found that those promoting stories through paid channels (advertising, that is) can rewrite news headlines to fit their own political agendas, shifting the tone of the news for the vast majority of people who never click through to stories and only read the summary headlines as they scroll to see the latest pictures of their friends’ kids.

And it’s not just bad news for consumers. Publishers have long lamented that they don’t get a cut of any kind on the revenues that social platforms make from sharing their stories and turning them into monetizing traffic, and there has been some thinking that this would soon change as a result of increased regulatory scrutiny. However, a report in the WSJ this week implies that this might not be changing anytime soon. It claims that Facebook will only be paying a small handful of the publishers whose content will get shared in its human-curated news tab. 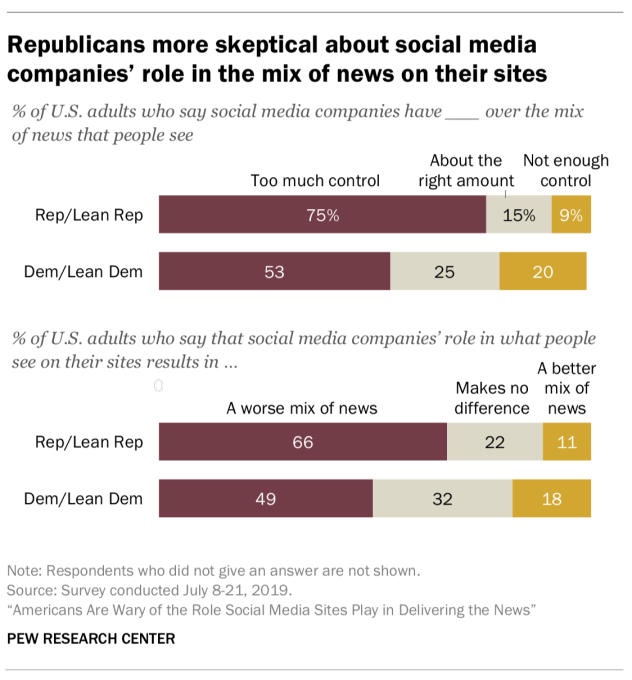 Pew also notes that 48% of social media news consumers — recall that more Republicans than Democrats believe social media sites have too much control — believe the news they see is “liberal or very liberal.” That compares to 14% believing news is conservative or very conservative. This would support the feeling among many on the right that the media is too liberal, but also that they are being fed news that is not in keeping with their own political leanings.

The survey also puts paid to the recent report about how only a handful of publishers will get paid by Facebook: 82% of respondents feel that not all news sources are treated equally by social media now — meaning some get more circulation than others. Some 88% believe that those publishing “attention-grabbing” articles, otherwise known as “click bait,” are more likely to appear in the feed. And, 84% believe that social media following plays an important role, and 79% believe that the political leaning of the story affects how much it appears in your feeds.

On the division between male and female readers, the report’s findings are not unsurprising and follow much of the same lines we’ve seen in other social media surveys: the likes of Reddit lean heavily to male readers, while Facebook leans female. 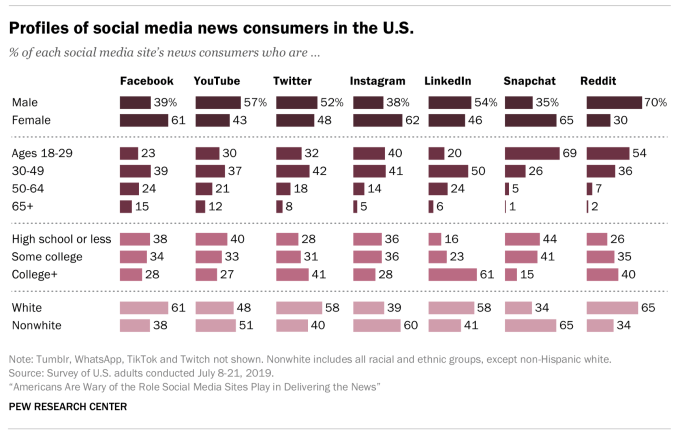 Lastly, while the report is more about bias in news and sentiment around that, it’s interesting to note which platforms are appearing here and in what concentration. TikTok — which many think could be the next big juggernaut in social — is at less than 1 % when it comes to being a platform for getting news. Snapchat, meanwhile, also is languishing at a mere 6% for news delivery.

Given their heavy concentration on younger users, this points to the fact that younger people are not really using any social channels to get news, but also that they are not particularly interested in reading news. Social platforms may currently be positioned as pariahs in the news landscape, but they don’t have to be: these could also be opportunities to change the conversation, bringing in more people who traditionally are not being cut in.

Pew surveyed 5,107 respondents from its American Trends research panel from July 8 to July 21.