From afar, Olli resembles many of the “future is now!” electric autonomous shuttles that have popped up in recent years.

The tall rectangular pod, with its wide-set headlights and expansive windows nestled between a rounded frame, gives the shuttle a friendly countenance that screams, ever so gently, “come along, take a ride.”

But Olli is different in almost every way, from how it’s produced to its origin story. And now, its maker, Local Motors, has given Olli an upgrade in hopes of accelerating the adoption of its autonomous shuttles.

“The future is here; it’s just not evenly distributed,” Local Motors co-founder and CEO John B. Rogers Jr. said in a recent interview. “That’s something I say a lot. Because people often ask me, ‘Hey, when will I see this vehicle? 2023? What do you think?’ My response: It’s here now, it’s just not everywhere.”

Whether individuals will adopt Rogers’ vision of the future is another matter. But he argues that Olli 1.0 has already been a persuasive ambassador. 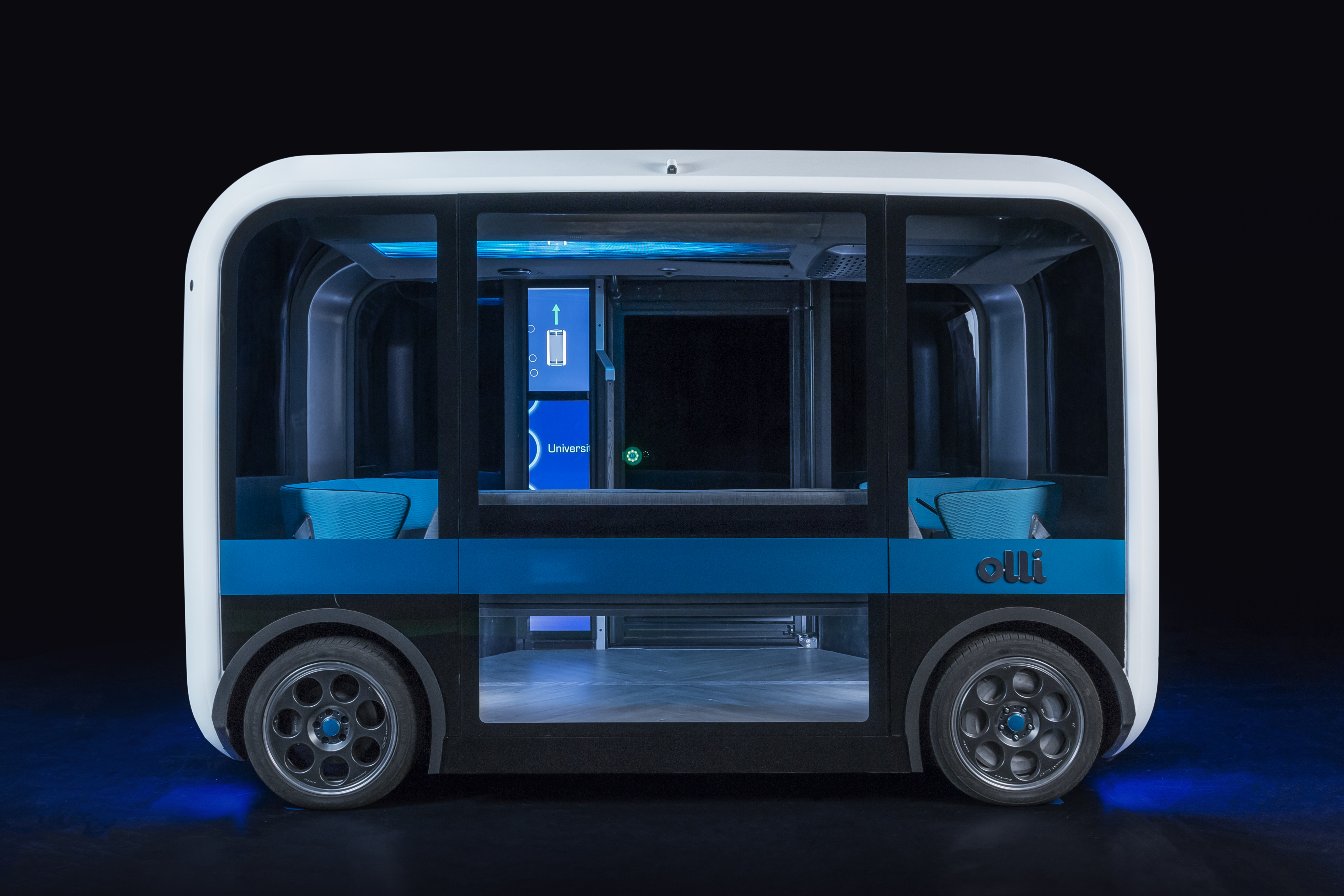 Olli 1.0 made its debut in 2016 when it launched in National Harbor, Md., at a planned mixed-use development a few miles south of Washington, D.C. In the two years since, Olli has shown up at events such as LA Automobility, and been featured by various media outlets, including this one.  Heck, even James Cordon rode in it.

Local Motors, which was founded in 2007, and its Olli 1.0 shuttle are familiar figures in the fledgling autonomous vehicle industry. But they’re often overshadowed by the likes of Argo AI, Cruise, Uber and Waymo — bigger companies that are all pursuing robotaxis designed for cities.

Olli, meanwhile, is designed for campuses, low-speed environments that include hospitals, military bases and universities.

“The public isn’t going to see New York City with autonomous vehicles running around all the time (any time soon),” Rogers said. Campuses, on the other hand, are a sweet spot for companies like Local Motors that want to deploy now. These are places where mobility is needed and people are able to get up close and personal with a “friendly robot” like Olli, Rogers said.

Olli and Olli 2.0 are clearly siblings. The low-speed vehicle has the same general shape, and a top speed of 25 miles per hour. And both have been crash tested by Local Motors and come with Level 4 autonomous capability, a designation by the SAE that means the vehicle can handle all aspects of driving in certain conditions without human intervention.

Olli 2.0 has a lot more range — up to 100 miles on a single charge, according to its spec sheet. The manufacturing process has been improved, and Olli 2.0 is now 80% 3D-printed and has hub motors versus the axle wheel motors in its predecessor. In addition, there are two more seats in Olli 2.0 and new programmable lighting.

But where Olli 2.0 really stands out is in the improved user interface and more choices for customers looking to customize the shuttle to suit specific needs. As Rogers recently put it, “We can pretty much make anything they ask for with the right partners.” 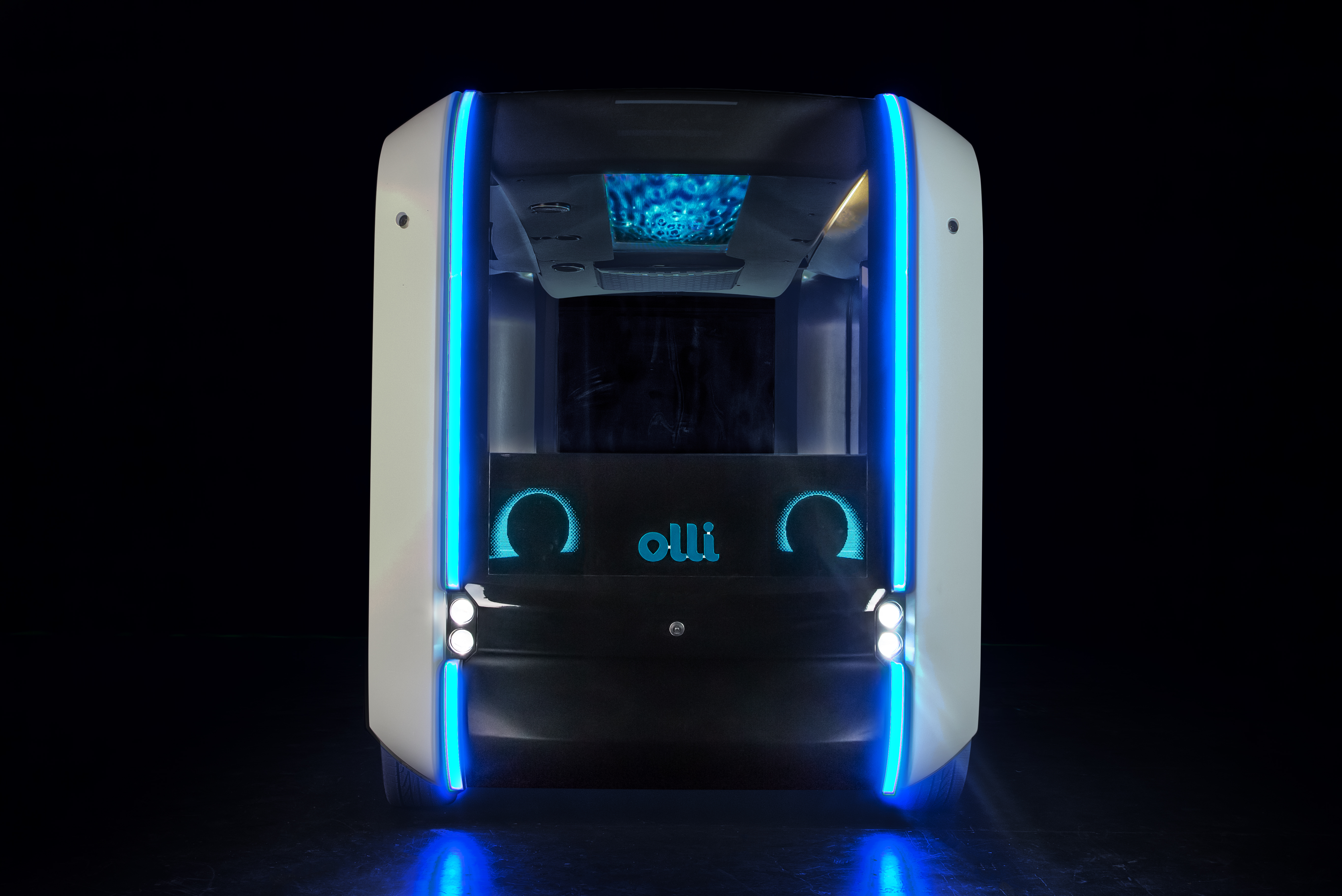 The outside of Olli 2.0 is outfitted with a PA system and screens on the front and back to address pedestrians. The screen in the front can be shown as eyes, making Olli 2.0 more approachable and anthropomorphic.

Inside the shuttle, riders will find better speakers and microphones and touchscreens. Local Motors has an open API, which allows for an endless number of UI interfaces. For instance, LG is customizing media content for Olli based on the “5G future,” according to Rogers, who said he couldn’t provide more details just yet.

AR and VR can also be added, if a customer desires. The interior can be changed to suit different needs as well. For instance, a hospital might want fewer seats and more room to transport patients on beds. It’s this kind of customization that Rogers believes will give Local Motors an edge over autonomous shuttle competitors. 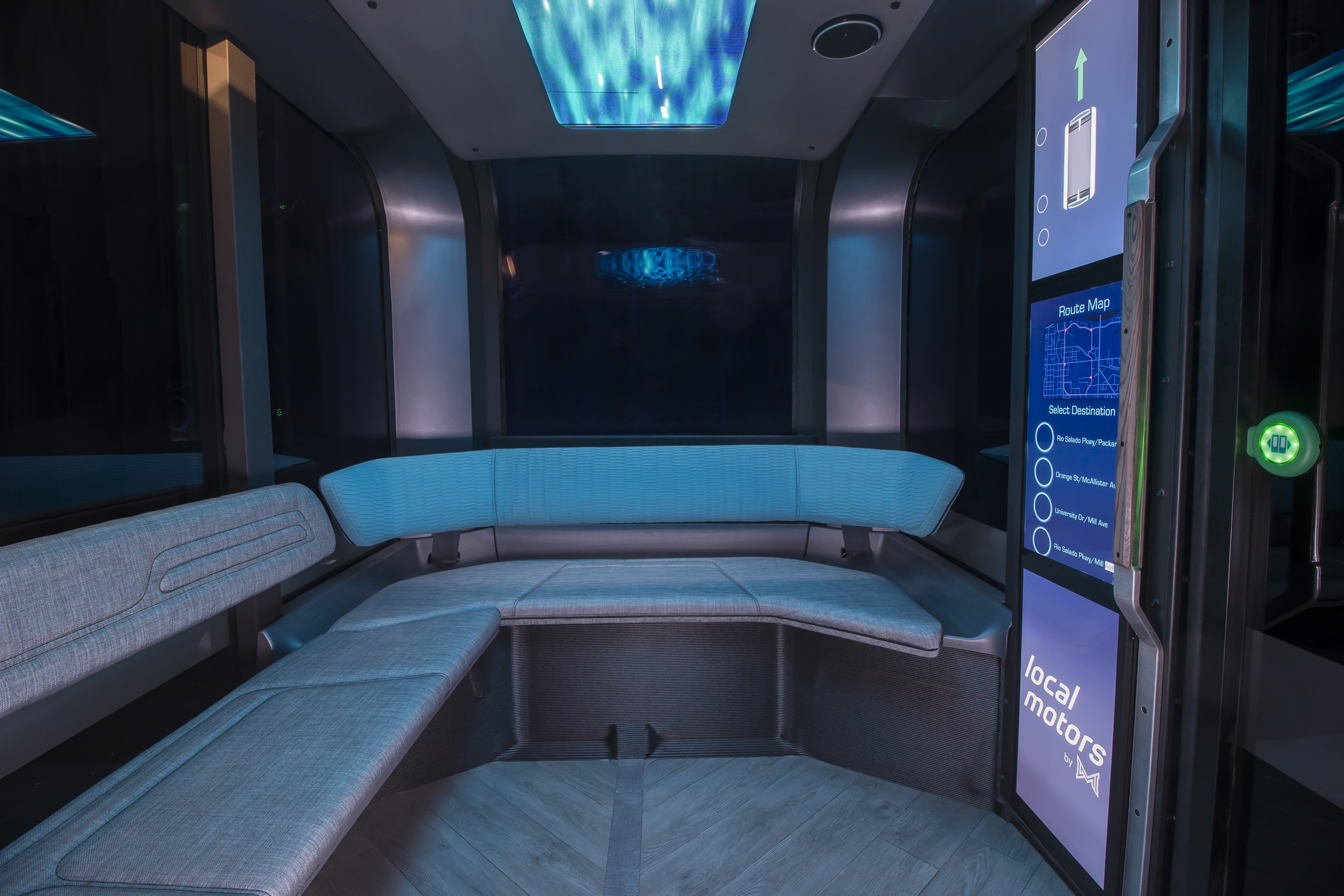 Even the way Olli 2.0 communicates has been improved.

Olli 1.0 used IBM Watson, the AI platform from IBM, for its natural language and speech to text functions. Olli 2.0 has more options. Natural language voice can use Amazon’s deep learning chatbot service Lex and IBM Watson. Customers can choose one or even combine them. Both can be altered to make the system addressable to “Olli.”

The many people behind Olli

In the so-called race to deploy autonomous vehicles, Local Motors is a participant that is difficult to categorize or label largely due to how it makes its shuttles.

It’s not just that Local Motors’ two micro factories — at its Chandler, Ariz. headquarters and in Knoxville, Tenn. — are a diminutive 10,000 square feet. Or that these micro factories lack the tool and die and stamping equipment found in a traditional automaker’s factory. Or even that Olli is 3D-printed.

A striking and perhaps less obvious difference is how Olli and other creations from Local Motors, and its parent company Local Motors Industries, come to life. LMI has a co-creation and low-volume local production business model. The parent company’s Launch Forth unit manages a digital design community of tens of thousands of engineers and designers that co-creates products for customers. Some of those mobility creations go to Local Motors, which uses its low-volume 3D-printed micro factories to build Olli and Olli 2.0, as well as other products like the Rally Fighter.

This ability to tap into its community and its partnerships with research labs, combined with direct digital manufacturing and its micro factories, is what Rogers says allows it to go from design to mobile prototype in weeks, not months — or even years.

The company issues challenges to the community. The winner of a challenge gets a cash prize and is awarded royalties as the product is commercialized. In 2016, a Bogota, Colombia man named Edgar Sarmiento won the Local Motors challenge to design an urban public transportation system. His design eventually became Olli.

(Local Motors uses the challenges model to determine where Olli will be deployed, as well.)

New design challenges are constantly being launched to improve the UI and services of Olli, as well as other products. But even that doesn’t quite capture the scope of the co-creation. Local Motors partners with dozens of companies and research organizations. Its 3D-printing technology comes from Oak Ridge National Laboratory, and Olli itself involves a who’s who in the sensor, AV and supplier communities.

Startup Affectiva provides Olli’s cognition system, such as facial and mood tracking of its passengers and dynamic route optimization, while Velodyne, Delphi, Robotic Research and Axis Communications handle the perception stack of the self-driving shuttle, according to Local Motors. Nvidia and Sierra Wireless provide much of the Human Machine Interface. Other companies that supply the bits and pieces to Olli include Bosch, Goodyear, Protean and Eastman, to name just a few.

Where in the world is Olli?

Today, Olli 1.0 is deployed on nine campuses, the most recent ones at the Joint Base Myer – Henderson Hall, a joint base of the U.S. military located around Arlington, Va., which is made up of Fort Myer, Fort McNair and Henderson Hall. Olli was also introduced recently in Rancho Cordova, near Sacramento, Calif.

Production of Olli 2.0 began in July and deliveries will begin in the fourth quarter of this year. In the meantime, three more Olli shuttle deployments are coming up in the next six weeks or so, according to Local Motors, which didn’t provide further details.

Production of Olli 1.0 will phase out in the coming months as customer orders are completed. Olli will soon head to Europe, as well, with Local Motors planning to build its third micro factory in the region.