The VW electric ID Buggy concept is delightful and bright, stout and smiling. It’s a vehicle fit for the sunshine and sand dunes, or perhaps a less committing slow roll along the beach.

And so my first drive in a prototype of the all-electric buggy — along the coast near Spanish Bay in Monterey, Calif., — was tinged with sadness. After all, the ID Buggy is just a concept. It’s not meant for this world. At least not right now.

There is still a chance that the ID Buggy will make it to production. VW is already in talks with “at least one company” to bring the buggy into production, TechCrunch confirmed.

The global debut of the ID Buggy concept at the 89th Geneva International Motor Show in March was meant to showcase VW’s electric future and demonstrate the versatility of its modular electric drive toolkit chassis, or MEB. The MEB, which was introduced in 2016, is a flexible modular system — really a matrix of common parts — for producing electric vehicles that VW says make it more efficient and cost-effective.

VW has shown off several ID concepts. Some of these, like the ID Crozz and ID Buzz are going into production. A production version of the Crozz is coming to the U.S. at the end of 2020. Others, like this buggy, are not currently on the production track.

The ID Buggy is simple, and that’s exactly what it should be. No clutter or whiz-bang creature comforts. Instead, this leisure vehicle inspired by the 1960s era Meyers Manx has no roof or doors — although a tarpaulin can be stretched between the windscreen frame and the Targa bar as a sun sail or light weather protection. Without doors, the driver climbs in, and with relative ease, depending on one’s general fitness and flexibility.

The ID Buggy towers over its inspiration — the iconic Meyers Manx buggy that became popular among the California beach-and-surf culture of the 1960s.

The ID Buggy was also a quieter, smoother ride than the Meyers Manx. I also spent some time in a classic bright red buggy with a four-speed manual transmission and gas engine that might have been a touch carbureted. While the Manx roared as I shifted into first and peeled away, the electric ID Buggy was silent and smooth as it rolled out of the sandy parking lot. 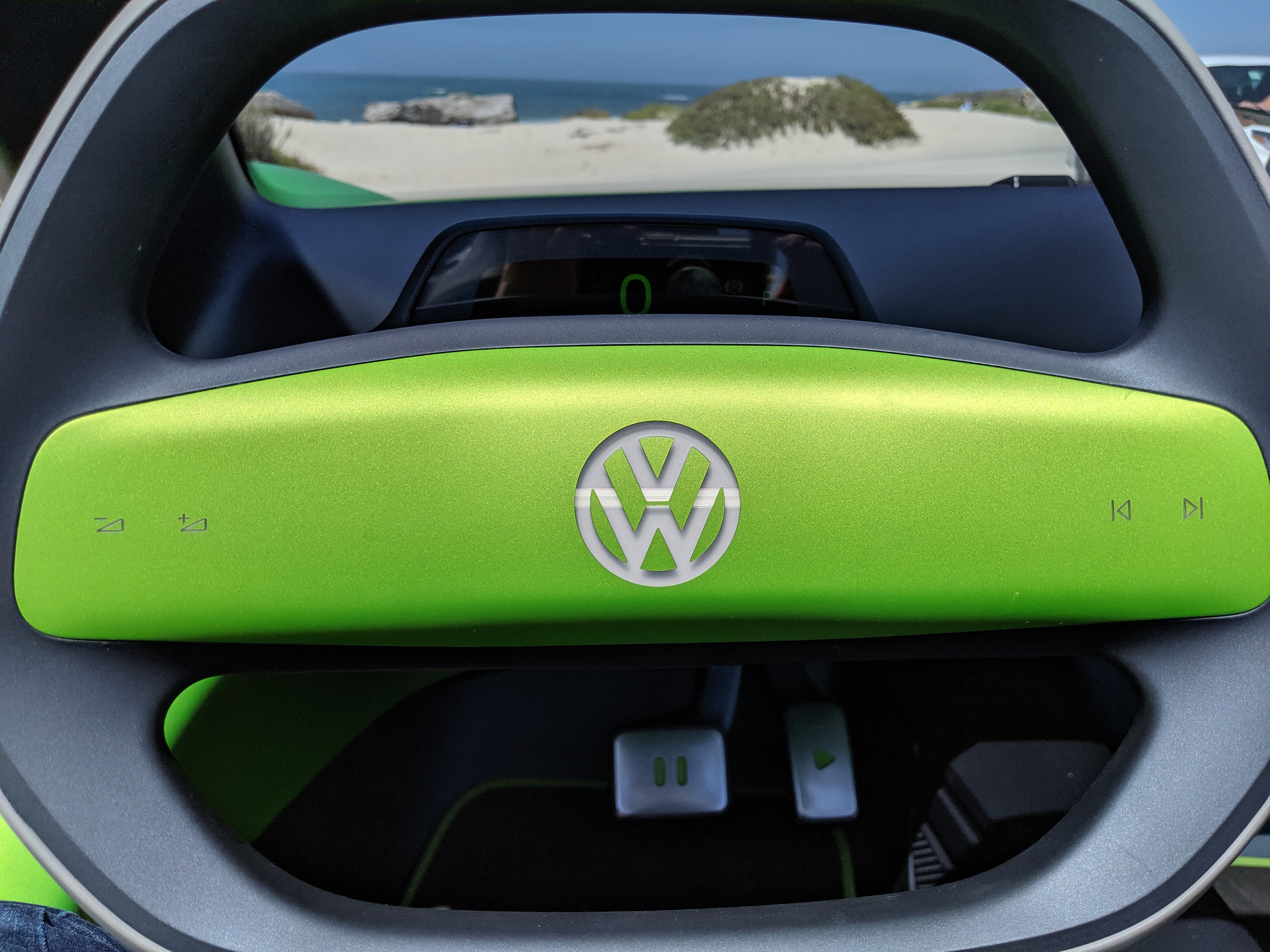 The main detail inside the ID Buggy is the lack of features and do-dads. The hexagonal steering wheel, shown above, isn’t littered with toggles; there are just a couple of controls on the crossbar. A small integrated stock to the right side of the steering wheel allows the driver to move the vehicle into drive, reverse and park. A digital instrument cluster provides the basic information like speed.

Even the brake and accelerator pedals continue this stripped-down design story.

The dashboard and the passenger area are just as void of features. This lack of “stuff” is more about function than form, although the matte green and textured grey blue at the bottom does make a visual statement. The ID Buggy is meant to be driven in the elements, rain or shine. And so designers made the interior waterproof. 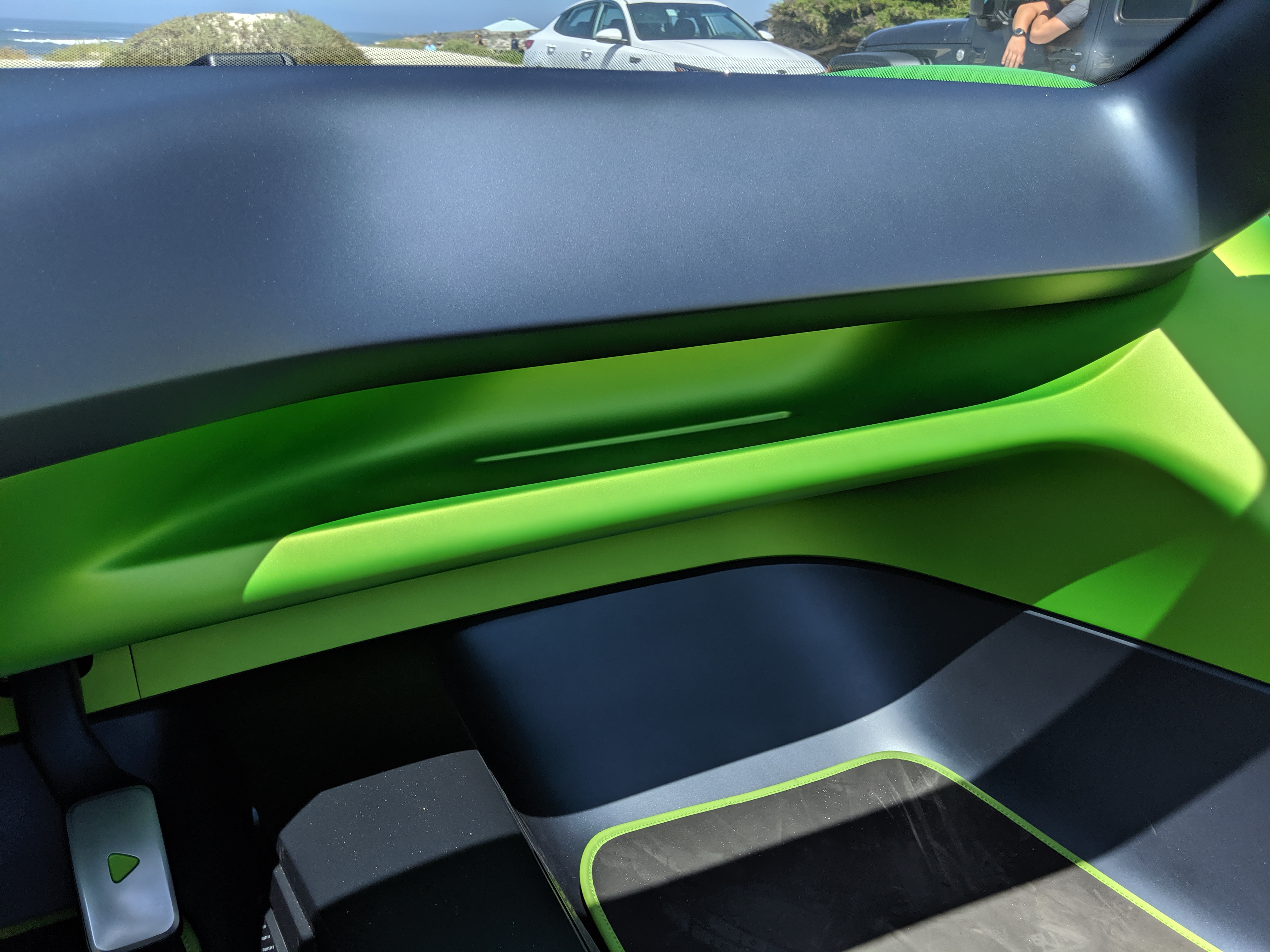 Under the ID Buggy’s body is where the good stuff lives.

The rear-wheel drive buggy is outfitted with an electric motor that produces 201 horsepower and a maximum torque of 228 pound-feet. It has a 62-kilowatt-hour battery that can travel 155 miles (under the WLTP standard) on a single charge. There is not an EPA estimate for the range. It can accelerate from a standstill to 62 miles per hour in 7.2 seconds.

Unfortunately, this prototype had a kill-the-thrill speed limiter on it, scuttling my plans for a zippy ride along the coast.

Still, the ID Buggy offered a fun and easy, breezy ride. It handled the curves of the roads with ease and its wide body and higher rear end provided a sense of security even while driving amid other much larger passenger cars. 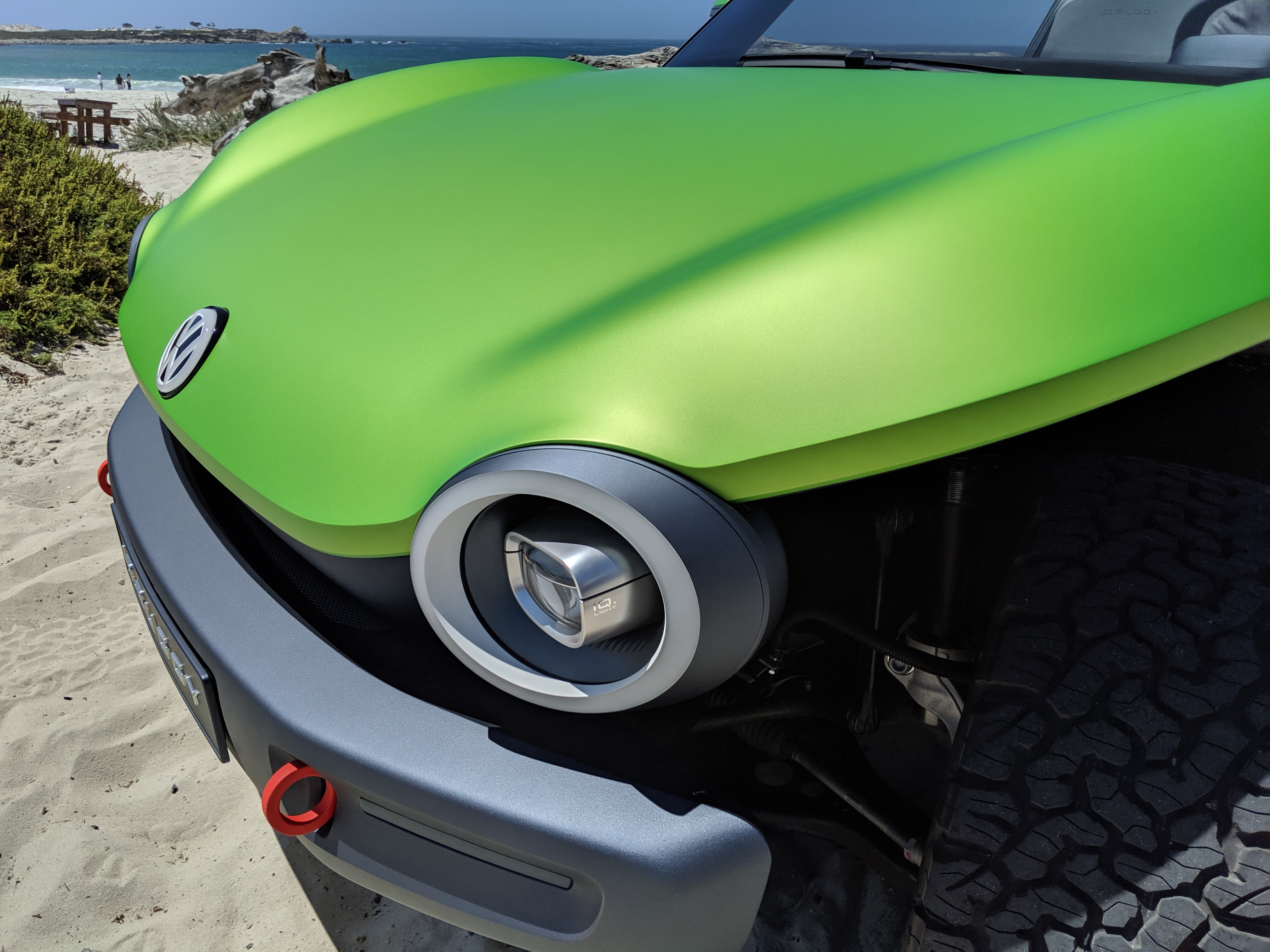 It’s unclear what company, or companies, are in talks to produce the buggy. VW wouldn’t give names; not even the ocean breeze and cloudless sky or the endless supercar eye candy were enough to loosen the lips of VW employees during Monterey Car Week.

It’s possible that this unnamed company is e.Go Mobile. VW announced in March that e.Go Mobile would be its first external partner to use its MEB electric platform to launch other EVs in addition to Volkswagen’s model range. A dedicated vehicle project is already being planned, VW said at the time.

A VW spokesperson told TechCrunch there’s no decision about which car will be produced under this partnership with e.Go Mobile. It could be the buggy; it could also be some other vehicle.

And then there’s Ford. Earlier this year, the two automakers announced a partnership that includes Ford producing electric cars based on the MEB developed by Volkswagen.

The VW folks on the ground in Monterey did express hope that a third party does build the buggy, or a modified version of it. As one spokesperson later told TechCrunch, “As the drive in Monterey showed, the Buggy is a great ambassador for Volkswagen and for e-mobility. I am sure it would find a lot of customers.”

In the end, the ID Buggy is a sleek cruiser rather than a beach bomber like the 1960s original. It successfully demonstrates the versatility around VW’s electric platform. After all, Volkswagen foresees critical parts in the ID Buggy used to power multiple consumer electric vehicles in the near future. And it’s a fair assumption the ID Buggy’s production cousins will have a bit more gadgets, including silly things like doors.