This year has been a breakout one for podcasting. According to Edison Research’s Infinite Dial report, more than half of Americans have now listened to a podcast, and an estimated 32% listen monthly (up from 26% last year). This is the largest yearly increase since this data started being tracked in 2008. Podcast creation also continues to grow, with more than 700,000 podcasts and 29 million podcast episodes, up 27% from last year.

Thanks to this growing listener base, big companies are finally starting to pay attention to the space — Spotify plans to spend $500 million on acquisitions this year, and already acquired content studio Gimlet, tech platform Anchor, and true crime network Parcast for a combined $400 million. In the past week, Google added playable podcasts to search results, Spotify released an analytics dashboard for podcasters and Pandora launched a tool for podcasters to submit their shows.

We’ve been going to Podcast Movement, the largest annual industry conference, for three years, and have watched the conference grow along with the industry — reaching 3,000 attendees in 2019. Given the increased buzz around the space, we were expecting this year’s conference to have a new level of energy and professionalism, and we weren’t disappointed. We’ve summarized five top takeaways from the conference, from why podcast ads are hard to scale to why so many celebrities are launching their own shows. 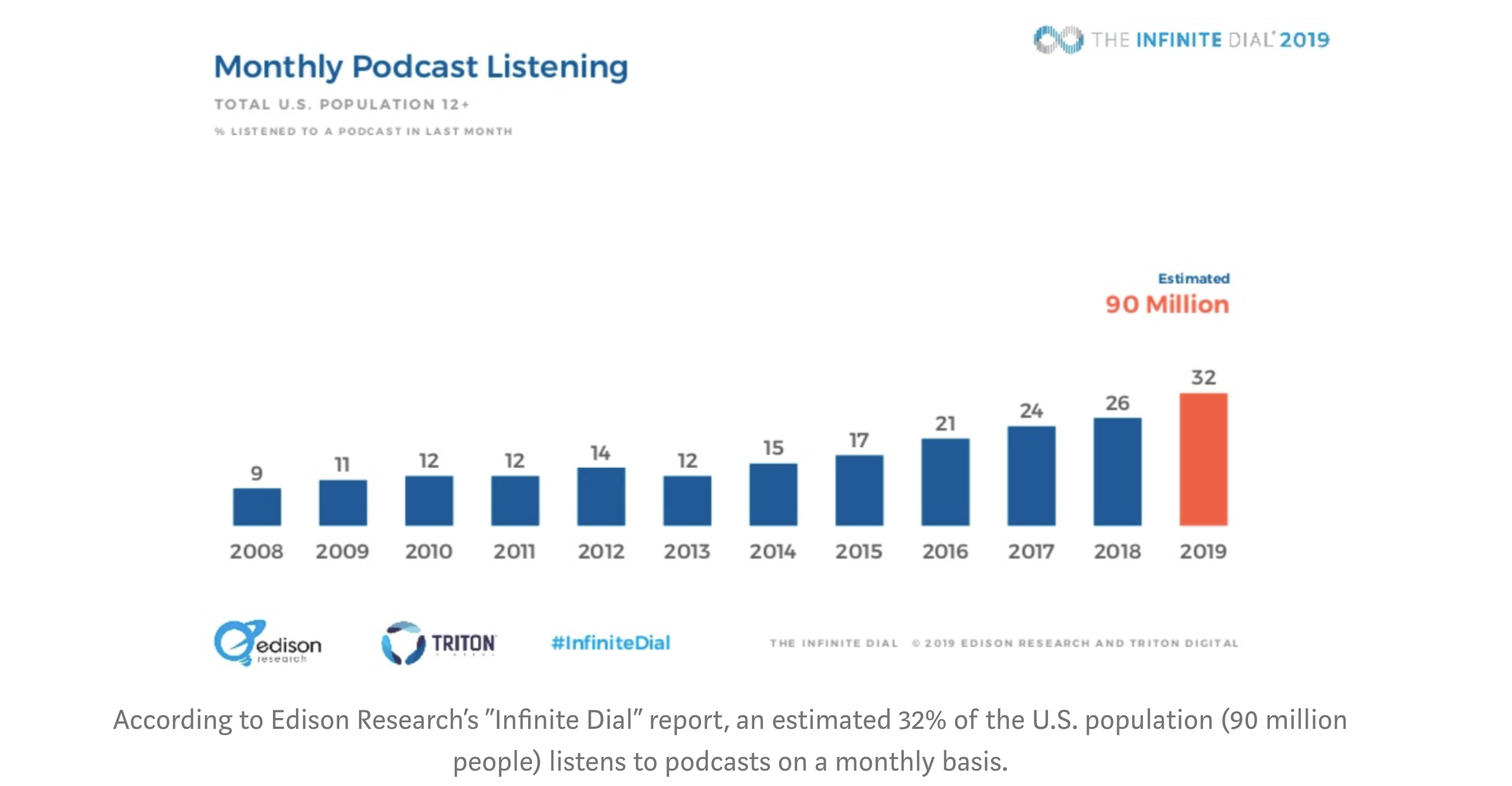 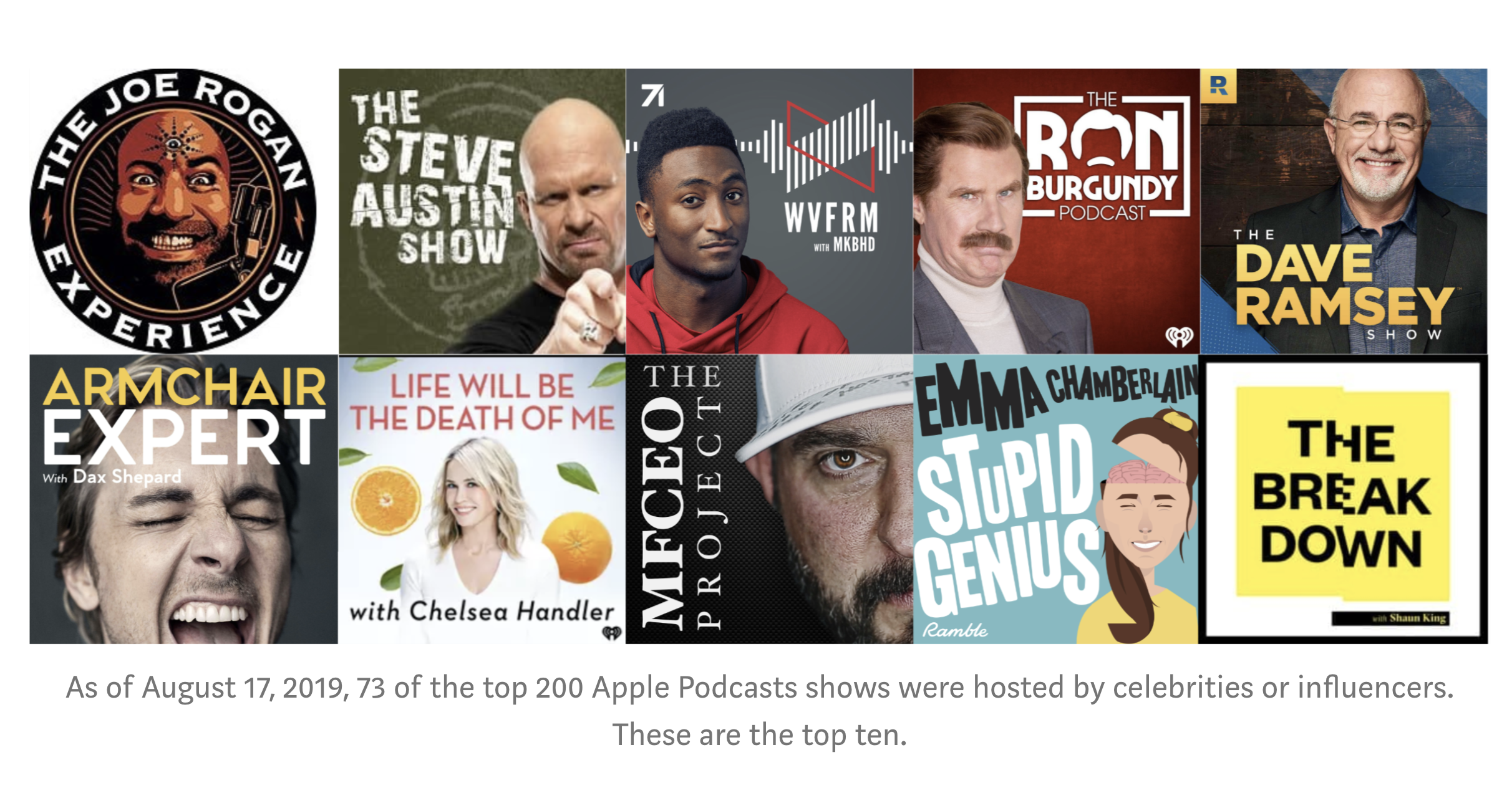 Though podcasts are undermonetized compared to other forms of media, talent agents now consider them to be an important part of a well-rounded content strategy. Dan Ferris from CAA tells his clients to think of podcasting as a way of connecting with fans that is “much more intimate than social media.” Podcasts also help celebrities find a new audience. Ben Davis from WME said that while his client David Dobrik has a smaller audience on his podcast than on YouTube (1.5 million downloads per episode versus 6 million views per video), the podcast helps him reach a new group of listeners who stumble upon his show on the Apple Podcast charts.

While some podcast veterans grumble about the rise of celebrity talk shows, famous podcasters are good for the industry as a whole. Advertisers are drawn to the space by the opportunity to get to access A-list talent at lower prices. One recent example is Endeavor Audio’s fiction show “Blackout,” which starred Rami Malek, who was fresh off an Oscar win. Endeavor’s head of sales, Charlie Emerson, said brands might have to sign a “seven or eight-figure deal” to advertise alongside Malek’s content in other forms of media. Other podcasters also benefit from new listeners brought into the medium by their favorite stars — a Westwood One survey in fall 2018 found that 60% of podcast listeners report discovering shows via social media, where celebrities and influencers have huge existing audiences to push content to. 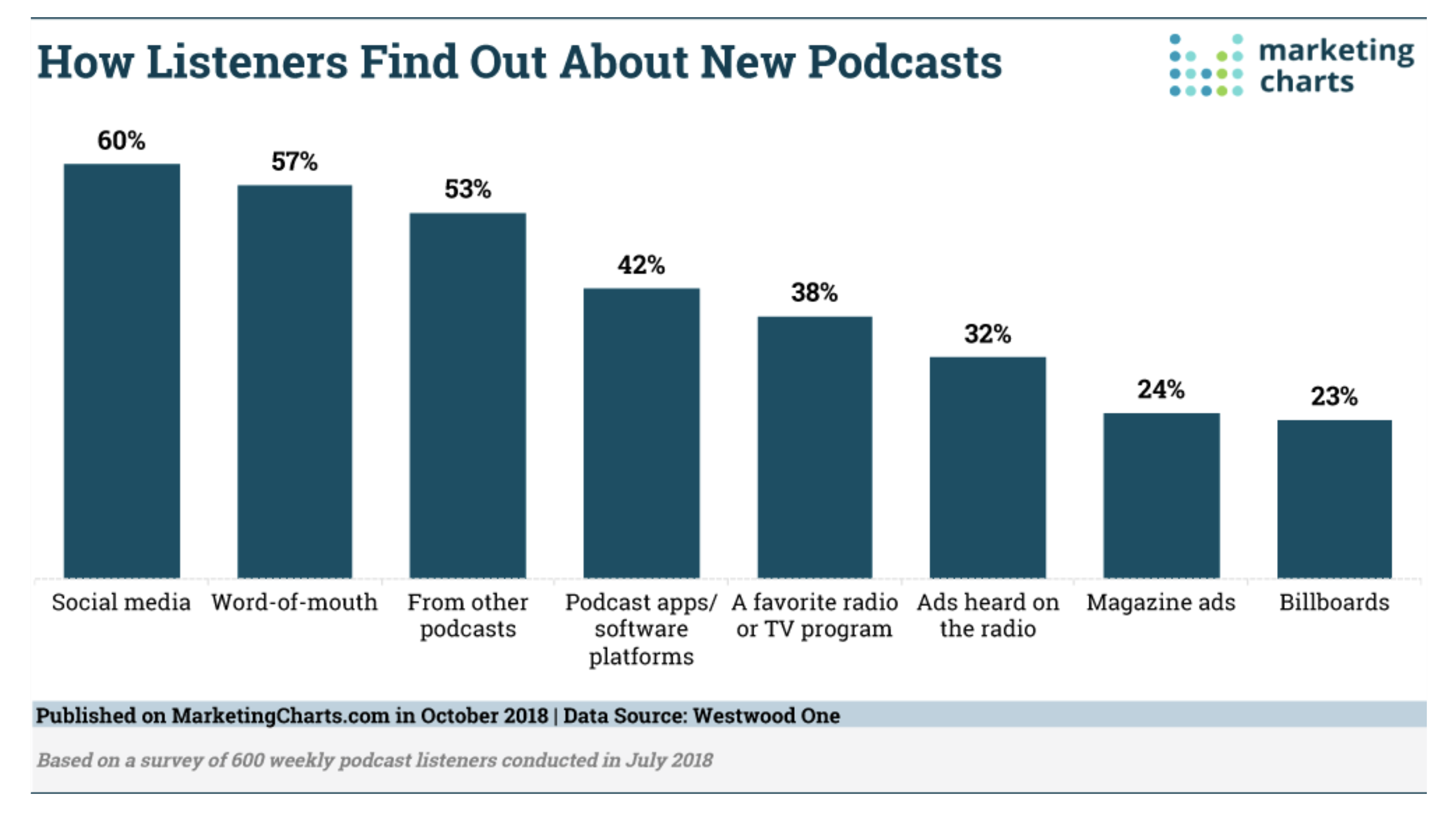 Paid listening apps represent a fairly small percentage of podcast listenership, with production platform Anchor estimating that Apple Podcasts and Spotify control more than 70% of listenership. A venture-backed company called Luminary is trying to change this — it raised $100 million to launch a “Netflix for podcasts” this spring. Consumers pay $7.99/month to access Luminary-exclusive shows alongside podcasts that are free on other apps. Because podcasts have RSS feeds, distributors like Luminary can easily grab free content and put it behind a paywall. The platform, not the creator, benefits from this monetization.

Within days of Luminary’s launch, prominent podcasters and media companies (The New York Times, Gimlet and more) requested their shows be removed from the app. It’s interesting to note that YouTube has a similar premium plan — for $11.99/month, users can access and download ad-free videos. Unlike Luminary, however, YouTube, pays creators a cut of the revenue from these subscriptions based on how frequently their content is viewed.

Unsurprisingly, creator sentiment is more positive toward platforms like Spotify and Pandora. Though these companies do make money from premium subscribers who listen to podcasts, creators can choose whether or not to submit their shows. And podcasters benefit from making their shows discoverable to the existing user base of these platforms, which already dominate “earshare.” Spotify alone has 232 million MAUs, which dwarfs the 90 million people in the U.S. who listen to a podcast monthly. 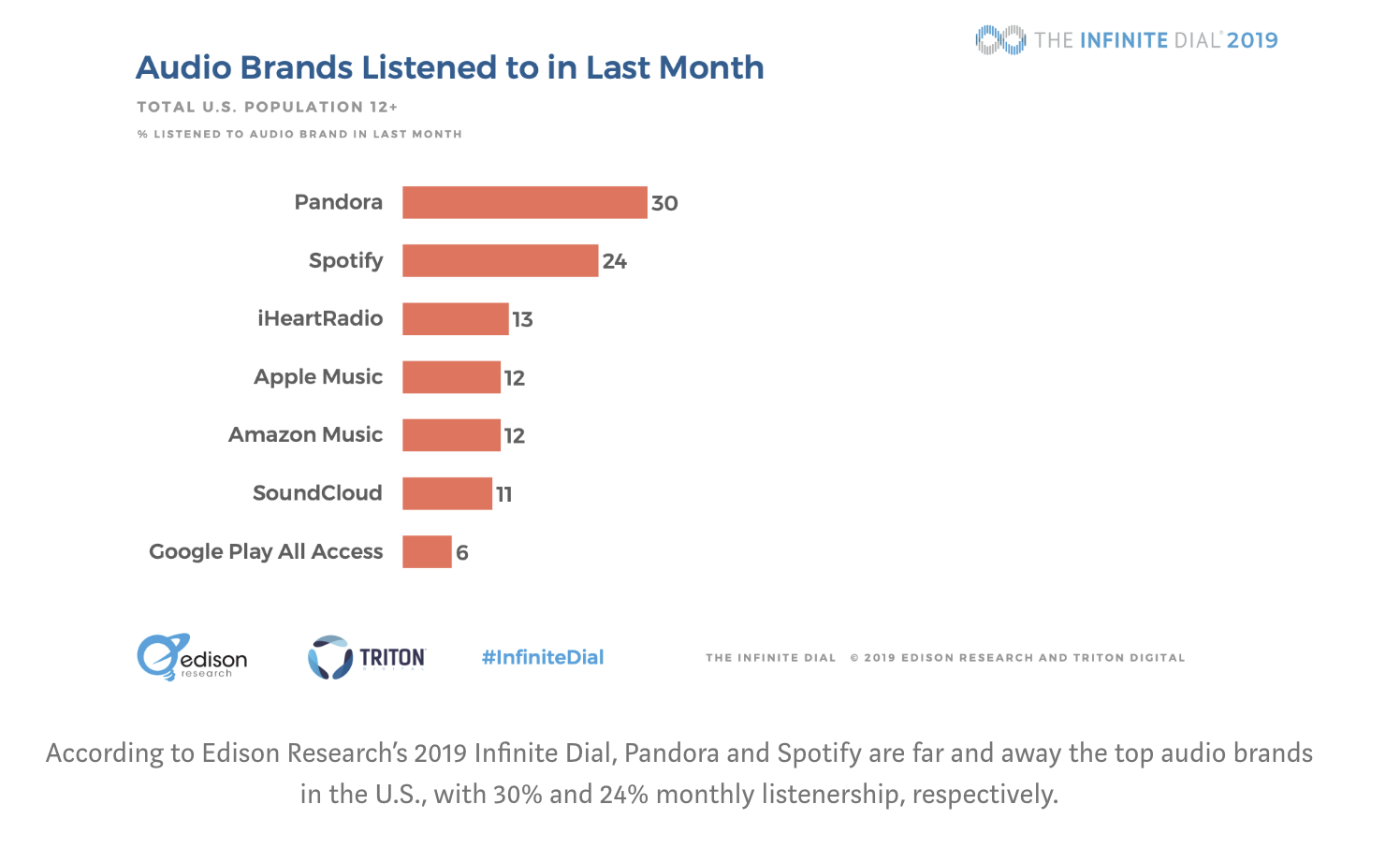 Podcast ad revenue has been scaling quickly, with $480 million in spend last year and a projected $680 million this year. Over the past four years, ad revenue has scaled at a 65% CAGR, and this growth is expected to continue. In its early days, the podcast ad market has largely been driven by D2C brands — you’ve probably heard hundreds of Casper, Blue Apron and Madison Reed ads. However, bigger brands are also starting to enter podcasting (Geico, Capital One and Progressive made the top 10 list for June 2019) due to the growing audience scale and increased precision around targeting and attribution.

While many attendees were excited by the massive growth in ad revenue, others worried that it may kill what makes podcasting special. They’re particularly concerned that podcasts may go the way of online video, with annoying, generic, low CPM ads. Podcast hosts typically read their own ads, and are often true fans of the product — they share personal stories instead of reciting brand talking points. This results in premium CPMs compared to most digital media — AdvertiseCast’s 2019 survey found an average CPM of $18 for a 30-second podcast ad and $25 for a 60-second ad, more than 2x the average CPM on other digital platforms. 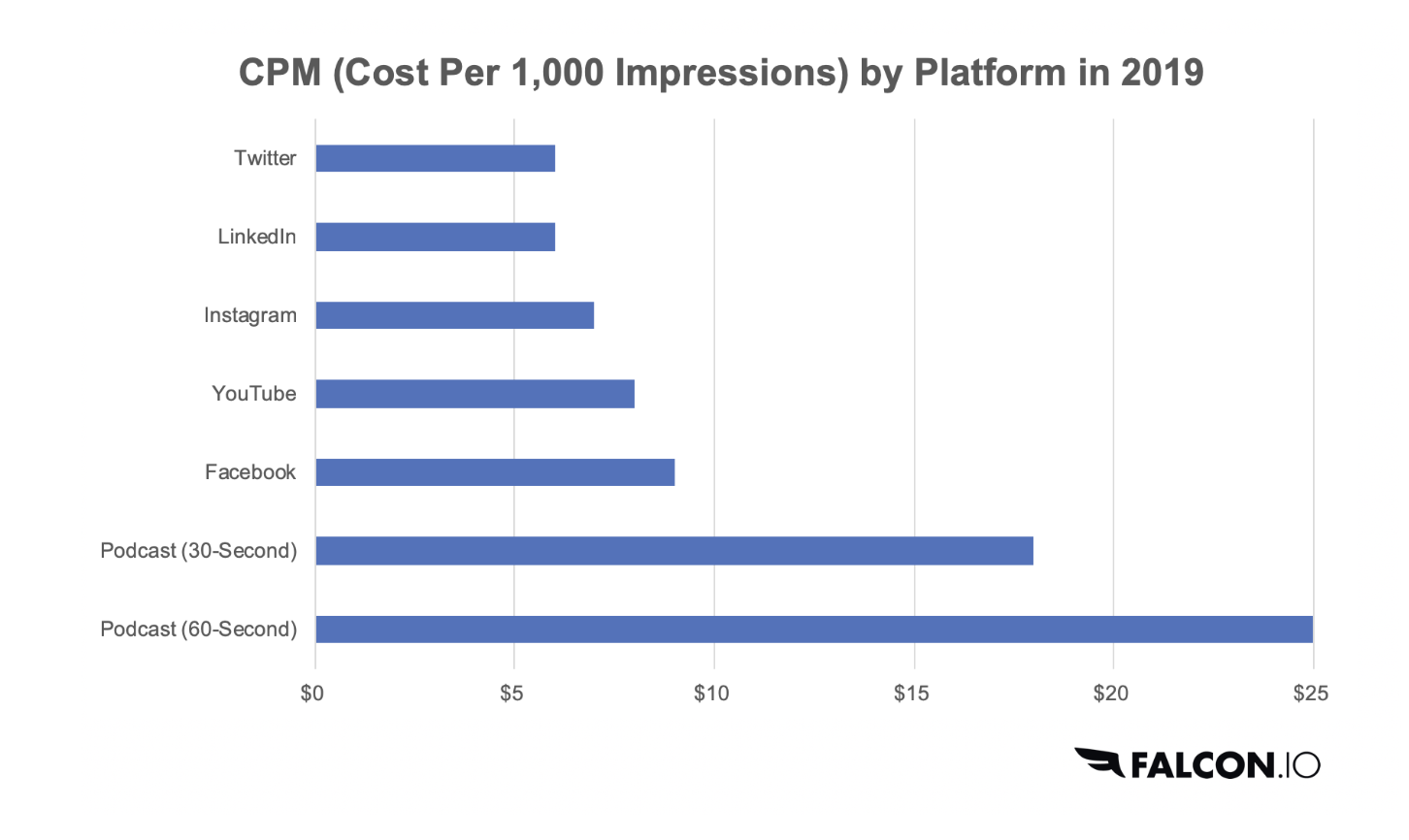 While these ads are effective, they’re time-consuming and expensive to produce. Big brands interested in podcast ads often expect to reuse radio spots — they aren’t used to the process of crafting and approving a host-read ad that may only reach 10,000 listeners. Podcasters, meanwhile, value their trust with listeners and don’t want to spam them with loud, unoriginal radio ads. The tension between maintaining the quality of ads while scaling quantity was an underlying theme of most monetization discussions, and industry veterans disagree on how it will play out.

Podcasts are still undermonetized — but there is hope!

Despite the growth in ad revenue and relatively high CPMs, the industry is significantly undermonetized. Using data from Nielsen, IAB and Edison, we calculated that podcasts monetize through advertisements at only $0.01 per listener hour — less than 10 times the rate of radio. Podcast monetization per listener hour has increased over the past year, up 25% by our calculations, but still substantially lags all other forms of media.

Why are podcasts so undermonetized? Unlike many other forms of media, the dominant distribution platform (Apple Podcasts) has no ad marketplace. Creators have historically had to approach brands themselves or sign with podcast networks to construct custom ad deals, and the “long tail” of podcasters were unable to monetize. This is finally changing. Anchor, which reported in January that it powers 40% of new podcasts, has an ad marketplace that has doubled the number of podcasts that are running ads. Other popular platforms like Radio Public have launched programs for small podcasters to opt-in to ad placements.

The second major hurdle in monetization is attribution. Podcasts have historically monetized through direct response campaigns — a podcaster provides a special URL or promo code for listeners to use when making a purchase. However, many people listen to podcasts when exercising or driving, and can’t write down the promo code or visit the URL immediately. These listeners might remember the product and make a purchase later, but the podcaster won’t get the attribution. Thomas Mancusi of Audioboom estimated that this happens in 50-60% of purchases driven by podcast ads.

Startups are trying to bring better adtech into podcasting to fix this issue. Chartable is one example — the company installs trackers to match a listener’s IP address with a purchaser’s IP address, allowing podcasters to claim attribution for listeners who don’t use their URL or promo code. Chartable currently runs on 10,000 shows, and the early results are so promising that ad agencies expect to see higher CPMs and significantly more spend in the space.

As podcasting grows, the listener base is diversifying. Edison Research looked into data on “rookie” listeners (listening for six months or less) and “veteran” listeners (listening for 3+ years), and found significant demographic differences. Only 37% of veterans are female, compared to 53% of rookies. While the plurality of veterans (43%) are age 35-54, 54% of rookies are age 12-34. Rookies are also 1.6x more likely to say they most often listen to podcasts on Spotify, Pandora or SoundCloud (43% versus 27% of veterans). And social media is an important way that rookies discover podcasts — 52% have found a podcast from video and 46% from audio on social media, compared to 41% and 37% for veterans. 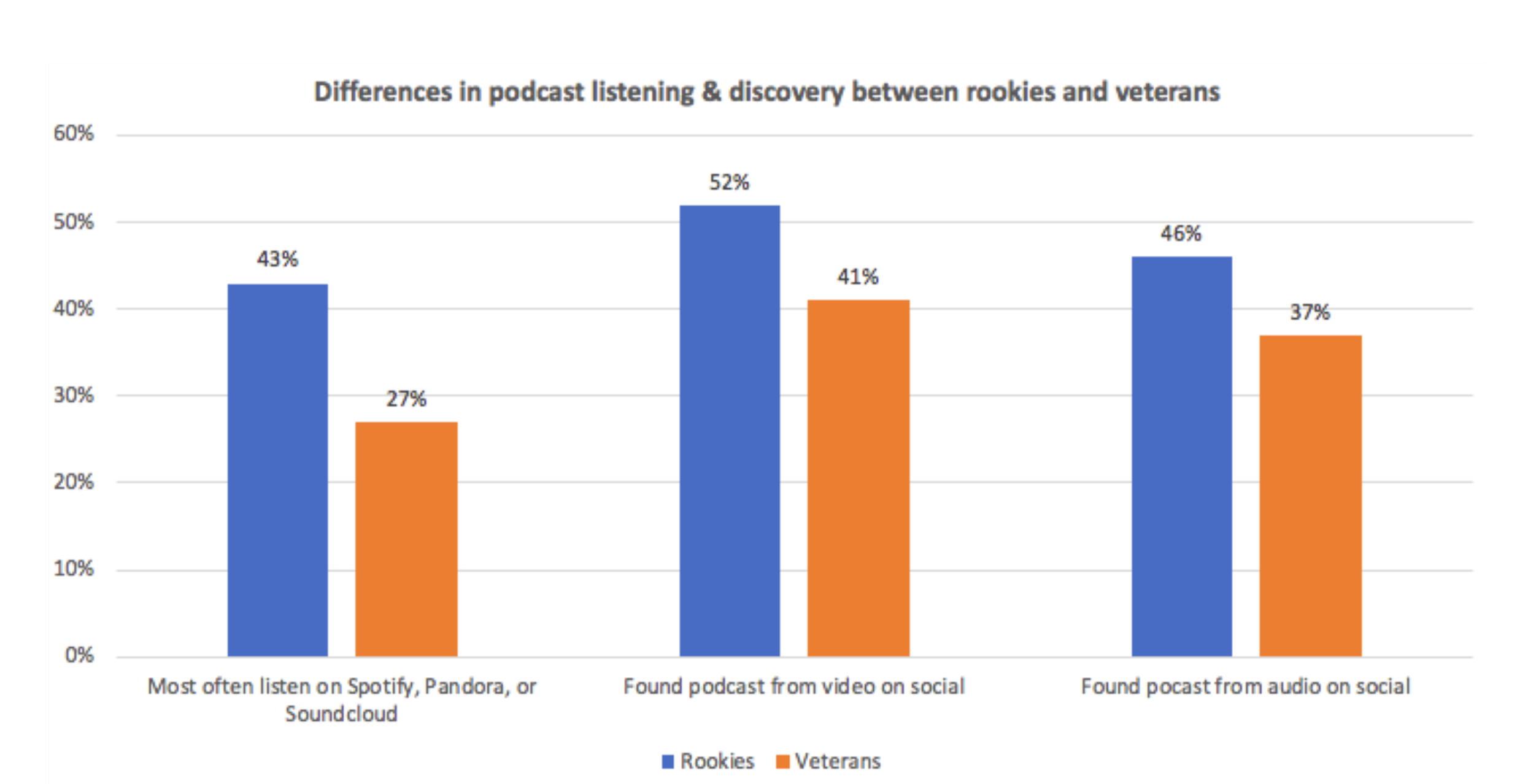 These new listeners will have a profound impact on the future of podcasting, in both the type of content produced and the way it’s distributed. Industry experts are already noting significant new demand for female-hosted podcasts, as well as audio dramas that appeal to young people looking for a fast-paced, suspenseful story. They’re advising podcasters to share clips of their content on social media, and to leverage broader listening platforms like YouTube and SoundCloud for distribution.

International markets also represent an enormous opportunity for growth. Most podcast listeners today live in the U.S. or China, but content producers are starting to see significant demand elsewhere. Castbox’s Valentina Kaledina said that many fans abroad have resorted to listening in their non-native language, with the top 100 shows in each country comprising a mix of English and local language. Adonde Media’s Martina Castro, who recently conducted the first listener survey on Spanish-language podcast fans, said that 53% of the survey’s 2,100 respondents reported listening to podcasts in English — and only 20% of them use Apple Podcasts. 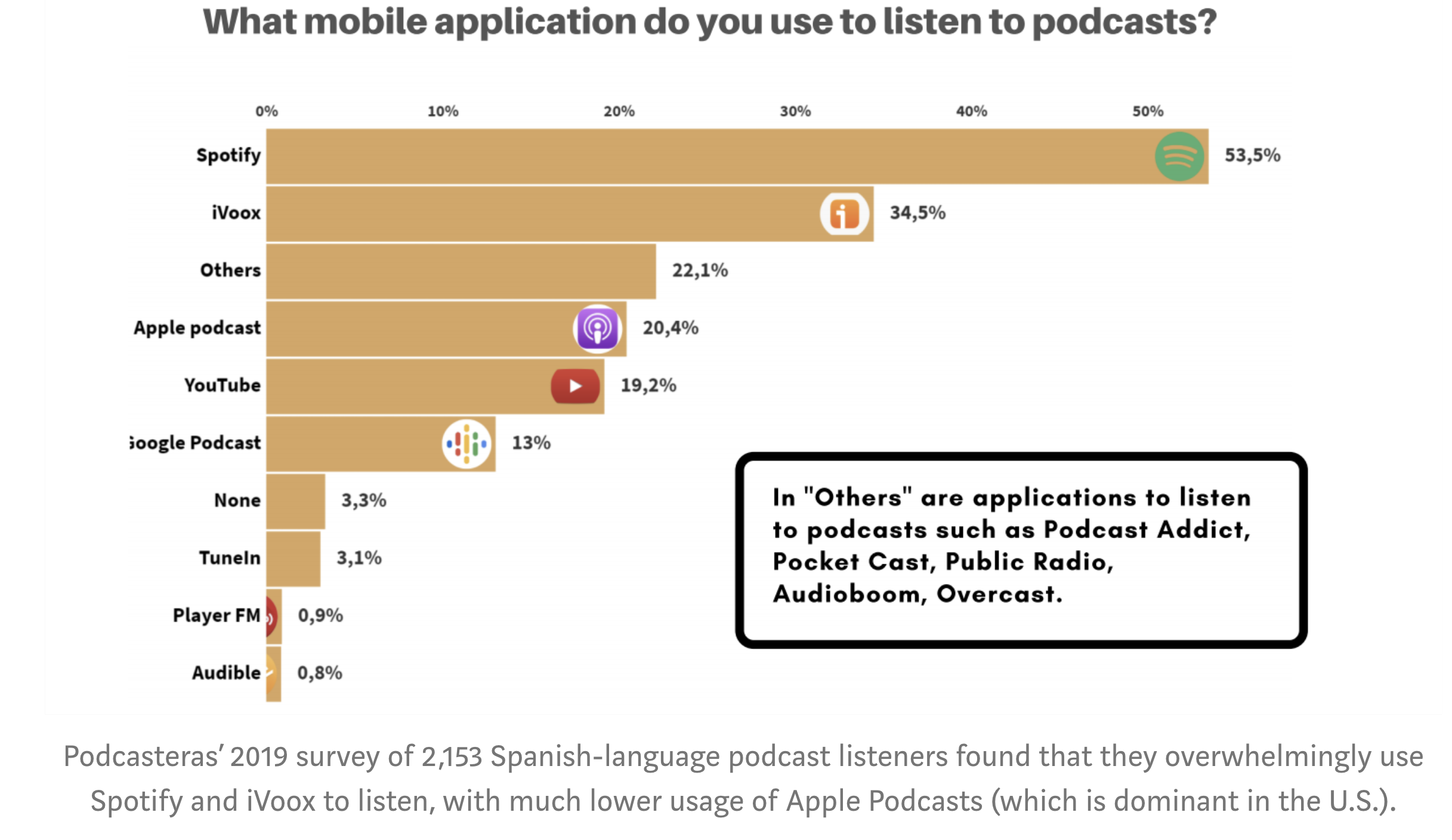 Larger podcast producers are beginning to translate shows for non-English-speaking markets. Wondery CEO Hernan Lopez announced at the conference that the company’s hit show Dr. Death is now available in seven languages. Lopez noted that it was an expensive process, and he doesn’t expect the shows to generate profit in the near future. However, he believes that Wondery will eventually see a significant return from investing in the development of new podcast markets — and if they do, other podcast companies will likely follow in their footsteps.