Apple continues to make use of Shazam, the music recognition app it acquired for $400 million in 2018. Earlier this month, Apple publicly launched its Music for Artists dashboard, which included insights powered by Shazam data. Today, Apple announced that Shazam data will also now power a new Apple Music chart: the Shazam Discovery Top 50.

The chart will feature a weekly global ranking of the top 50 artists on the move and their trending track, based on Shazam data.

The Shazam app has been downloaded a billion times and sees 20 million “Shazams” per day — that’s the number of times a user pushes the button to identify a song that’s playing. These Shazams will now be used to identify tracks that are poised for a breakout.

This is a different sort of metric than a traditional music chart would use, as it’s not a reference to how many downloads, purchases or streams a song has — instead, it lends itself more to insights about up-and-coming artists. 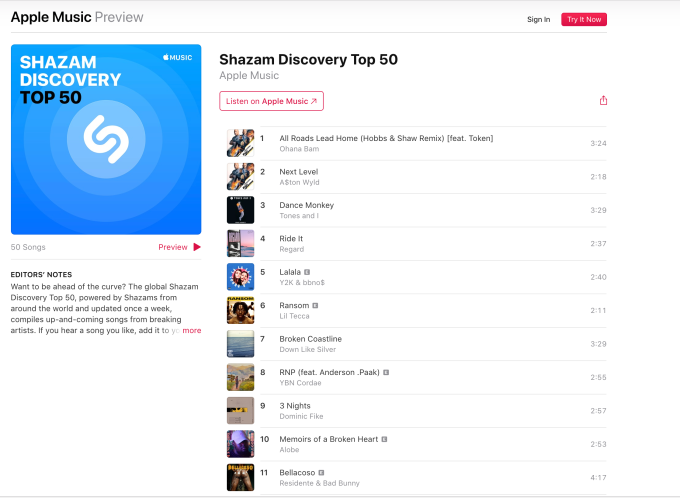 That said, the chart may include a variety of songs at different points in their life cycle. The majority may be emerging artists, but some songs may be experiencing a burst of momentum for other reasons. To rank on the chart, the song could be demonstrating a pattern of moving quickly through Shazam’s charts, rapid growth, steady growth, or it may be growing geographically, the company says. Or all of the above.

The new Apple Music chart will feature songs that are trending in the U.S. and more than 10 other countries.

This isn’t Shazam’s first foray into music charts, by any means. Today, you’ll find Shazam online offers a Top 200 chart for the U.S., various other countries, and as a global top chart, in addition to a 10-song “Discovery” chart for the U.S. and a smaller subset of other markets.

The Discovery Top 50 for Apple Music doesn’t currently match up with the online version of the Discovery chart, which may be related to the timing of its updates.

The launch of the new chart is another confirmation as to why Apple wanted to bring Shazam in-house — not for its nifty parlor trick of music recognition, but rather for the data it acquires on trending music. This gives Apple another means of competing with Spotify, whose own Artist dashboard launched exited beta back in 2017, giving it a big head start on serving artists and musicians with insights.

The new Shazam chart is being highlighted today in the Browse tab of the Apple Music app on iOS and Mac, and elsewhere in the app.