Eden Farm is a startup with the ambitious goal of building a food distribution network for Indonesia, where many restaurants currently rely on markets for fresh ingredients.

But this means high markups and unreliable supplies for restaurant owners and lower profits for farmers, co-founder and CEO David Gunawan tells TechCrunch. The company, part of Y Combinator’s current batch, wants to help both by simplifying the supply chain, ensuring stable pricing and reducing food waste. Eden Farm currently focuses on fresh produce and non-perishable items, but plans to expand its product line to meat and seafood, too.

The company launched in 2017 and now supplies produce from 60 farmers to more than 200 restaurants in six major cities: Jakarta, Tangerang, South Tangerang, Bekasi, Depok and Bogor. Eden Farm is currently raising an oversubscribed seed round. Gunawan says the target was originally intended to be $1 million, but has now increased to $1.75 million. Investors include Y Combinator and Everhaus.

Eden Farm started as a farm, but while talking to other farmers and researching the agricultural market, its founders realized there were many problems with food distribution in Indonesia.

“Every restaurant in Indonesia faces a huge problem with supply, stability and extreme price volatility,” Gunawan says. “Fruit and vegetable prices can go up and down around 30% to 50% every day. In peak season, for certain commodities, prices can go up 10 times, like chilis in the summer.”

Eden Farm tackles the problem of supply and demand with a mobile app that gives demand forecasts to farmers so they can plan their next harvests. Traditionally, farmers don’t sell produce directly to restaurants, Gunawan says. Instead, their harvest goes through several layers of middlemen before arriving at markets. 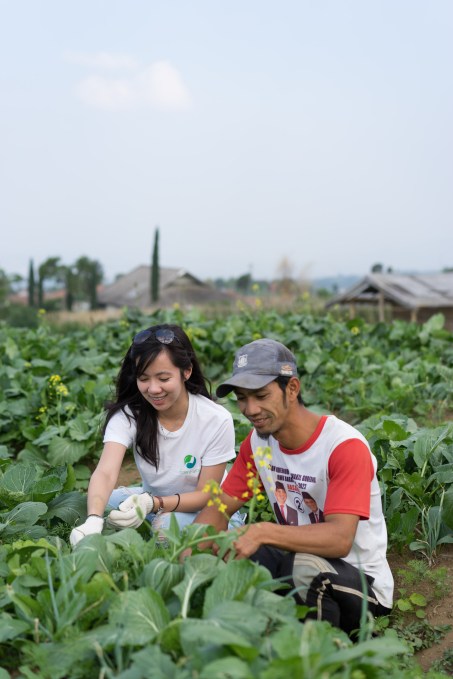 Eden Farm is able to ensure price stability and also allow farmers to make more profit by purchasing produce wholesale from them. On the demand side, Eden Farm’s value proposition includes quality control. Before produce is delivered to restaurants, it is inspected and washed. Gunawan says restaurants typically have to dispose around 30% of the produce they purchase from markets, but Eden Farm has a 100% guarantee and will refund the price of any produce that is unusable. It also partners with two large markets in Jakarta to help supply large quantities of vegetables and ensure there are enough supplies during peak season. Gunawan says Eden Farm’s quality control can help save restaurants up to 50%.

Eden Farm wants to build a network similar to Sysco, the American food distribution giant, but it has to solve several problems unique to Indonesia.

“We are serving a very traditional industry. Farmers already have their own way of planting and their own culture, which has lasted for generations, and we’re trying to change that,” says Gunawan. “At first we didn’t know how to talk to them, how to convince them, but we learned a lot about how to pay respect to farmers. Every time we go to a village, for example, we know how to present, who to pay respects to, like the elders there. We have to do that before the elders will introduce us to the farmers in the area.”

The company currently handles about half of its deliveries in-house and uses third-party logistics providers for the rest. Most produce is sourced from farms close to where it is sold so it can be delivered in less than 24 hours, but Eden Farm goes farther for some vegetables. For example, potatoes are purchased from farms in Central Java, while carrots come from North Sumatra.

Eden Farm works mostly with small, traditional farms, but it also carries produce like lettuce and kale from hydroponic farms. After finishing Y Combinator, Gunawan says the startup will begin focusing on expanding into five new cities: Bandung, Surabaya, Bali, Medan and Malang. As its order volumes increase, the company will begin focusing on smaller markets, and once it hits 25,000 restaurants, expand into meat and seafood.