Binks is a custom clothing startup created after co-founder and CEO Aamna Khan realized how frustrating it is to find well-fitting women’s workwear in Indian cities. Currently participating in Y Combinator’s accelerator program, Binks solves the problem by using computer vision and machine learning to provide customers with clothing sewn to their measurements, shipped in just three days.

Khan says shopping online is often difficult because a standardized Indian sizing chart hasn’t been developed yet. Clothing companies use a mix of U.S. and European size charts, often resulting in inaccurate sizing (Khan tells TechCrunch that the return rate for apparel ordered online in India can be as high as 30% to 40%, mostly because of fit issues). In big cities like Bangalore, where the company is based, there are a lot of tailors, but getting clothing fitted and sewn is a time-consuming process.

“The tailoring market has not moved with the times, so the experience of getting something tailored is the same as it was 10 years ago. You have to buy fabric, give your measurements to the tailor, then there are usually a couple of fittings, and all of this means physically visiting the shop,” Khan says. “It’s very tedious for Indian women who are leading a busy life but still want well-fitting clothes.”

Many Indian customers buy ready-made clothes and have them altered by a tailor or accept that if they order clothing online, a lot of it will need to be returned or exchanged. Companies that figure out a better way to sell clothing to women, however, stand to profit a lot. The women’s apparel market in India is worth $30 billion already and expected to grow quickly, becoming bigger than the men’s apparel market by 2025, according to research by Avendus Capital.

In a statement to TechCrunch, Adora Cheung, Binks’ Y Combinator partner, said “Indian fashion commerce looks very similar to the US today, with its high return rates and dead stock. Thanks to the inexpensive tailoring market in its backyard, India can look really different and we’re excited about that.” 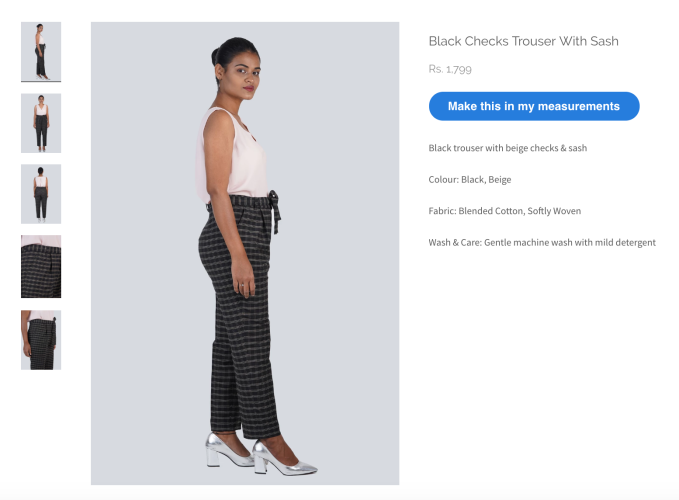 To order custom clothes, customers pick a style on Binks’ site (the average price of a garment is about USD $30) and fill out a form that includes questions about their height and bra size, what brands of tops and pants fit them best and which sizes from those brands they usually wear. Customers are also prompted to upload full-length photos of themselves taken from the front and side. Then a Binks consultant calls to discuss customizations before the order is finalized.

Binks uses computer vision to read body measurements, and combines them with the customer’s answers to customize clothing patterns. Orders are currently made by a single tailoring unit in Bangalore, but Binks’ plan is to automate pattern making, as many tailors still draft patterns by hand, so the company can maintain a standardized process for sizing and quality control as it scales up.

Binks is run by Khan, an experienced product manager, and co-founder Raj Vardhan, a data scientist. The two spent three years working together at online payments company Simpl before leaving to found the startup. After hosting physical pop-up stores in Bangalore, the company started taking online orders in June, and since then sales have doubled month over month, with 30% of customers placing a second order within the first month and a return rate of less than 1%, Khan says.

Binks takes a similar approach to RedThread, an American startup that also uses body scanning technology and algorithms to make customizing clothing more efficient. For the Indian market, Khan says Binks faces several specific challenges. For example, even though the National Institute of Fashion Technology is currently conducting a survey to create a standardized clothing chart for India, it won’t be ready for several years, so there isn’t an existing data set of Indian women’s measurements on which to train Binks’ algorithms. Brands use a mix of American and European standard sizing charts and many Indian women prefer looser clothing, making it even more difficult to accurately describe a garment’s fit online.

As more customers place orders, that will help make Binks’ technology be more accurate, Khan says. The next step is developing technology to streamline the tailoring process.

“We plan to make it super accurate and then at the next level scale it. We want to organize the dressmaking process in a way that has not been done using technology,” says Khan. “We want to automate it so that once a customer has selected a product, a pattern is produced and cutting is automated, so this reduces the turnaround time.”