India’s Reliance Jio, which has disrupted the local telecom and features phone markets in less than three years of existence, is ready to foray into many more businesses.

In a series of announcements Monday, which included a long-term partnership with global giant Microsoft, Reliance Jio said it will commercially roll out its broadband service next month; an IoT platform with ambitions to power more than a billion devices on January 1 next year; and “one of the world’s biggest blockchain networks” in the next 12 months — all while also scaling its retail and commerce businesses.

The service, which is being initially targeted at 20 million homes and 15 million businesses in 1,600 towns, will start rolling out commercially starting September 5. Ambani said more than half a million customers have already been testing the broadband service, which was first unveiled last year.

The broadband service will come bundled with access to hundreds of TV channels and free calls across India and at discounted rates to the U.S. and Canada, Ambani said. The service, the cheapest tier of which will offer internet speeds of 100Mbps, will be priced at Rs 700 (~$10) a month. The company said it will offer various plans to meet a variety of needs, including those of customers who want access to gigabit internet speeds.

Continuing its tradition to woo users with significant “free stuff,” Jio, which is a subsidiary of India’s largest industrial house (Reliance Industries) said customers who opt for the yearly plan of its fiber broadband will be provided with the set-top box and an HD or 4K TV at no extra charge. Specific details weren’t immediately available. A premium tier, which will be available starting next year, will allow customers to watch many movies on the day of their public release.

The company also announced a 10-year partnership with Microsoft to launch new cloud data centers in India to ensure “more of Jio’s customers can access the tools and platforms they need to build their own digital capability,” said Microsoft CEO Satya Nadella in a video appearance Monday. 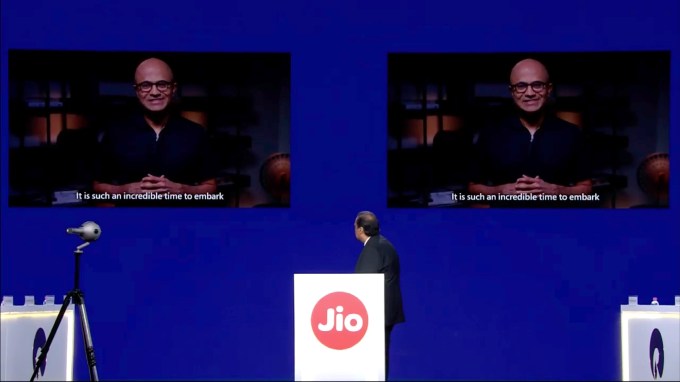 “At Microsoft, our mission is to empower every person and every organization on the planet to achieve more. Core to this mission is deep partnerships, like the one we are announcing today with Reliance Jio. Our ambition is to help millions of organizations across India thrive and grow in the era of rapid technological change.”

“Together, we will offer a comprehensive technology solution, from compute to storage, to connectivity and productivity for small and medium-sized businesses everywhere in the country,” he added.

As part of the partnership, Nadella said, Jio and Microsoft will jointly offer Azure, Microsoft 365 and Microsoft AI platforms to more organizations in India, and also bring Azure Cognitive Services to more devices and in 13 Indian languages to businesses in the country. The solutions will be “accessible” to reach as many people and organizations in India as possible, he added. The cloud services will be offered to businesses for as little as Rs 1,500 ($21) per month.

The first two data centers will be set up in Gujarat and Maharashtra by next year. Jio will migrate all of its non-networking apps to the Microsoft Azure platform and promote its adoption among its ecosystem of startups, the two said in a joint statement.

The foray into broadband business and push to court small enterprises come as Reliance Industries, which dominates the telecom and retail spaces in India, attempts to diversify from its marquee oil and gas business. Reliance Jio, the nation’s top telecom operator, has amassed more than 340 million subscribers in less than three years of its commercial operations.

Like other Silicon Valley companies, Microsoft sees massive potential in India, where tens of millions of users and businesses have come online for the first time in recent years. Cloud services in India are estimated to generate a revenue of $2.4 billion this year, up about 25% from last year, according to research firm Gartner. Microsoft has won several major clients in India in recent years, including insurance giant ICICI Lombard.

Ambani also said Reliance Retail, the nation’s largest retailer, is working on a “digital stack” to create a new commerce partnership platform in India to reach tens of millions of merchants, consumers and producers. Ambani said Reliance Industries plans to list both Reliance Retail and Jio publicly in the next years.

“We have received strong interests from strategic and financial investors in our consumer businesses — Jio and Reliance Retail. We will induct leading global partners in these businesses in the next few quarters and move towards listing of both these companies within the next five years,” he said.

The announcement comes weeks after Reliance Industries acquired for $42.3 million a majority stake in Fynd, a Mumbai-based startup that connects brick and mortar retailers with online stores and consumers. Reliance Industries has previously stated plans to launch a new e-commerce firm in the country.

Without revealing specific details, Ambani also said that Jio is building an IoT platform to control at least one billion of the two billion IoT devices in India by next year. He said he sees IoT as a $2.8 billion revenue opportunity for Jio. Similarly, the company also plans to expand its blockchain network across India, he said.

“Using blockchain, we can deliver unprecedented security, trust, automation and efficiency to almost any type of transaction. And using blockchain, we also have an opportunity to invent a brand-new model for data privacy where Indian data, especially customer data is owned and controlled through technology by the Indian people an d not by corporate, especially global corporations,” he added.