Lyft has announced an expansion of its new program designed to make airport pickups less confusing for riders and drivers alike, by directing riders to a designated pickup spot where they’ll show the driver a PIN code. The program is launching this weekend at New York’s LaGuardia Airport, the company says, and the plan to roll out a similar experience at other airports in the future still remains.

Starting on Saturday, July 20 at LaGuardia, users who request a Lyft ride won’t have to search for their vehicle at the usual and often busy pickup areas. Instead, they’ll be directed through the Lyft app to a designated Lyft pickup spot, located in the Terminal B Garage, Area G.

A screen will pop up after the user enters their ride request and destination that explains how to get to the Lyft pickup area, and will display a button that says “Get Code.” Riders tap this button for a unique code they’ll show their driver, which matches them to that ride.

This way, Lyft users can hop in the first available car as opposed to waiting for a particular driver to arrive. 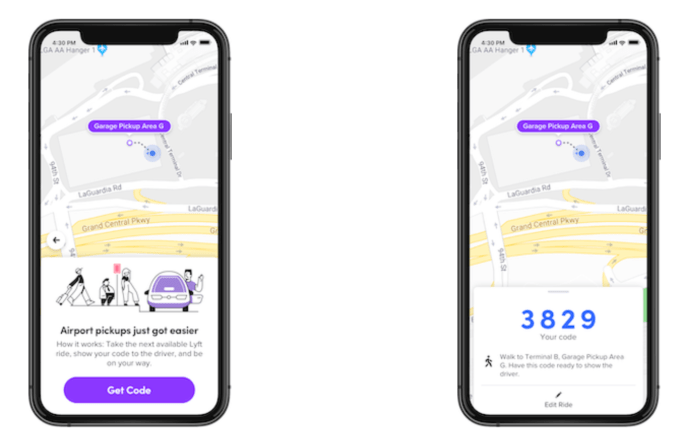 The company says it will have Lyft ambassadors on hand to assist as the new program rolls out.

The end result is effectively a ridesharing alternative to an airport taxi line. It also comes shortly after Lyft announced a similar program in May in partnership with the Portland International Airport (PDX), as did Uber. That made Portland the first U.S. airport to participate in Uber’s pilot, following its trials of PIN pickups in Bangalore.

LaGuardia, meanwhile, will be the first East Coast airport to offer such an option, according to reports.

Only standard Lyft rides are available for the feature, Lyft notes.

The company didn’t say which other airports will receive the feature in the future. But it may not always make sense, as it requires the airport to offer a designated pickup spot — and capacity for that could be limited in some cases. In addition, the location of the pickup spot plays a key role as to whether such a feature is even useful, as both Uber and Lyft are now finding out.

Both companies have been making the headlines in recent days due to their pickup problems at the San Francisco International Airport (SFO), following their move to a new pickup location. With wait times pushing 24-28 minutes, both services saw increased cancellations, according to local reports.

Meanwhile, LaGuardia has been experiencing all kinds of problems of its own, but related to construction. This included traffic backups that led to Uber and Lyft drivers getting stuck trying to get to the pickup spot. Because of these problems, LaGuardia may not have been the best airport for this latest expansion, as Lyft won’t know the feature’s true impact on efficiency for some time.