Google said today that it has started to display discounts from restaurants in its Maps app in India as the Mountain View giant works to expand its ever-growing reach and relevance in one of its key overseas markets.

The company today rolled out an update to add three new features to the Google Maps app in India. Users can now see a new “offers” option in the “explore tab” that will display promotional offers from local restaurants. Google said it has partnered with EazyDiner, a table reservation platform, to display offers from more than 4,000 restaurants. The feature is live in 11 metro cities in India.

Restaurant offers are just the beginning, as the company plans to ink deals with more partners and expand to more categories in the future, it said. Users can also book a table to a restaurant directly from the Maps app. Google did not reveal the financial agreement it had with EazyDiner, a five-year-old New Delhi-based startup that has raised more than $13 million to date. 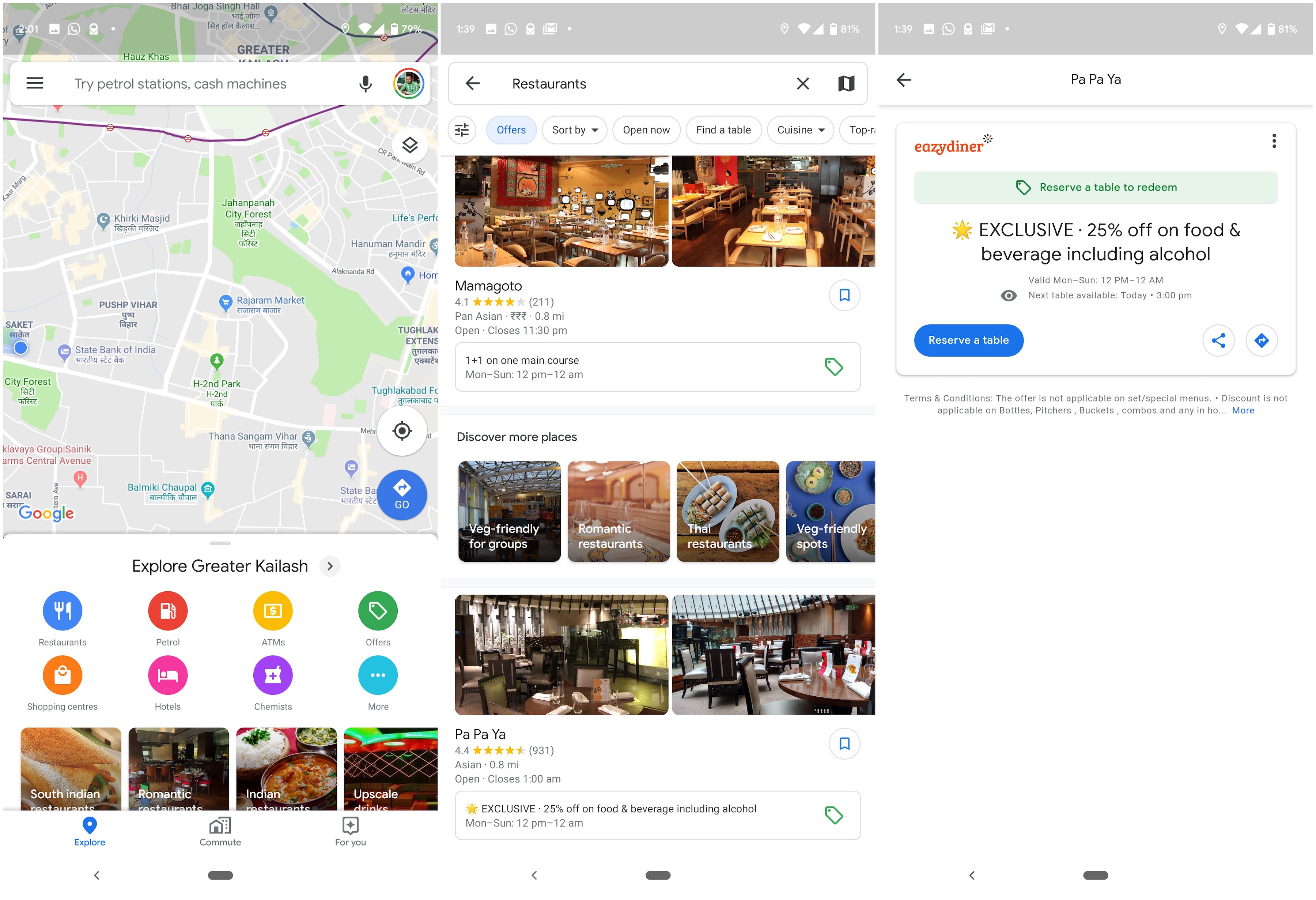 The new offering comes as Google explores ways to make more money off Google Maps. The company maintains a Google Maps Platform for enterprise customers, and has increased its access price over the years, but it has yet to monetize the consumer-facing part of the service in a significant way.

As part of today’s announcement, the company has also revamped the “explore tab” in India to “reflect the rich diversity of local neighborhoods and communities,” said Krish Vitaldevara and Chandu Thota, directors of Google Maps, in a blog post. As part of the fresh paint job, Google said it has added shortcuts to give users quick navigation to restaurants, ATMs, shopping, hotels, pharmacies and, of course, offers.

Additionally, there is also an option in the explore tab to get directions to top areas in each city. The company said it uses machine learning to identify these areas. “Besides your own city, you can also look up other Indian cities by just searching the city name — an easy way to get up to speed before you travel,” Vitaldevara and Thota wrote.

The third feature, dubbed “For You,” displays personalized recommendations for new restaurants and other trending places. Users in India can now also follow a business and get updates and news on events.

“This feature also uses the ‘Your Match’ score, which uses machine learning to combine what we know about millions of places with the information you’ve added — restaurants you’ve rated, cuisines you’ve liked, and places you have visited. The first time you use this feature you can select the areas/localities you are interested in, and get more personalized and relevant recommendations over time,” the executives wrote.

Google continues to bulk up its Maps offerings in India. In recent months, it has added the ability to check if a cab goes off the usual route, and look for real-time status of trains and buses, among other features.

The company, which has amassed more than 300 million users in India, continues to use the nation as a testbed for many of its services. This approach has helped Google, which operates the Android mobile operating system that runs on 98% of smartphones in India, gain wide adoption in the country.

But it has also instilled an antitrust probe on its influence in the nation.

India’s Android antitrust case against Google may have some holes