App store spending is continuing to grow, although not as quickly as in years past. According to a new report from Sensor Tower, the iOS App Store and Google Play combined brought in $39.7 billion in worldwide app revenue in the first half of 2019 — that’s up 15.4% over the $34.4 billion seen during the first half of last year. However, at that time, the $34.4 billion was a 27.8% increase from 2017’s numbers, then a combined $26.9 billion across both stores.

The major factor in the slowing growth is iOS in China, which contributed to the slowdown in total growth. However, Sensor Tower expects to see China returning to positive growth over the next 12 months, we’re told.

To a smaller extent, the downturn could be attributed to changes with one of the top-earning apps across both app stores: Netflix.

Last year, Netflix dropped in-app subscription sign-ups for Android users. Then, at the end of December 2018, it did so for iOS users, too. That doesn’t immediately drop its revenue to zero, of course — it will continue to generate revenue from existing subscribers. But the number will decline, especially as Netflix expands globally without an in-app purchase option, and as lapsed subscribers return to renew online with Netflix directly.

In the first half of 2019, Netflix was the second highest earning non-game app with consumer spending of $339 million, Sensor Tower estimates, down from $459 million in the first half of 2018. (We should point out the firm bases its estimates on a 70/30 split between Netflix and Apple’s App Store that drops to 85/15 after the first year. To account for the mix of old and new subscribers, Sensor Tower factors in a 25% cut. But Daring Fireball’s John Gruber claims Netflix had a special relationship with Apple where it had an 85/15 cut from year one.)

In any event, Netflix’s contribution to the app stores’ revenue is on the decline.

In the first half of last year, Netflix had been the No. 1 non-game app for revenue. This year, that spot went to Tinder, which pulled in an estimated $497 million across the iOS App Store and Google Play, combined. That’s up 32% over the first half of 2018. 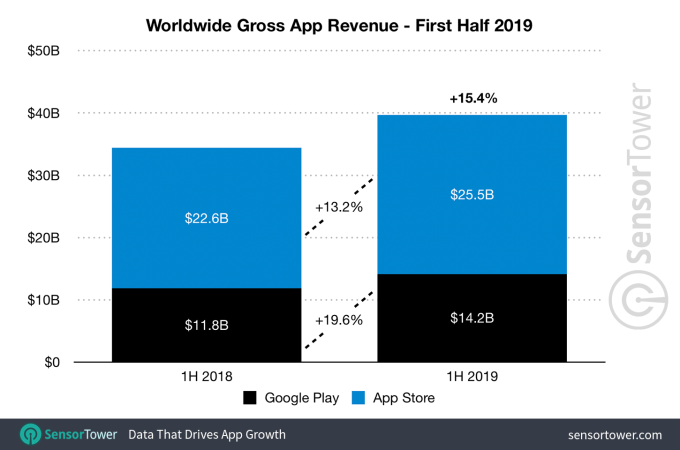 But Tinder’s dominance could be a trend that doesn’t last.

According to recent data from eMarketer, dating app audiences have been growing slower than expected, causing the analyst firm to revise its user estimates downward. It now expects that 25.1 million U.S. adults will use a dating app monthly this year, down from its previous forecast of 25.4 million. It also expects that only 21% of U.S. single adults will use a dating app at all in 2019, and that will only grow to 23% by 2023.

That means Tinder’s time at the top could be overrun by newcomers in later months, especially as new streaming services get off the ground (assuming they offer in-app subscriptions); if TikTok starts taking monetization seriously; or if any other large apps from China find global audiences outside of China’s third-party app stores.

For example, Tencent Video grossed $278 million globally in the first half of 2019, outside of the third-party Chinese Android app stores. That made it the third-largest non-game app by revenue. And Chinese video platform iQIYI and YouTube were the No. 4 and No. 5 top-grossing apps, respectively.

Meanwhile, iOS app installs actually declined in the first half of the year, following the first quarter that saw a decline in downloads, Q1 2019, attributed to the downturn in China.

Google Play installs in the first half of the year grew 16.4% to 41.9 billion, or about 2.8 times greater than the iOS volume. 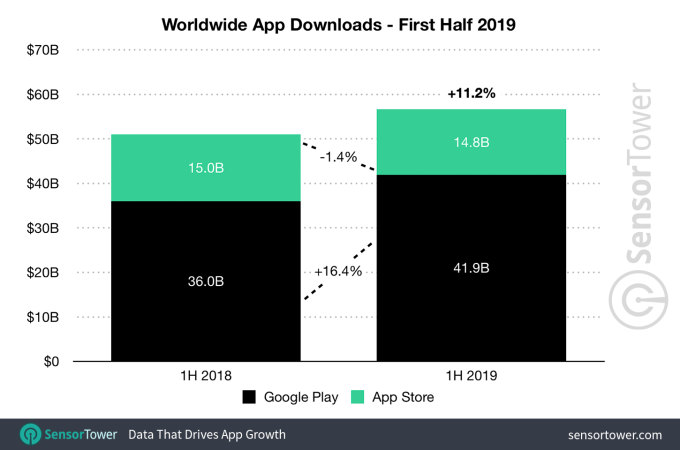 The most downloaded apps in the first half of 2019 were the same as before: WhatsApp, Messenger and Facebook led the top charts. But TikTok inched ahead of Instagram for the No. 4 spot, and it saw its installs grow around 28% to nearly 344 million worldwide.

In terms of mobile gaming specifically, spending was up 11.3% year-over-year in the first half of 2019, reaching $29.6 billion across the iOS App Store and Google Play. Thanks to the fallout of the game licensing freeze in China, App Store revenue growth for games was at $17.6 billion, or 7.8% year-over-year growth. Google Play game spending grew by 16.8% to $12 billion. 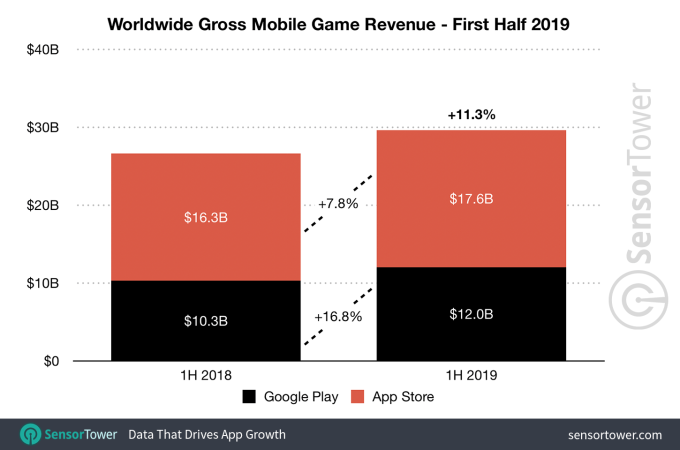