Google Maps just got a lot more useful for commuters. The company today announced a pair of updates for its mapping application — one that will offer live traffic delays for buses in the cities where it didn’t already provide real-time updates, and another that will tell you how crowded your bus, train, or subway car will be.

The latter is perhaps the more interesting of the two, as it represents a new prediction technique Google has been perfecting for over half a year. Starting in October, the company began to ask Google Maps users to rate their journey if they had traveled during peak commuting hours of 6 am to 10 am. Google asked about how many seats were available or if it was standing room only, in order to identify which lines had the highest number of crowdedness reports. 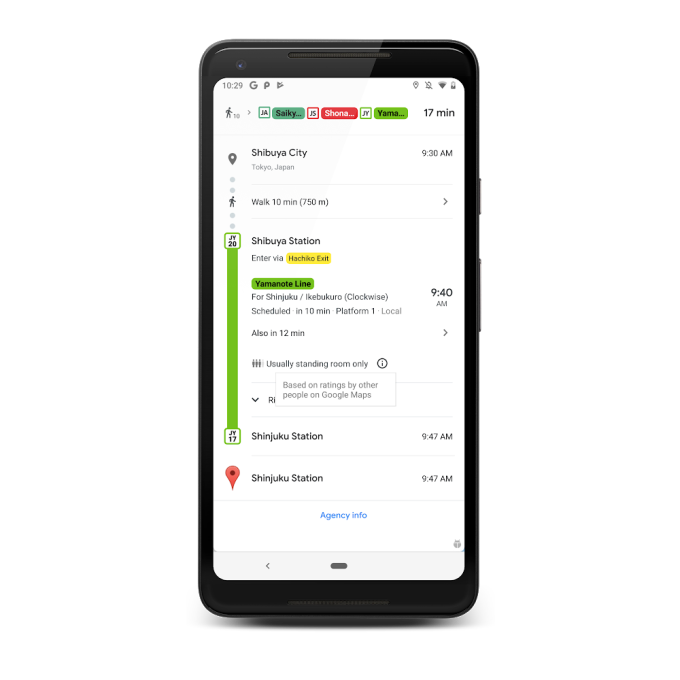 Over time, it was able to model this data into a new prediction capability designed to tell transit riders how packed their bus or train would be.

It also used this data to create rankings of the most crowded routes and stops around the world.

Buenos Aires and Sao Paulo dominated the rankings for the most-crowded transit lines, as each city had 3 lines in the top 10. Meanwhile, New York’s L train is the only one in the U.S. to rank in the top 10.

This isn’t the first time Google has used its massive Maps footprint to make predictions about crowds. The company had already introduced similar features for predicting the size of the crowd at restaurants and other retail locations.

In addition, Google today expanded its ability to alert bus riders to delays.

In December 2017, the company began offering real-time information provided by local transit agencies to transit riders. But this data wasn’t available in all cities. To address the problem, Google is launching live traffic delays in those markets where the information has been lacking — like Atlanta, GA.

To make its predictions, Google is combining the bus route details with the data it’s collecting from users who have consented to anonymized data sharing. This is the same data collection mechanism it uses to predict the crowds at local businesses today. Essentially, the company is turning Google Maps into a powerful tool to understand the movement of people in the world. But many users may not know they’ve been opted into this data-sharing by default. In fact, they probably will think the transit data is coming from the city — not from the app installed on their phone and millions of others.

In any event, users will now be able to see the bus delays, how long the delay will be, and adjusted travel times based on these live conditions.

Google says the new features are rolling out on Google Maps in nearly 200 cities worldwide on both Android and iOS today.