Among the many spacecraft and satellites ascending to space on Monday’s Falcon Heavy launch, the Planetary Society’s LightSail 2 may be the most interesting. If all goes well, a week from launch it will be moving through space — slowly, but surely — on nothing more than the force exerted on it by sunlight.

LightSail 2 doesn’t have solar-powered engines, or use solar energy or heat for some secondary purpose; it will literally be propelled by the physical force of photons hitting its immense shiny sail. Not solar wind, mind you — that’s a different thing altogether.

It’s an idea, explained Planetary Society CEO and acknowledged Science Guy Bill Nye said in a press call ahead of the launch, that goes back centuries.

“It really goes back to the 1600s,” he said; Kepler deduced that a force from the sun must cause comet tails and other effects, and “he speculated that brave people would one day sail the void.”

So they might, as more recent astronomers and engineers have pondered the possibility more seriously.

“I was introduced to this in the 1970s, in the disco era. I was in Carl Sagan’s astronomy class… wow, 42 years ago, and he talked about solar sailing,” Nye recalled. “I joined the Planetary Society when it was formed in 1980, and we’ve been talking about solar sails around here ever since then. It’s really a romantic notion that has tremendous practical applications; there are just a few missions that solar sails are absolutely ideal for.” 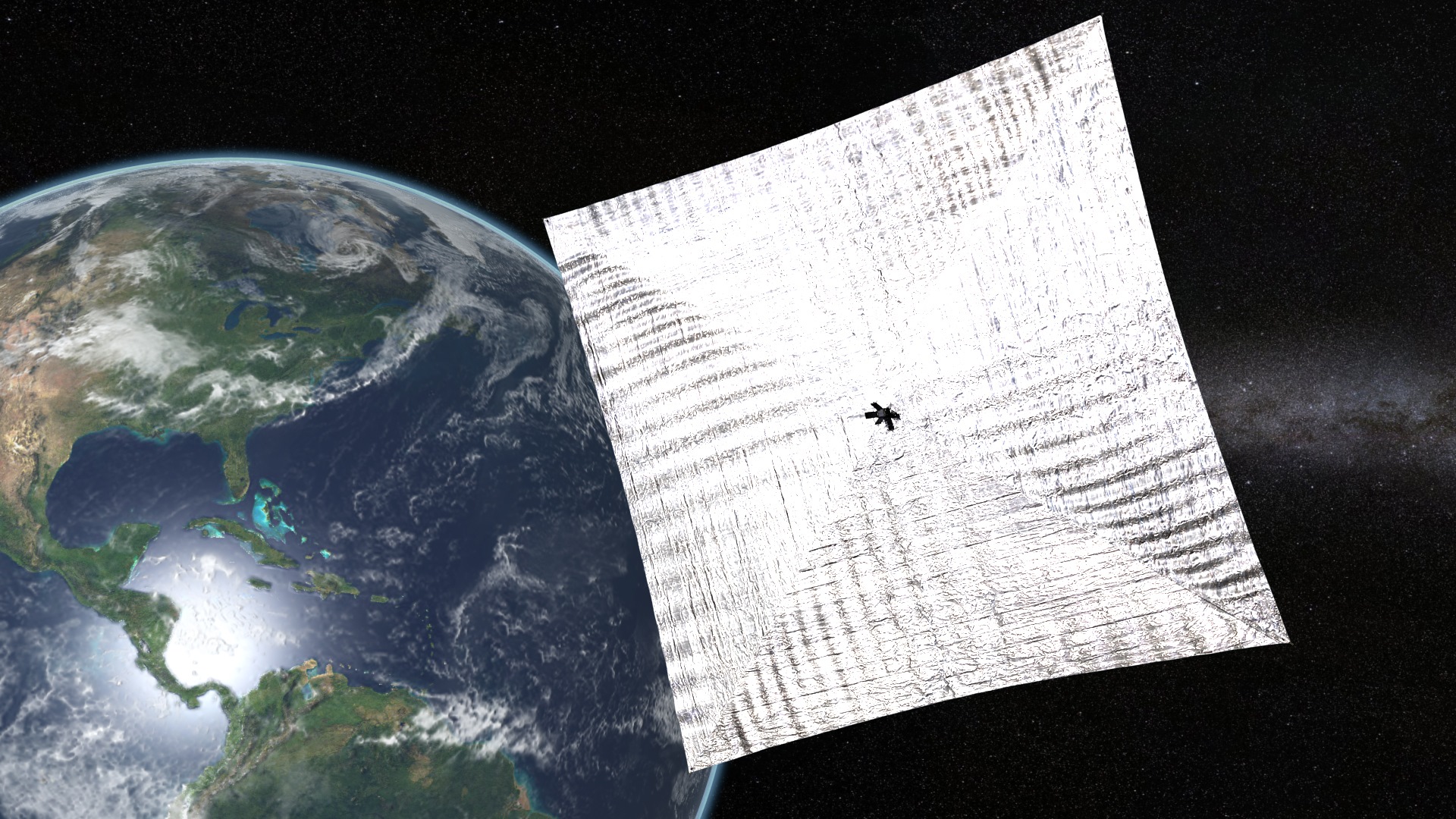 Those would primarily be long-term, medium-orbit missions where a craft needs to stay in an Earth-like orbit, but still get a little distance away from the home planet — or, in the future, long-distance missions where slow and steady acceleration from the sun or a laser would be more practical than another propulsion method.

The eagle-eyed among you may have spotted the “2” in the name of the mission. LightSail 2 is indeed the second of its type; the first launched in 2015, but was not planned to be anything more than a test deployment that would burn up after a week or so.

That mission had some hiccups, with the sail not deploying to its full extent and a computer glitch compromising communications with the craft. It was not meant to fly via solar sailing, and did not.

“We sent the CubeSat up, we checked out the radio, the communications, the overall electronics, and we deployed the sail and we got a picture of that deployed sail in space,” said COO Jennifer Vaughn. “That was purely a deployment test; no solar sailing took place.” 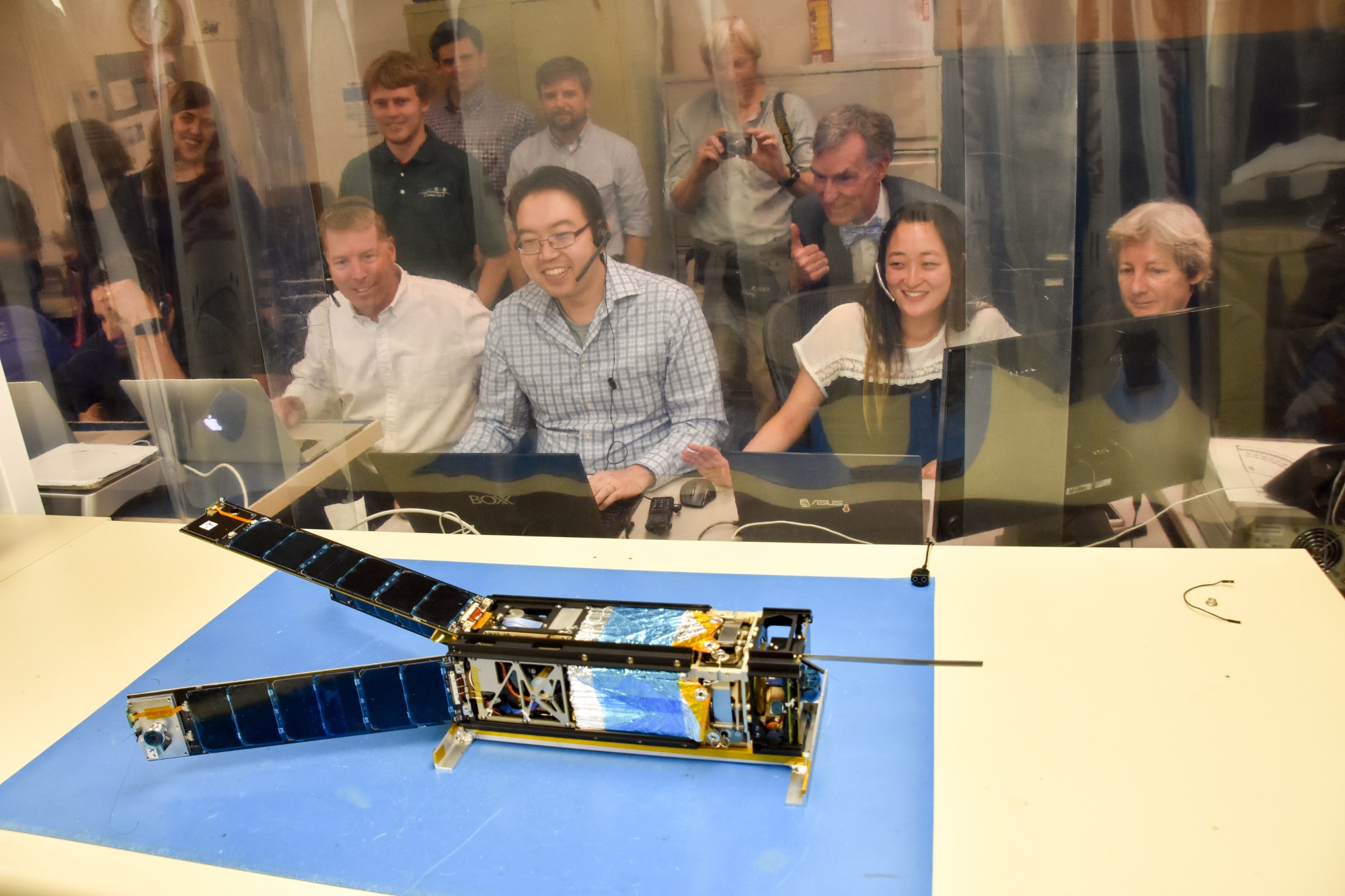 The spacecraft itself, minus the sail, of course.

But it paved the way for its successor, which will attempt this fantastical form of transportation. Other craft have done so, most notably JAXA’s IKAROS mission to Venus, which was quite a bit larger — though as LightSail 2’s creators pointed out, not nearly as efficient as their craft — and had a very different mission.

The brand new spacecraft, loaded into a 3U CubeSat enclosure — that’s about the size of a loaf of bread — is piggybacking on an Air Force payload going up to an altitude of about 720 kilometers. There it will detach and float freely for a week to get away from the rest of the payloads being released.

Once it’s safely on its own, it will fire out from its carrier craft and begin to unfurl the sail. From that loaf-sized package will emerge an expanse of reflective Mylar with an area of 32 square meters — about the size of a boxing ring. 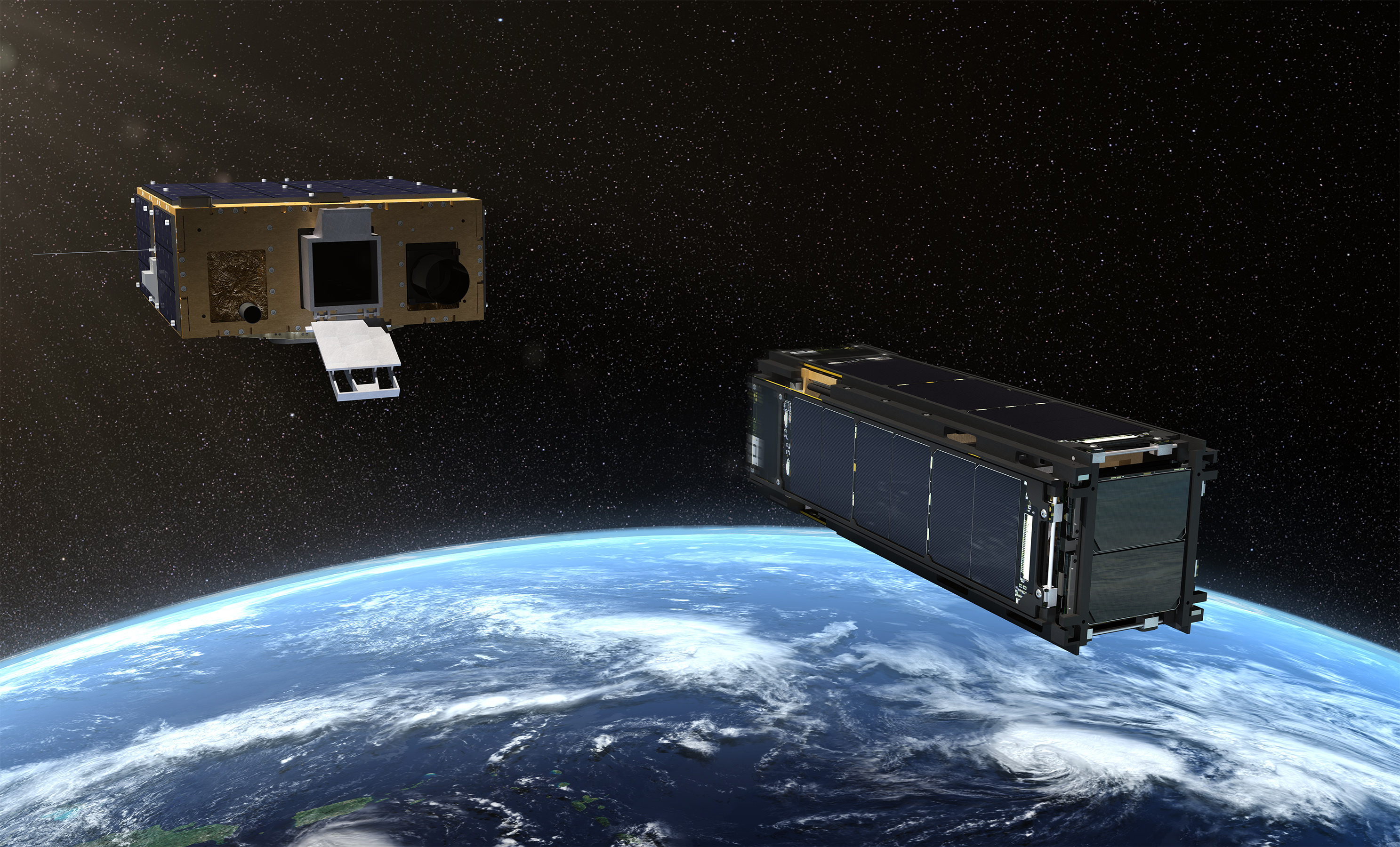 Inside the spacecraft’s body is also what’s called a reaction wheel, which can be spun up or slowed down in order to impart the opposite force on the craft, causing it to change its attitude in space. By this method LightSail 2 will continually orient itself so that the photons striking it propel it in the desired direction, nudging it into the desired orbit.

The thrust produced, the team explained, is very small — as you might expect. Photons have no mass, but they do (somehow) have momentum. Not a lot, to be sure, but it’s greater than zero, and that’s what counts.

“In terms of the amount of force that solar pressure is going to exert on us, it’s on the micronewton level,” said LightSail project manager Dave Spencer. “It’s very tiny compared to chemical propulsion, very small even compared to electric propulsion. But the key for solar sailing is that it’s always there.”

“I have many numbers that I love,” cut in Nye, and detailed one of them: “It’s nine micronewtons per square meter. So if you have 32 square meters you get about a hundred micronewtons. It doesn’t sound like much, but as Dave points out, it’s continuous. Once a rocket engine stops, when it runs out of fuel, it’s done. But a solar sail gets a continuous push day and night. Wait…” (He then argued with himself about whether it would experience night — it will, as you see in the image below.)

Bruce Betts, chief scientist for LightSail, chimed in as well, to make the numbers a bit more relatable: “The total force on the sail is approximately equal to the weight of a house fly on your hand on Earth.”

Yet if you added another fly every second for hours at a time, pretty soon you’ve got a really considerable amount of acceleration going on. This mission is meant to find out whether we can capture that force.

“We’re very excited about this launch,” said Nye, “because we’re going to get to a high enough altitude to get away from the atmosphere, far enough that we’ll really gonna be able to build orbital energy and take some, I hope, inspiring pictures.”

The LightSail going up this week has some improvements over the last one, though overall it’s largely the same — and a relatively simple, inexpensive craft at that, the team noted. Crowdfunding and donations over the last decade have provided quite a bit of cash to pursue this project, but it still is only a small fraction of what NASA might have spent on a similar mission, Spencer pointed out.

“This mission is going to be much more robust than the previous LightSail 1, but as we said previously, it’s done by a small team,” he said. “We’ve had a very small budget relative to our NASA counterparts, probably 1/20th of the budget that a similar NASA mission would have. It’s a low-cost spacecraft.” 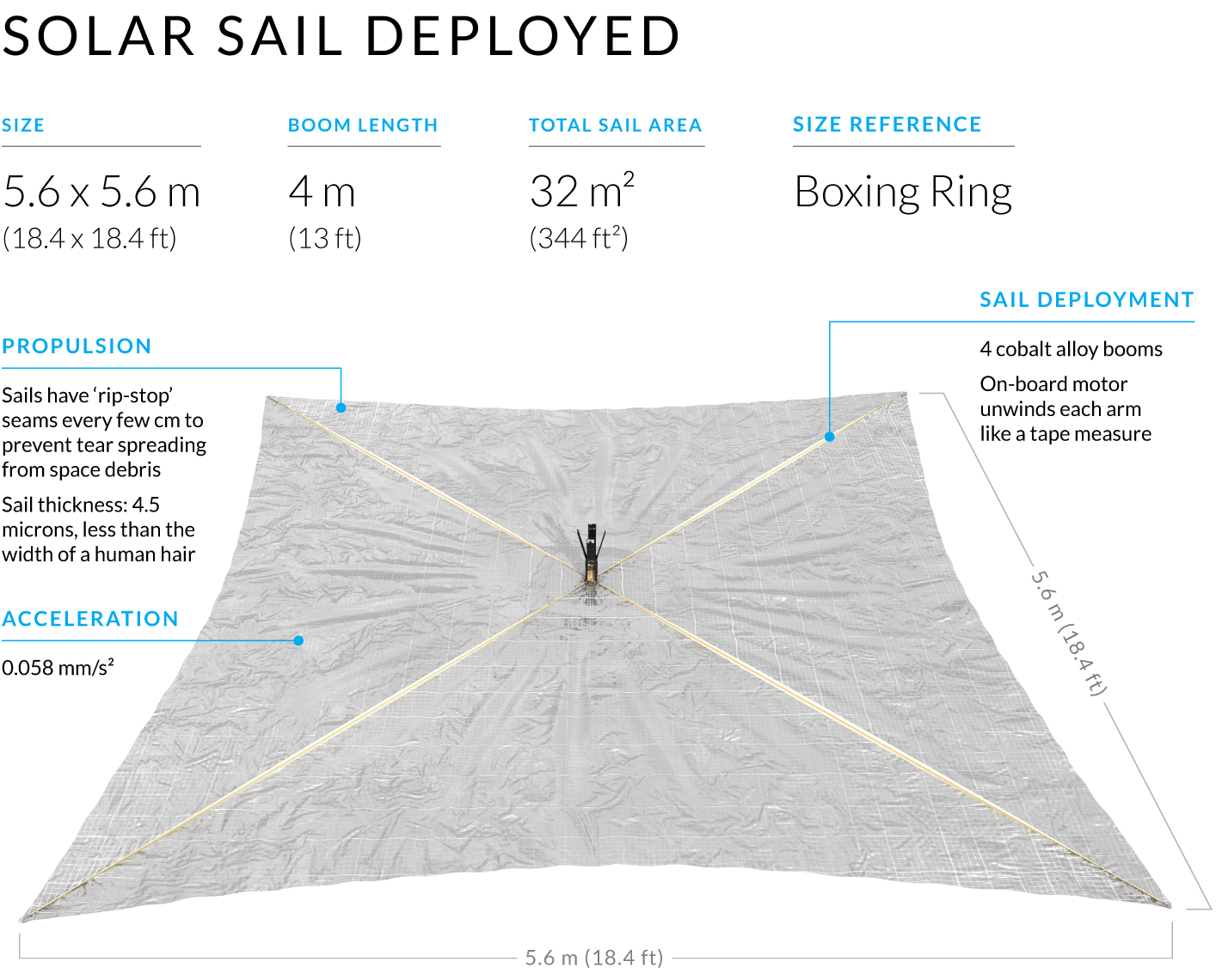 But the improvements are specifically meant to address the main problems encountered by LightSail 2’s predecessor.

Firstly, the computer inside has been upgraded to be more robust (though not radiation-hardened) and given the ability to sense faults and reboot if necessary — they won’t have to wait, as they did for LightSail 1, for a random cosmic ray to strike the computer and cause a “natural reboot.” (Yes, really.)

The deployment of the sail itself has also improved. The previous one only extended to about 90% of its full width and couldn’t be adjusted after the fact. Subsequently tests have been done, Betts told me, to exactly determine how many revolutions the motor must make to extend the sail to 100%. Not only that, but they have put markings on the extending booms or rods that will help double check how deployment has gone.

“We also have the capability on orbit, if it looks like it’s not fully extended, we can extend it a little bit more,” he said.

Once it’s all out there, it’s uncharted territory. No one has attempted to do this kind of mission, even IKAROS, which had a totally different flight profile. The team is hoping their sensors and software are up to the task — and it should be clear whether that’s the case within a few hours of unfurling the sail.

It’s still mainly an experiment, of course, and what the team learns from this they will put into any future LightSail mission they attempt, but also share it with the spaceflight community and others attempting to sail on sunlight.

“We all know each other and we all share information,” said Nye. “And it really is — I’ve said it as much as I can — it’s really exciting to be flying this thing at last. It’s almost 2020 and we’ve been talking about it for, well, for 40 years. It’s very, very cool.”

LightSail 2 will launch aboard a SpaceX Falcon Heavy no sooner than June 24th. Keep an eye on the site for the latest news and a link to the live stream when it’s almost time for takeoff.